7 Popular LGBT-Run Restaurants You Need to Try in NYC 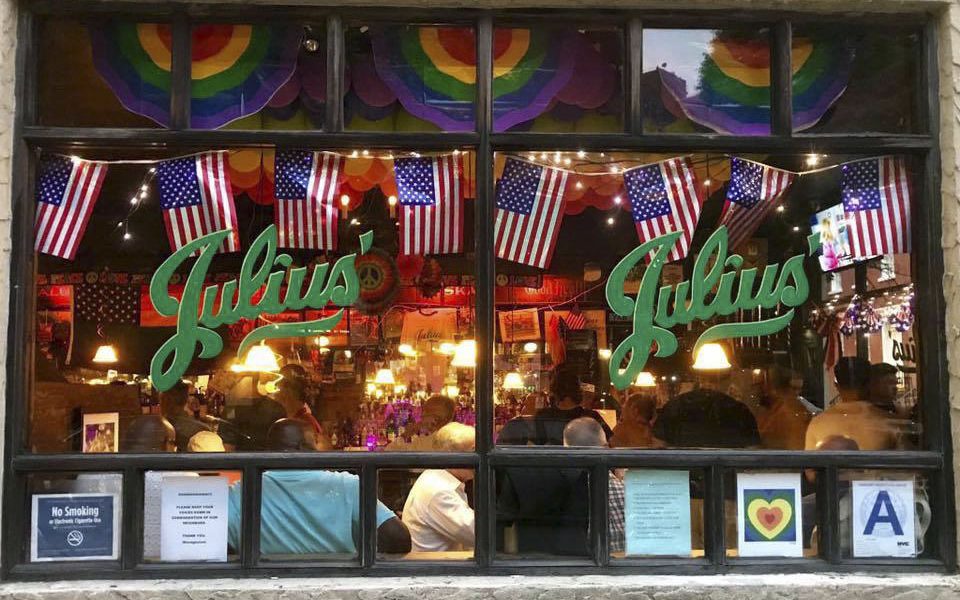 New York’s complex restaurant culture has seen a slow rise of LGBTQ+ chefs and restaurateurs in kitchens across the city. These out figures are leading the way toward progress, and your patronage at their restaurants supports the movement in this industry and beyond! Below are 7 food spots with chefs and owners who belong proudly to the LGBTQ+ community.

Although Julius is technically a gay bar—the oldest one in the city, at that—it serves some pretty great food. Get a fantastically greasy burger, and join older locals escaping the millennial mobs at Stonewall Inn around the corner. After dinnertime, the DJ starts, and the dance floor will fill up quick. The third Thursday of every month, theater legend John Cameron Mitchell (of Hedwig and the Angry Inch) throws themed parties collectively known as “Mattachine” Parties. Also note Julius is cash only. 159 W 10th St., 877-746-0528 , juliusbarny.com

A perennial brunch spot in the East Village, Prune is helmed by celebrated chef Gabrielle Hamilton. Hamilton serves up creative, pan-European dishes like blistered squid with housemade pork sausage, a terrific Monte Cristo, and spaghetti carbonara. Each weekend, you’ll hit a long line and at least an hour wait at brunch, so it’s probably best to come by on a weekday or in the evening. Fun fact: Hamilton wrote a memoir called Blood, Bones, and Butter: The Inadvertent Education of a Reluctant Chef, which won the James Beard Award for Writing and Literature and which frankly discusses her relationships with women. 54 E 1st St., 212-677-6221 , prunerestaurant.com

Three of New York’s best gayborhoods—Chelsea, the East Village, and Park Slope in Brooklyn—just happen to have a Fonda location. This Mexican eatery is run by James Beard-nominated chef Roberto Santibanez. Get your guac and chips and pineapple margs to start. Tasty mains include veggie enchiladas and pollo norteño in a piping hot skillet. Chelsea: 189 9th Ave., 917-525-5252 ,  fondarestaurant.com

Partners Doug Quint and Bryan Petroff opened the first Big Gay Ice Cream shop in the East Village on East 7th Street. Lines ran out the door for delights like the Salty Pimp, a vanilla/dulce-du-leche soft serve dipped in salty chocolate. Other treats include the Nilla Wafer crumb-covered Dorothy cone, Truckers ice cream sandwiches, and Gobbler sundaes. Big Gay has since expanded to the West Village, South Street Seaport, a series of food carts, and a shop in Philadelphia. They also sell their yummy flavors by the pint in stores throughout the city. East Village: 125 E 7th St., 212-533-9333, West Village: 61 Grove St., biggayicecream.com

We just got our ch-ch-cherry back! Our special flavor this week (Tuesday through Sunday, all shops) is Cherry Kool Aid. That means in addition to Kool Aid Kones we’ll making Koke Floats (Kool Aid and Mexican Coca-Cola) and Kool Aid Milkshakes. It also means cherry dip is on the menu. Lead photo is by @donnytsang.

Go for the lesbian-run kitchen and stay for the black truffle pasta at Via Carota. Run by partners Jody Williams and Rita Sodi, this Italian eatery in the West Village is a mild-mannered alternative to other, sceny-er restaurants in the area. But be prepared for a wait, as Via Carota does not take reservations. Consider their creative cocktails like the Contessa or a classic negroni and the pappardelle pasta with wild boar ragu. Also, be sure to listen when your server describes the pasta special: another standout! For more of Williams and Sodi, try other West Village favorites Buvette and I Sodi. 51 Grove St., 212-255-1962 , viacarota.com

Vic’s is your go-to in Noho if you’re in the market for Neapolitan pizza and cacio e pepe pasta. Chef Hillary Sterling has maintained an approachable and diverse menu, whether you’re a paleo eater (go for the roasted chicken entree) or a pasta-holic. The sesame garlic bread with goat butter sounds pretty terrific, but diners swoon over the heirloom carrots with dill, capers, and shallots. At brunch, go for the slightly spicy Eggs, Greens & Grains or one of their three pizza flavors on offer. 31 Great Jones St., 212-253-5700 , vicsnewyork.com

You may run across a million bagels on any given morning in New York, but if you’re looking for a proud breakfast, go to Baz. These artisanal, New York-style bagels are made with love daily and are served all day from this adorable shop in Little Italy. Have their bagel with lox and cream cheese, called the Rainbow Kitty, or one of their flagels (flat bagels). They also served latkes, gluten-free bagels, and coffee and tea to-go. Baz is operated by proud Jewish/Italian restaurateur Bari Musacchio. 181 Grand St., 212-335-0609 , bazbagel.com

🐟🌱The delicate art of our homemade Dill Cured #Gravlax 🐟🌱 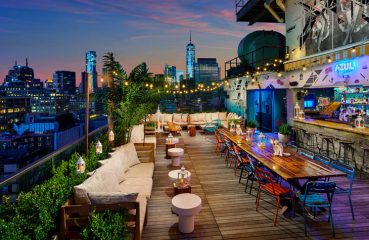 19 Best Rooftop Bars in NYC You Need to Visit

There’s nothing like a room with a view in New York City. Better yet, an outdoor space where you can bask in the sun and drink in the city at night. One glimpse of the skyline... 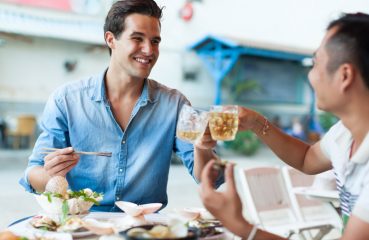 24 Outdoor Restaurants in NYC You Need to Try Right Now

During Summers in New York, you can eat almost every meal outside, whether on a rooftop, a patio, backyard, or boat. Here are 24 fantastic places to eat and drink out of doors in...