A Candid Conversation with Cyndi Lauper: Off-Road and Detouring 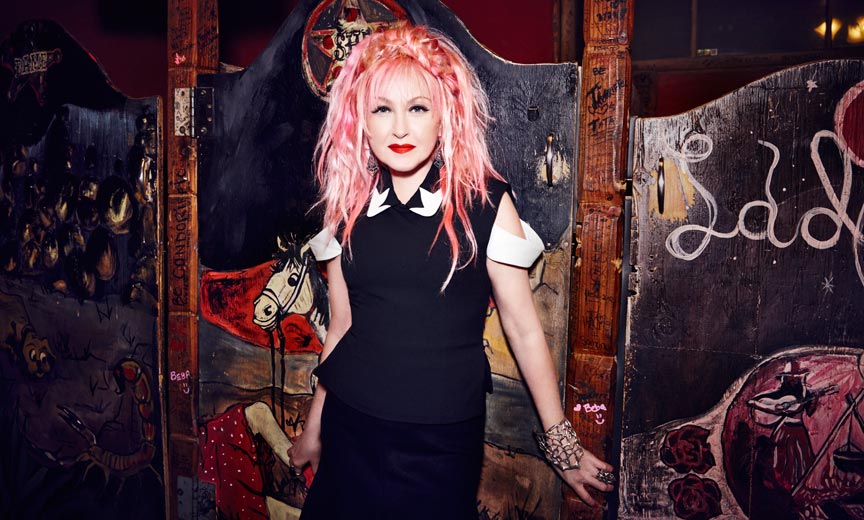 As Cyndi Lauper releases music in another unexpected genre, she talks to us about the appeal of Kinky Boots, her continuing work on behalf of gay youth, and which country superstar she really wants to duet with.

Cyndi Lauper’s career has been so unusual from the outset, and her new album — a collection of country classics entitled Detour — is her latest left turn. Lauper spoke with us as she geared up to take her latest music on a U.S. tour, and just after Kinky Boots (for which she wrote music and lyrics) received the London theater world’s top honor.

First of all, congratulations on your Kinky Boots win at the Oliviers! Do awards still make you nervous at this point in your career?
When I first heard about the nominations, I got super excited but certainly not nervous. Not even at rehearsals, during the day leading up the awards, or even on the carpet. But then when the category was being announced, I have to say I definitely got butterflies. And we won Best Musical! How amazing! [laughs]

The Broadway production recently became the longest-running show to play the Al Hirschfeld Theatre! Are you surprised that a musical about a drag queen selling boots to other drag queens has found such mainstream success?
At the end of the day, it’s not about men in dresses. It’s a very common life that everyone can identify with, wanting to be loved and accepted on your own terms. Isn’t that what we all want?

The True Colors Residence for homeless LGBT young people will be five years old this September, which is very cool. How has the project grown over those five years?
Well, it’s residences ­— there are two now! The first one is in Harlem, and the new one is in the Bronx and opened last year. Colleen Jackson — the executive director of West End Residences [and] who created and runs the True Colors Residences — is incredible and has plans for there to be one in every borough. Knowing her, she will make it happen. It is such an important effort. The residences provide 60 LGBT youths who’ve experienced homelessness with long-term supportive housing as they work to become independent and happy adults without the pressure of a time limit hanging over their heads.

Why did you choose kids to be the beneficiaries of your LGBT activism efforts?
When I learned that up to 40 percent of youth experiencing homelessness in America are LGBT — while only 7 percent of the general youth population is LGBT — the decision to focus my energy to help them was quick and easy. These are our kids: they are our future doctors, teachers, parents, and so much more. We have a responsibility to stand up for them and with them and to make sure they can be the happy, healthy and productive adults they want and deserve to be. Most importantly, these are incredible kids. I have had the honor to meet so many young people over the years and to work with many young people through the True Colors Fund. They are the most resilient and inspiring people you will ever meet. How could I not do my part — to do all that I can to help?

Things have improved so much in the last couple of years for gay kids and adults, especially after recent big Supreme Court decisions. How have you seen your role as an activist change in recent years? What do you see as our next steps?
We have definitely had some big wins and we need to celebrate them all, but we still have a lot of work to do, especially when it comes to the most marginalized in the LGBT community, like our young people who are at risk of or experiencing homelessness and who are mostly youth of color. … When you focus on the most marginalized groups within the community and make sure that they are okay and treated equally, then the entire LGBT community benefits.

Like many of your fans, I was exposed to a whole new genre of music because of your last album, Memphis Blues.
That’s great to hear!

Do you expect a similar reaction with the music of Detour?
Country music back in the ‘50s and ‘60s was pop music. These were songs that were hits all across the country, in rural and urban areas. So when I was real young, that’s what was playing on the radio. It’s kind of like what’s happening on country radio now: it’s very mainstream. … I really liked the idea of doing a companion record to Memphis Blues. … I had been doing a lot of writing, but for a new musical, not songs for me to record. And when I started listening, I found that the songs I was most moved toward were songs from the same era as the blues record. Seymour [Stein, president of Sire Records] explained that the golden era of country, which the songs off Detour are from, was happening at the same time as the era of Memphis Blues. It was when segregation was still very deep, especially on radio. But the cool thing was (and this is before Elvis, Jerry Lee, Wanda Jackson and acts like that kicked the door down and merged the two sounds) the blues and country guys were listening to each other. When you listen closely to them, you’ll hear it.

Really? Country music was popular when you were growing up in Queens?
Oh yeah! We loved it. We all had cowboy hats and pony sticks.

Once you chose classic country as a theme, you must have had a fairly large catalogue to choose from. How did you narrow it down to the tracks that make up Detour?
We took our time. I listened to, literally, over 1,000 songs. Seymour sent songs; my manager sent me great songs; friends who knew I was making this record sent me songs. It’s not like we were in a big rush, so I just took my time and listened ‘til I found the songs would make a great record: the songs that told stories and that I could sing well.

But then, on an album of mostly older classics, “Hard Candy Christmas” stands out as more recent. Did you and Dolly chat about recording that? Are you guys pals? (I warn you, though: Say yes, and the gay world might explode.)
Well, it’s a bonus track. The label asked me to do a Christmas song, and it’s the best Christmas song ever. So it was a way for me to have Dolly, in spirit, on the record. I love her music so much. Dolly and I know each other. We are not friends, per se, but we do know each other and have a very sweet relationship. She is just so lovely and kind. It is still number one on my bucket list to sing with Dolly Parton one day.

Why was it important to you to record this album in Nashville?
There is no other place I would rather be to record this album. Nashville is the heart of country music, and — like with my pilgrimage to Memphis — it would have not felt authentic to do it anywhere else. It’s about the musicians. I went to Nashville for the musicians just like I went to Memphis for the band there. It’s really the last great music city. Music is everywhere in Nashville.

I’m traveling to Nashville this summer. What can’t I miss?
Honky-tonks on Lower Broad and hot chicken. I don’t eat meat, but my manager is obsessed.

I know you’re taking this album on the road. [Cities, dates, and tickets here.] Will you perform the old favorites on this show, too? Will they get a country makeover?
I will perform the songs from Detour, of course. I may sneak a steel guitar line in here and there. [laughs] But I will always do my hits and fan faves, too. Boy George is also going to do seven of the shows with me. It’s gonna be a riot! And I have a few surprises in the hat. You’ll have to come and see for yourself.

You’re one statue away from the coveted EGOT. How do we get you that damn Oscar?
I’m workin’ on it, believe me!

In an interview with Entertainment Weekly, heartthrob actor Colton Haynes has come out, and says that his open secret is now just… open....

Joan Rivers: Come and Get These Memories

Some of Joan Rivers’ possessions are set to be auctioned at Christie’s in New York from June 16-23....