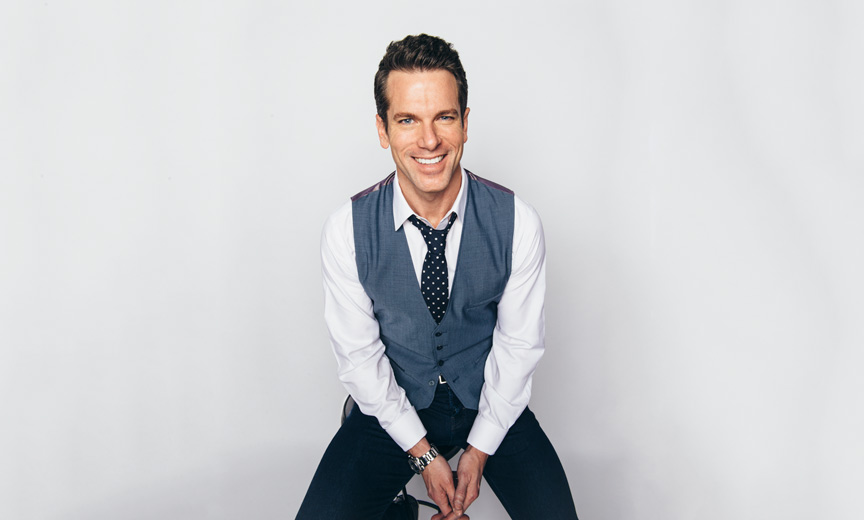 The newsman talks with Metrosource about climbing the media ladder, leading a professional life in the public eye, and whether coming out has anything to do with it.

I’m behind the scenes at MSNBC’s studios to observe today’s taping of MSNBC Live with Thomas Roberts. Overheard so far: crew banter, a handful of buzz-worthy keywords about video packages, muffled exchanges between the anchor and his correspondents. On the plus side, I do have an unrestricted view of the back of Roberts’ well-groomed head. Moments later, I’m handed an earbud in order to better eavesdrop on the chat Roberts is about to have with Star Trek alumnus and gay icon George Takei. As the original Mr. Sulu ambles into the studio, Roberts digs into a small off-camera bag and quickly dabs his brow.

Thomas Roberts has been a serious newsman for 22 years, with multiple awards and an Emmy nomination to his credit. More than a decade ago, he made his own headlines when he announced publicly that he is gay. To offer a sense of perspective, Anderson Cooper waited another half-decade to publicly confirm his own sexual orientation.

Back from commercial, Roberts greets Takei and asks matter-of-factly whether the actor has any problem with GOP candidate Donald Trump suggesting that Muslims ought to be singled out for scrutiny if America is to win the war on terror. Takei smiles broadly and says that it’s all quite reminiscent of his being raised in an internment camp for Japanese-Americans during World War II. Their exchanges are breezy and warm. Roberts mentions that Takei is on now on Broadway — eight performances a week — in a show inspired by his upbringing called Allegiance and thanks him for his time. Even when the topic is incendiary, Roberts keeps the dialogue as easy as a visit to the watercooler.

Once the show wraps, Roberts shakes my hand while nodding over his shoulder in Takei’s direction. “He’s great, isn’t he?” says Roberts. “Did you get to meet him?” Tall and fit as a retired ball player, Roberts towers over nearly everyone in the room, Takei in particular. As we make our way through the labyrinth of the legendary NBC studios at 30 Rock, the anchor greets several staff members and introduces me to them without breaking stride. In no time, we’re outside his surprisingly diminutive office, where a clothes rack is scattered with pieces either recently worn or about to be. “Please excuse the mess,” he says. “It’s like a college dorm room in here.”

Roberts has only just returned to New York City after spending a week in San Bernardino covering the shootings there and the week before in Paris reporting on the terror attacks. So it’s not hard to see why he hasn’t had an opportunity to tidy up. I ask if there’s ever such a thing as a “typical day” for him, and when he pauses, he might be thinking or simply taking a moment to catch his breath.

“I try to have habits, to be productive every single day,” he begins. “It doesn’t always work out.” Roberts tells me that he learned long ago to “expect the unexpected” because so much of his life is dictated by events around the globe, whether he’s in the studio or on the road. At the start of any day, he knows, “Today could be off-the-charts wild.”

“I would typically say that it’s a safe bet that I’ll be here at 30 Rock unless the story demands that we go on the road for better reporting. San Bernardino … while that was grueling, we were able to move the needle with how that story was developing to understand who these people were, how they could commit such a heinous crime, [examine] the reaction of families that were involved and affected by such loss.”

Does such tragedy become commonplace? “You never get used to it, and you don’t become hardened to it where you lose compassion for folks who are living through this,” Roberts insists. “Unfortunately, we’re seeing it all too much.”

Whereas the average person will likely — at least occasionally — want to turn away from the ever-unfolding developments of our sometimes savage world, Roberts believes it’s his place, perhaps his responsibility, to help find answers and bring order to the chaos around him.

“I love storytelling,” he explains, “and I’m lucky because I don’t know anything else. [In] this the profession I’ve gone after, it’s hard to consider your personal and professional life as mutually exclusive — as hard as you try. So I self-identify with my job a lot.”

Roberts caught the media bug early. He can recall laying on the floor watching World News Tonight because his father’s Canadian mom “had a thing for Peter Jennings.” Roberts remembers, “My mother said, ‘That could be you someday.’”

With a degree in communications from Western Maryland College (which is now McDaniel College), Roberts accepted what he describes as a “one-man band” job at a small station in Westminster, MD. “I had a foot in the door,” recalls Roberts, laughing at the memory. “I was able to parlay that into a horrible job making $16,000 a year.”

Perseverance eventually led to Roberts landing a job at CNN in 2001, where he received an Emmy nod and anchored Headline News in Atlanta before he relocated to Washington, D.C. in 2007. By then, he was a well-known face and — because he had recently come out in front of an audience of the National Lesbian and Gay Journalists Association — he was also one of very few public gay faces on the national news stage. 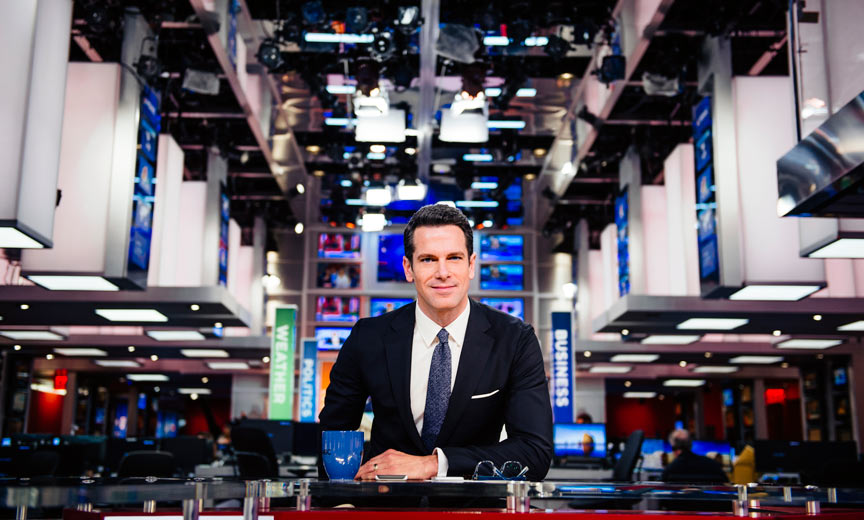 THE PURGE OF TRUTH

“It was an interesting time,” Roberts recalls. “It was like the ‘purge of truth,’ trying to unburden myself — at a very difficult time in my life — of all things that I thought were weights around my neck that were holding me back.” He recalls that coming out was” like opening a fire hydrant and you really don’t quite have the hose on it just yet.”

So what made him take the leap? “I thought: it’s time,” he remembers. “This shouldn’t be a big deal, and if everybody at work knows, why can’t everybody at home that watches know?”

Nevertheless, admits Roberts, “It wasn’t something that was overly encouraged from all aspects of my life — whether it was from my agent, my now-husband, my then-bosses. There weren’t a lot of folks who thought this was a great idea.”

Did anyone think it was a great idea? “I did,” Robert says, confidently. “I thought it was a great idea. I also wanted to do it for other journalists who were coming up in this industry.” Roberts says that he wanted others to be able to have “a successful personal life and a successful professional life. Because, for me, I always thought: I can’t have it all. I can’t have a successful personal life and have this job. There is nobody like that. So I had to carve my own path.”

That path hasn’t always been smoothly paved. Being known as “the gay anchor” long before Anderson Cooper was on the record or Rachel Maddow was a household name, Roberts strived to keep the world focused on his work rather than his orientation, even when he got little cooperation in doing so. Being gay and on national television, he says, “That’s your first descriptor, so that leads everything. It’s not that you’ve been doing this for 22 years or that you’ve recently done this or done that. I mean, you get the three letters: G-A-Y, and that’s your biggest accomplishment in life.”

“I think [it] is fine to help define me,” Roberts elaborates. “It’s not the greatest thing I offer, but it is one of the many great things that’s in the mix of what I have to offer.”

However, as for regrets, Roberts has none. “For me,” he muses, “Life has always been about timing. Sometimes mine has been great, other times it’s really stunk. Most people can relate to that.”

BRINGING HIS OWN LENS

In both his on-air time and public appearances, Roberts projects the aura of a consummate professional. “I’ve never considered myself to be a point-of-view personality as a journalist,” he says. “Working here, I’ve always tried to remain within my boundaries. I know, because of my own experiences, that I view life a certain way. I bring my own lens. As journalists, it’s our duty to ask questions and look at things from all angles.”

That mindset has earned the respect of peers and those who might take issue with Roberts’ commitment to being open and visible as a gay man. According to fellow NBC newsman Willie Geist, who has been Roberts’ colleague since the CNN days, “I remember thinking, ‘Man, that guy can do it all. He can be at the anchor desk covering breaking news one day, and then out in the field reporting on that same story the next. Thomas is the total package.”

Where many anchors might give an adversarial guest less than a warm welcome, Roberts sees them simply as “working at their job. And sometimes their job is directed either religiously or through social policy. I’m doing my job, and my job is just to be a journalist.”

What about when Roberts goes toe-to-toe with people like Family Research Council mouthpiece Tony Perkins, who has consistently sought to keep gays disenfranchised? “I’d rather see people through the prism of professional than through the prism of personal,” Roberts maintains. “It’s never come up on the air and been used to demean me or try to undercut me. I’ve never allowed it to play out that way. I never will, because I don’t think there’s a way for it to be used against me to demean or undercut me doing my job.”

For the time being, it seems Roberts does have it all — a husband of three years and and a career that keeps him busy and almost constantly in the public eye. He tells me that he wouldn’t change a thing.

“This job continues to be the great adventure of the unknown,” Roberts says. “You’ve just got to follow the story wherever it takes you, whatever that story may be. I think I’m still pretty young and have a long road ahead of me. As long as my badge keeps working downstairs and those little turnstile teeth open up, I’m a happy guy.”