A Hawaiian Feast of Must-See Destinations 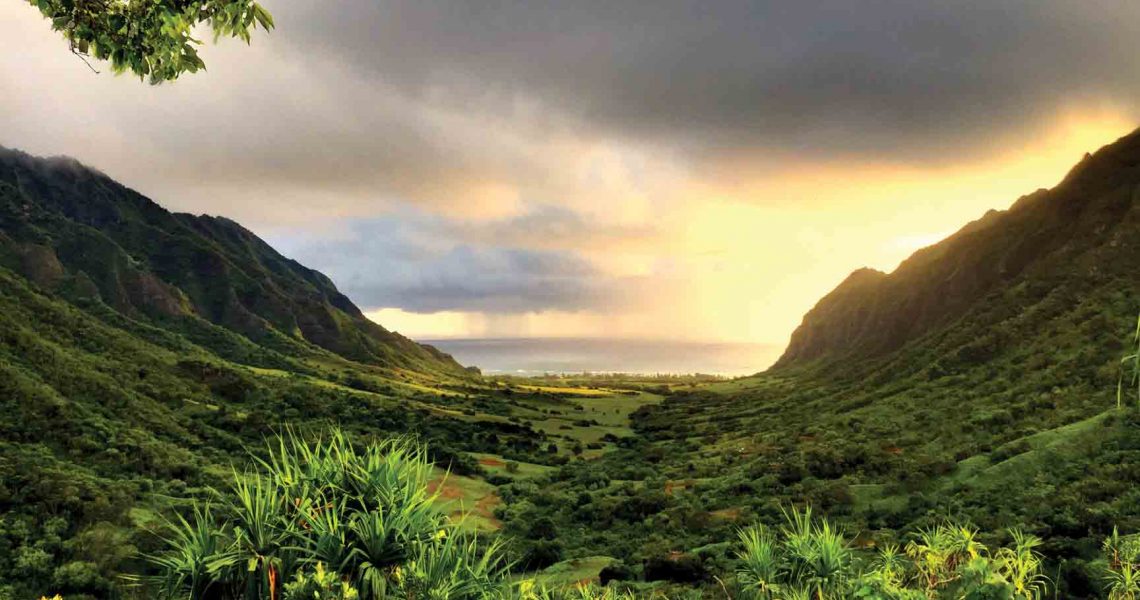 Eight spots in the islands that exemplify good design, from historic architecture to majestic natural beauty.

“Design” may often be used to refer to a destination’s Architecture and décor, but the term can refer just as well to anything that catches the eye — sometimes even the unspoiled plans of Mother Nature. The Hawaiian Islands certainly provide an array of jaw-dropping natural designs, but they also host visually stunning structures sprinkled from one island to the next. Here are eight places worth seeking out — or at least taking a moment to appreciate before you continue on your way.

Kualoa Ranch is known as Hollywood’s “Hawaii Backlot” as it has been featured in many big and small screen projects over the past 50 years. Its lush terrain has been used as the backdrop for such films as Jurassic Park, Jurassic World, Pearl Harbor, Godzilla, Tears of the Sun and 50 First Dates. Meanwhile, television shows including Lost, Mangum P.I., and both the old and new versions of Hawaii Five-O shot here as well. The stunning landscapes of the ranch appear much as they would in their natural state, making the ranch ideal for Hollywood designers who search for settings that seem untouched by human hands. kualoa.com The Wailuku Civic Center Historic District is primarily comprised of historic buildings that serve as government offices. Built over a span of 30 years (1901-1931), they incorporate a variety of architectural styles, but the courthouse (pictured above) is the most impressive — exemplifying the neoclassical grandeur of Beaux-Arts architecture (though it is, technically, no longer a courthouse). historichawaii.org

6. The Alexander and Baldwin Building (Oahu) The Alexander and Baldwin Building (pictured above) was considered by many to be Honolulu’s finest structure when it was completed in 1929. Construction of the heralded Hawaiian business headquarters required specialty materials supplied from as far off as Europe, and artisans from the U.S. mainland were brought out specifically to work on creating some of its distinctive decorative features. It remains one of the most distinctive and attractive buildings in Hawaii. alexanderbaldwin.com Once the main entertainment attraction in picturesque Wailuku, the theater (pictured above) was built in Spanish Mission style and opened in 1928. In addition to movies, the theater also featured live stage acts; so such stars as Bob Hope, Frank Sinatra, Mickey Rooney and Donald O’Connor all made appearances at the Iao. It was nearly demolished in 1994, but was saved after being placed on Hawaii’s Register of Historic Places. mauionstage.com

POW! WOW! is an epic event that takes place in the Kaka’ako district of Honolulu over the course of Chinese New Year and the weekend of Valentine’s Day. A global network of international and local artists join to take blank walls and panels and transform them into works of singular beauty with bold artistic expression. Although the idea began here, it’s since been introduced around the world. powwowhawaii.com Built in 1937 as the Honolulu home of American heiress and philanthropist Doris Duke, Shangri La (pictured above) was a creation that was inspired by Duke’s extensive travels throughout North Africa, the Middle East and South Asia. As such, its design reflects architectural traditions from countries including India, Iran, Morocco and Syria. Shangri La is now a center for Islamic art and culture. Though it offers tours of the property, the center also offers residencies for scholars and artists in addition to programs that aim to broaden overall understanding of the Islamic world. The Shangri La’s décor is not only grand, but also far removed from that of any other structure found on the islands. shangrilahawaii.org Another one of nature’s most magnificent designs, Hawaii Volcanoes National Park (pictured above) serves as monument to Earth’s fiery origins. Its active volcanoes remind us that the very bedrock of our planet continues to shift below us. Like evolution itself, nothing can be done to stop a volcanic eruption; we’re left standing in awe before its power. Watching liquid rock gush from the planet’s core is unforgettable and reminds us that we are not always as in charge of this Earth that we’re sharing as we’d like to think. The park is home to two active volcanoes: Kilauea, one of the world’s most active, and Mauna Loa, the world’s most massive volcano (not located underwater or underground). nps.gov/havo/ An elegant representation of the influence of Japanese culture and religion on the history of Hawaii, the Maui Jinsha Mission temple (pictured above) is also a superb example of the Shinto style of Japanese temple architecture. Sprawling over an expansive lot with open lawns, the temple is one of the few remaining Shinto shrines in the state and the only major such shrine to be found on the island of Maui. However, the structure is in dire need of restoration as time and the elements have wrought significant deterioration. Learn how you can visit the Mission and help preserve it for future generations at historichawaii.org.

Consider a visit to some of Metrosource’s favorite Hawaiian accommodations, located in always-welcoming Waikiki.

Hotel Renew has 72 beautiful guest rooms and the feel of a “modern beachside boutique.” The property is also dog-friendly; so inquire about special rooms, where a pair of your furry friends can join your adventure. hotelrenew.com

Vive Hotel Waikiki offers a variety of amenities along with its 125 lovely rooms, including free continental breakfast and gear you can borrow to be well-prepared for enjoying nearby beaches and other outdoor activities. vivehotelwaikiki.com
(—B. Crawford)

Hawaii: Choose Your Island and Your Adventure
Mo’orea Means More of What You Love about Hawaii

Taking the Gay out of Gaycation, Ellen & Ian Visit Orlando

Viceland TV has a scintillating series on its hands with Gaycation, starring Ellen Page and her pal Ian Daniel, who travel the world to experience gay life in far-flung...

Forget the Fall Foliage, Now's the Time for Napa

If you’re thinking of avoiding the summer heat and planning your vacation for fall, do I have a recommendation for you: No, it’s not the New Jersey Turnpike or Norman...