A PARTY WITH PRECAUTIONS 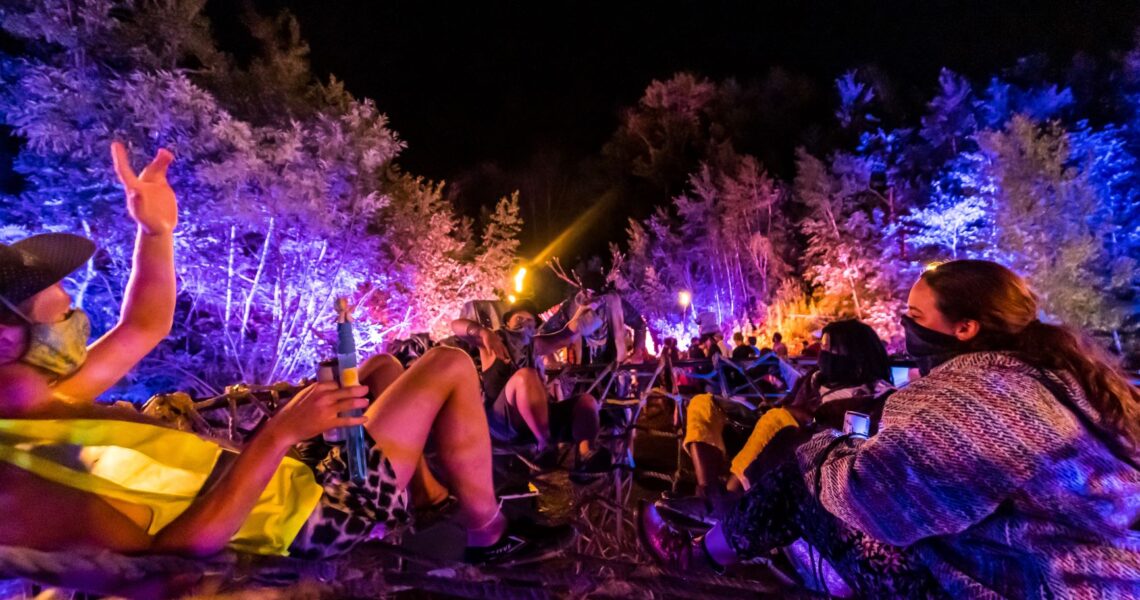 Anticipation reaches fever pitch in the check-in line. The queues are long. Tickets must be verified. Cars get combed by security guards. It is a whole process. Only after the ceremonial thumbs up is offered may a festival goer enter the grounds and officially kickstart their fun-filled weekend.

At a retreat called In My Elements, nerves emerge for different reasons. When we roll up to the front gate in our rental car, licensed medical professionals are waiting with long cotton swabs in hand. Though we were tested in Manhattan for active COVID-19 with a PCR test just three days prior, there is still a lingering uncertainty surrounding the potential outcome of today’s result. Worse case scenarios flutter through our minds…

“What if we contracted the virus on the subway ride home?”

“Could we have come in contact at the grocery store where we bought our supplies?” 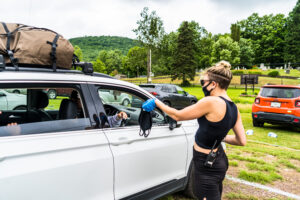 “Is it possible we’re asymptomatic carriers?”

After a three-hour drive, we are willing to take our chances. A positive test result means we must head home immediately to quarantine for at least 14 days. A negative result, on the other hand, is our ticket to see internationally renowned electronic artists like Maceo Plex and DJ Tennis perform at one of the season’s only festival-style events. Producers of this caliber are used to playing the world’s most lavish venues before thousands of fans – this time they will be spinning for less than 200 at a summer camp in Northeast Pennsylvania. It is a rare and hot prospect.

After waiting 20 minutes in a socially distanced parking spot, a staffer emerges with two tiny slips of paper. Underneath our names in capital letters are the words “SARS NEGATIVE”. “You’re good to go,” he says with a smile before pointing us toward a modest cabin where we will be lodging for the next three nights. 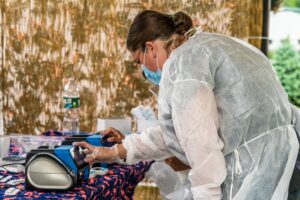 “It started with a question: under what conditions can we create a safe, limited-size gathering?” says Brett Herman, Co-Founder of BangOn!NYC, the production company responsible for this weekend’s event (which is significantly different from the massive warehouse bashes they’re famous for throwing in Brooklyn, NY). “That launched into research on testing, how COVID-19 spreads and business guidelines. We started with that framework and explored under what conditions we could make something happen.”

This thoughtful approach led Herman to develop a two-part testing protocol – a cornerstone of the methodology he and a small team use while consulting for events under the company name, Tested Contained Retreats.

All ticket buyers were required to be tested 72 hours prior to the retreat at one of three designated locations in New York City, Boston, and Philadelphia. Those who received positive results were contacted and asked to quarantine. Everyone else was sent an address and told to arrive on-site that Friday during approved hours where they’d be expected to take a second rapid test (Sofia 2 SARS Antigen FIA with 96.7% PPA and 100% NPA sensitivity, manufactured by Quidel) before joining the party.

“As long as COVID remains a factor, and there is no vaccine, then testing has to be a part of the conversation around live events,” Herman says. “We hope the whole process can be scalable for larger crowd sizes and that better and faster technology will come out in the interim.” In the meantime, a series of mitigation procedures aim to fill the gaps at this experimental, open-air retreat, which also features daily yoga classes and educational workshops on topics such as “Ecology in the Age of COVID-19”.

Buying a ticket comes with some commitments. Keeping a contact tracing journal prior to arrival is highly recommended, and guests must attest that they will not be in contact with anyone considered high-risk for 14 days following the event.

After they are screened and admitted to the retreat, attendees are expected to wear masks when coming within six feet of someone else (and if they forget, there is plenty of signage with reminders posted). Free face coverings are provided alongside an arts and crafts table that is stocked with glitter, puff paint and other charms for bedazzling.

Capacity is set at 250 people, including staff and artists, which is a fraction of what BangOn!NYC typically sets for their flagship event, Elements Arts and Music Festival. It typically brings more than 5,000 music lovers together over Memorial Day Weekend each year, however the 2020 event has been officially postponed until 2021. 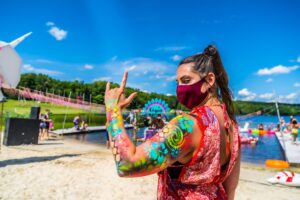 Consent is another key focal point of a mandatory orientation that takes place early Saturday morning. “Always ask before approaching a new friend” – It is a welcome suggestion that all festivals could stand to push, in these pandemic times and otherwise.

Even though new precautions are present, the lakefront camp feels like a little slice of home. Friends reunite after months of solitude, splashing away to bubbly house music and disco sounds by day. At night, the squad migrates to a cozy, forest cove, illuminated by colorful lights and blazing pyrotechnics. Amidst fast-moving techno beats and rumbling bass, ravers reconnect with a feeling that has been universally missed since nightclubs shut down back in March. 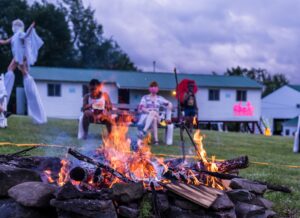 “Everybody [has been] tearfully blissful about how important it is for them to finally get out and dance under open skies,” Herman shares with emotion in his voice. “We are clearly seeing the effects of long-term isolation on mental health, which is a real and legitimate health risk, just as much as this disease. If we aren’t able to provide balance, we will see escalating health costs and problems through rises in depression, substance abuse, and general anxiety, and I think finding a way to gather safely has to be a huge part of [the solution].”

The artists are ecstatic to be back in the saddle too. “Playing at In My Elements in July after a four-month hiatus on in-person gigs was a really surreal experience,” says Brooklyn-based DJ, Ria Bird. “I had been streaming live sets from home from time to time, which had its ups and downs. While it was great to be able to share my sets with people all over the world, I very much missed the energy of playing for a live crowd. So much of what a DJ does [relies on] reading the room and responding to the energy of an audience in real time.” 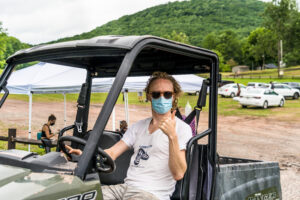 After being approached by BangOn!NYC and Tested Contained Retreats co-founder, Tim Monkiewicz, Bird said she jumped at the opportunity to be involved. “If nothing else I was excited and curious to see how they would pull off a festival during a pandemic,” she adds.

Still, there are critics who argue that the only safe party during a global health crisis is no party. But In My Elements and Tested Contained Retreats are giving cynics a run for their money. Since taking place July 10th – 12th, there have been zero new cases linked to the small-scale celebration, which clocked a final crowd size well under Pennsylvania’s state-mandated limit for outdoor gatherings.

Following the success of their inaugural event, Tested Contained Retreats partnered with Jake Resnicow, the name behind NYC Pride’s hottest parties, to implement similar measures at his Utopia open-air retreat fundraiser which took place over Labor Day Weekend. It’s another way they hope to expand their reach and keep more communities safe.

Plus, BangOn!NYC plans to throw more music events in 2020, further cementing their reputation for offering a handful of this year’s only well-mitigated music events. Their efforts mark the beginning of a new movement that puts health and safety at the forefront of entertainment.

“If being able to go to a concert motivates more people to get people tested, then that is a huge benefit to society,” Herman explains before revealing that two asymptomatic cases were detected during In My Elements’ first round of testing. “We caught two young, healthy cases and were able to keep them home,” he adds. “That’s a huge net win.” 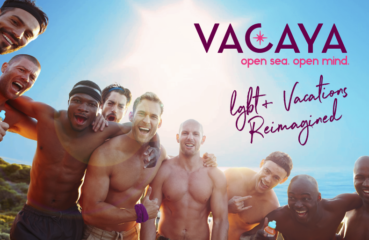 Plan your 2021 LGBTQ Vacation in New Orleans with VACAYA

VACAYA makes history yet again with an exciting and innovative CLOSE-TO-HOME vacation option – an 8-night adventure roundtrip from easy-to-get-to and seductively gay-friendly... 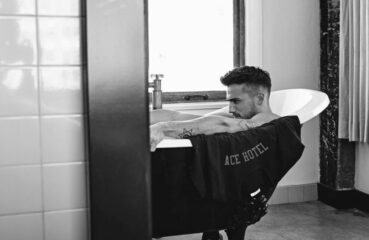 This Queer Crossover Is Gonna Make You Sweat

You can’t spell #SafeSpace without #Ace, as in the fabulously flirty Ace Hotel. This LGBTQ+ haven was founded by gay entrepreneurs, quickly becoming a boutique party enclave...