Laura Raicovich has spent her career at the intersection of art, community, and social justice, so her appointment as Interim Director of the Leslie-Lohman Museum of Art, the nation’s first museum dedicated to queer art, makes perfect sense. She succeeds Gonzalo Casals, who was recently appointed New York City’s Cultural Affairs Commissioner. Raicovich was formerly the president and executive director of the Queens Museum, and for the last 18 months she has been working on a book about museums and cultural institutions and the “myth of neutrality.”

“Gonzalo and I are good friends, and he called me and said, ‘Would you consider this?’ It was right around the time everything got locked down,” says Raicovich. “I was obviously paying a lot of attention to how [the pandemic] was going to affect cultural institutions particularly because that’s my world, and I was already thinking about how we were going to respond to this.” Raicovich says her role as Interim Director is to “steer the organization through a period of transition with some stability, and basically hand it off to the permanent director, at least in as good a place as I received it.” Current world events have made that even more of a challenge than it would normally be.

The Leslie-Lohman Museum of Art was created by Charles Leslie and Fritz Lohman, New Yorkers who held an exhibit of gay artists in their SoHo loft in 1969. The pair continued to collect, and exhibit works throughout the 1970s, and during the AIDS pandemic of the 1980s they began to rescue the work of dying artists whose families were going to destroy it. In 1987, they formed the Leslie-Lohman Gay Art Foundation, and the organization was accredited as a museum in 2016. The museum has a collection of over 30,000 objects and hosts six major exhibitions annually, maintains a research library of over 3,000 volumes, and acts as a cultural hub for the LGBTQAI+ community.

The idea of a cultural hub has been a particular challenge for the museum, as it has been for so many cultural institutions during the pandemic. Says Raicovich, “For a place that’s as community-oriented as Leslie-Lohman, that has functioned as a hub for queer folks from all over the city and even outside of the city, this is a very real challenge. [The Museum] has been very, very essential in that sense, and it needs to continue to be that for folks.” She continues, “The challenge is to go from existing in real space to virtual space, and especially since one of our big focuses is on access, to think about how people will get access who don’t necessarily have broadband, and who aren’t able to do Zoom or the like. Almost everybody has phones now, but not all those phones are the same, nor do they necessarily have the kind of data that is needed.”

Raicovich’s mission is to make sure that the community stays connected. “How do we make sure we’re not cutting people out who are already marginalized? That has been a major focus of thinking through what our programming will be while we’re kind of not able to open our doors.” To that end, she has been reworking the museum’s website, making sure that current exhibitions are all available online, and coming up with creative webinars that can be accessed by the public. As an example, in May the museum launched a webinar about Alt-Text. “I met this really great artist named Shannon Finnegan, who does a lot of disability activist work, and she had been working on an Alt-Text project. Alt-Text is the way that people who have low vision can see the internet. And so, she does these workshops to teach people how to use Alt-Text which most arts organizations don’t even do.” Raicovich worked with Eyebeam, where Finnegan was in residency, to bring the webinar to the public. “We were just going to do it for the staff because I think our website should have rich Alt-Text content but then I thought, why not make this public? So many people are taking this moment to revisit their websites, us included, because they are suddenly essential.”

The Alt-Text Project webinar brought together queer writers and artists, and the video can be viewed on the museum’s website. “Shannon is really amazing, she thinks of Alt-Text as a place for art and poetry, and that what we do there doesn’t have to be so literal. It’s a visual place to begin with because it’s a way to allow people with low vision to be able to ‘see’ the internet.” Raicovich believes that programs like this are going to be important going forward, for all cultural institutions.

“One of the things that this crisis puts in remarkably high relief is the inequities of the society in which we live, and I think there are all kinds of ways that those inequities can be addressed. There can be very subtle ways that we take on those challenges, like fixing Alt-Text. I think the Museum of Contemporary Art in Chicago is one of the few museums that has an Alt-Text policy. I think it should be something that everybody does, just like when museums started digitizing collections. We need to make Alt-Text a standard so that more people can receive the work that we do.”

Raicovich’s philosophy about museums is that they are, or should be, democratic spaces that function as a place not only to view art but to come together as a community. Her work at the Queens Museum included massive and extensive community outreach in one of the most diverse boroughs in New York. Her forthcoming book also examines the biases of cultural institutions both large and small. “What I try to do in my book is to look back at the history of museums and cultural institutions in the United States in order to understand where some of these biases come from.” She continues, “Of course, most museums and cultural institutions in the United States came from the donation of artwork that was owned by very wealthy people. Excellence has come to be defined, in some ways, by certain types of taste. What I’m really interested in is the way that public libraries and museums came out of similar places, started by the wealthiest Americans like Andrew Carnegie, but libraries somehow feel more public and more democratic. Perhaps that’s because they have that word, ‘public’ but I believe there is also something else. I think there’s a lot that museums can potentially learn from libraries.”

Raicovich is charged with shepherding Leslie-Lohman through an especially difficult period in history, and she sees that as part of a larger conversation about how museums like hers should function. “The history of this institution is all about the relationship between what a museum and what culture is for communities that have been marginalized. We are more akin to the Queens Museum than to, say, MoMA, not that there’s anything wrong with MoMA, but it’s a different kind of space, it’s a different kind of cultural experience. What makes New York special is this great diversity that we have with cultural spaces, but what concerns me is the precarity with which so many of our great, great institutions like Leslie-Lohman and the Tenement Museum, for example, function and how we weather the storm.”

Besides protecting the public face of the museum, her role is to also care for the staff, and to that end she continues to work on funding and creative ways to continue programming. “For me, a great priority is centering care for the people who make the museum. Institutions aren’t buildings and at the end of the day, they are not even collections. Those are the assets of the institution in the financial sense, but the people make the institution what it is and without the people you just have storehouses. Yes, the art might be great, but if you don’t have people to open the doors and to clean the bathrooms and to interpret the work, what are we talking about? So, I’ve been really trying to figure out a way to help the Leslie-Lohman Museum during this moment do things a little bit differently. Especially during a pandemic when we have a health system that’s linked to employment, I would like to do everything in my power to ensure that we make all decisions from a place of care about the people who make this an incredibly special place.”

To learn more and to donate to the Leslie-Lohman Museum of Art, visit their website leslielohman.org 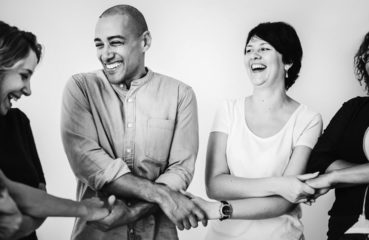 We all need to do our part to end HIV stigma. By Desiree Guerrero When beloved Queer Eye star Jonathan Van Ness revealed (in their bestselling memoir Over the Top: A Raw Journey...