Andre Landeros Michel (pictured below) brought the spirit of ’80s band Scritti Politti with Version II, his Fall 2015 collection, unveiled at the Scandinavia House in February.

Landeros New York was founded in 2013 with a careful blend of goth, punk, new wave, and industrial music genre inspiring and initiation the essentials of design. The progression of dark and gender neutrality with glimmers of the romantic soul was intoxicating at the show, which couldn’t come at a better time during New York Fashion Week. Landeros’s use of delicate silk organza, cashmere, leather, and fur welcomed the massive crowd of spectators back to New York’s underground club scene of the 80’s. The decadent collection alludes to the notion that the future of fashion is a careful yet exaggerated reflection of those late nights in a dark and glittery Manhattan where anything was possible.

A lightweight tank top made from sport mesh featuring full length printed art on the front and a solid black back. The design hangs lower at the back hem, and the neck and arm... 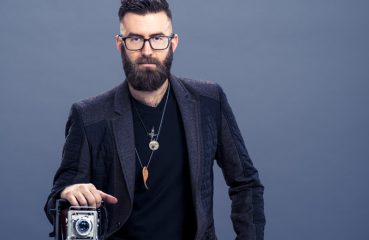 This Is How Eric Schwabel Makes People Want to Get Shot

What’s the biggest lesson photographer Eric Schwabel learned over the course of his varied career? If there’s something he want to see in his subject, he has to make them...