This Is What Happens When You Try to Stop Binge Watching

After realizing that binge-watching television is leaving them exhausted, Wade and Gary attempt to unplug — to mixed results.

“Just one more?” Gary asked expectantly from the other end of the couch. I nodded. He hit play. And another episode of Shameless started.

It was after midnight on a Tuesday. We’d been binge watching the show’s seventh season since 8pm. To our credit, we were also multitasking. Gary was replying to emails on his cell, and I was working on my laptop.

In recent weeks, we had made our way through shows from Crazy Ex-Girlfriend to Unbreakable Kimmy Schmidt. We were doing it with the intensity you’d expect if the events of The Walking Dead (also binge-able) were real. It was as though we had limited time to enjoy Netflix before zombies ate our faces.

The next morning, we overslept and woke up exhausted. “Do you realize it’s been six days since we’ve had sex?” Gary asked sleepily. He struggled to make coffee. “I might as well become a nun.”

“You would look terrible in a habit,” I replied.

“Are we killing ourselves binge watching TV?” I asked.

“Maybe it’s time for a change?” I wondered aloud – like Carrie Bradshaw back when we binge watched Sex & the City. “What if our new indulgence could be taking pleasure in life’s simpler, quieter moments?”

I had a plan. “No TV, no phones, and no work after six.” Gary’s face twitched. “Just think,” I suggested, “with all that extra time, you might get lucky.”

Read Next | Gay Shows: The Best Queer and LGBT Content on Here TV This Week

That first night, as 6pm rolled around, we decided to eat dinner early. After grilling, eating, and cleaning up, we headed to the screened-in porch that we had just added on to our cozy cottage. The idea was that we’d enjoy the fireplace, lovely views of the surrounding woods, and – most of all – the quiet.

“We built this place to spend time together and detox, and we never get to enjoy it like this,” I observed. Gary snuggled up next to me, put his head on my shoulder and exhaled contentedly. I whispered to him, “Ready to get lucky?”

In reply, he snored. He was out cold. I pulled a blanket over us. Soon I was unconscious, too. We woke up some time after midnight, our necks stiff.

On the following night, we were actually done with dinner by 6:30pm. Gary asked whether it now officially qualified as the early bird special. So we vowed that we’d stay up long enough to at least get some reading done. Again we fell asleep.

On our third night, we decided games would help us stay awake past seven. Therefore we played cards for an hour. After I won three times in a row, Gary refused to play. Subsequently, he retreated to the couch and was asleep minutes later.

Night four was a Saturday. I ordered a pizza, got a fire crackling and created a makeshift picnic on the floor of the porch. After we’d eaten and cleared the dishes, I patted the quilt and Gary scooted over next to me. We kissed, and this time – let’s just say – he didn’t fall asleep.

“Our plan worked!” I said to Gary a little while later. “I feel more rested, and we’re spending time with each other, and we even got lucky.” Gary smiled, and for a brief moment we shared the silence. Then I heard a clock chime from inside: six o’clock again.

“I can’t sleep anymore and don’t want to play cards,” said Gary, exasperated. “Don’t hate me, but can we finish watching Shameless?”

I wanted to say no. However, I realized that — if I were being honest — I wanted to finish watching it, too. So, I nodded and turned on the TV. We broke out our smart phones and settled in to finish Shameless.

And then we started Ozark.

But this time — when it started getting late and Gary asked, “Just one more?” – I shook my head: no. Finally, I realized that pleasure was not to be found in unlimited consumption of media or completely denying ourselves. Rather, we needed to find a healthy balance somewhere in the middle.

And I’m sure that we’ll spend many more quiet evenings on our beautiful, screened-in porch again — one day. 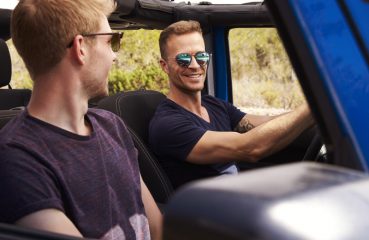 When the world is your office and your spouse is your co-worker, it can be a challenge to finding balance. But it can also lead to some very special moments. Pull Over!... 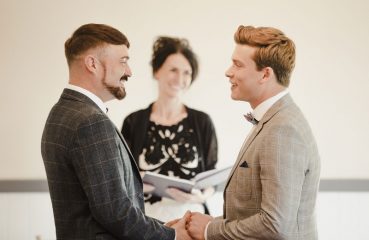 Planning an LGBTQ wedding? We’ve got advice on talking to your officiant, booking a photo booth and what NOT to play. Planning Ahead I Now Pronounce You When a couple asks...