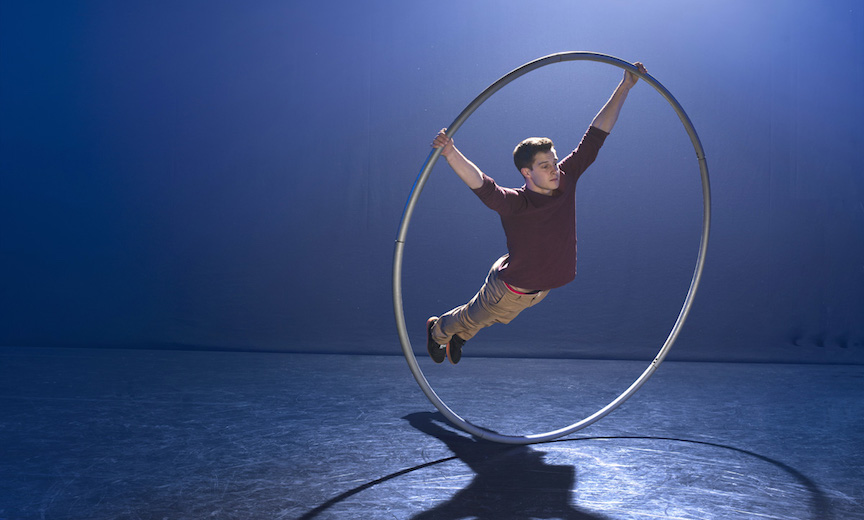 When we caught up with the Brit boys behind Bromance, they were bruised, jet-lagged and more charming than they are nimble. Which is plenty.

Charlie, Arthur, Beren and Louie are friends — straight mates in the parlance of their homeland — who met while training at the National Centre of Circus Arts. Over the years since, they’ve developed not only a style, but a bond as core members of the Barely Methodical Troupe. Their newest effort contains all their signature moves which combine street dance and arial flights of fancy, but lightheartedly celebrates just how close these fellows have become.

Promotional materials for the 80-minutes of nerve and skill revue describe Bromance as “a show with relationships at its heart, where handshakes become handstands and backslaps become backflips. Audacious, touching exhilarating, and with a great soundtrack, this is a tour-de-force of cutting edge physical heroics, wittily exploring male companionship and its limits.”

Here they are in their own words:

Method to Their Madness

There have been a lot of developments lately around contemporary circus arts that allow the medium to relay its own innate message, rather than being used as a story-telling prop or as decorative spectacle, and Bromance gives us a strong example. The acrobatics, hand-to-hand and Cyr wheel specialities of the three performers (Beren D’Amico, Louis Gift, and Charlie Wheeller) reveal their personalities and relationships, both between themselves and their disciplines. And those relationships are the core and beating heart of this show.


Wheeler is the sensitive one, Gift the strong silent one, and D’Amico… Well, D’Amico loves to dance.

The stage is simply set, with three folded wooden chairs against the back curtain, and the large metal hoop of the Cyr wheel marking a circle, spotlit at the centre of the black box space. This show is about the most basic of human experiences but, as we all know, relating to our fellow man can be a complicated business. The requirements of the acrobatic disciplines are the perfect vehicle for revealing the simplest details of status and stakes among the three friends.

From the fictional moment when the trio meet, we are led through a series of ground-based tricking and games that illustrate the getting-to-know-you process and, when the first physical trust is broken, the relationships can begin to move deeper.

D’Amico usually finds himself as the man-in-the-middle; for all the intimate nature of his solid hand-to-hand with Gift, it is he and Wheeller who like to hug. These are platonic relationships, which are, of course, subject to the same jealousies, insecurities and competition as any other. Through the subtle communicative codes of blokes together, we learn who they are.

During the hand-to-hand sequence, D’Amico appears as light as the billowing chalk-dust while he swings, leaps and balances around Gift’s huge frame; he displays a grace we don’t normally associate with masculinity. The weight of Gift’s somersaults resound in contrast. He is a strong and steady base, and I love the moments when his shy clown pops out. An amusing moment where petite D’Amico tries to base Wheeller in a shoulder-stand fails in a very real, yet purposeful, way.

Dance… With Somebody Who Loves You

These friendships between men are rarely mined as artistic source material. We see the difficulties of reaching a friend whose world has gone black, and the love and support the troupe provide is quite beautiful. We see visual gags, and laddish behaviour too. We see Wheeller’s Cyr solo to the evocative music of Stand by Son Lux.

Encountering the wheel, he explores what it can do, what they can do, building another bond that allows them to soar and dance together. He’s very clean, and an excellent performer.

The lads wear matching costumes of maroon t-shirts, black jeans, and, when they bend over, bright red underpants. At first I sigh at the prospect of another one of the stripping sequences that crops up so often in contemporary circus performance, but I can see how this one fits. I suppose it’s a part of male relationships in our culture that girls don’t tend to share; men spend a lot more time with their tops off, and being in underthings alone is much more culturally accepted for them.

As the three figure out ways that they can all work and be together, we see a novel sort of contact dance through linked slings of arms, and a fantastic human springboard that allows a folded Wheeller to launch the other two through the air from his bent thighs.

The triumphant and playful 3-high finale leads to a blackout, and then the lights are brought back up for them to naturally make their way back down, reconnecting with us on the way. 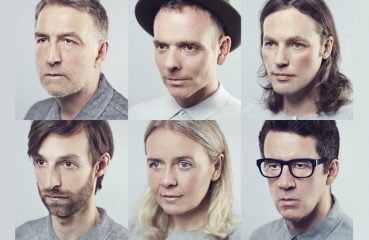 Belle & Sebastian How to Solve Our Human Problems (Matador Records) Gloriously blending the joy and melancholy of everyday life has characterized the legendary Scottish act... 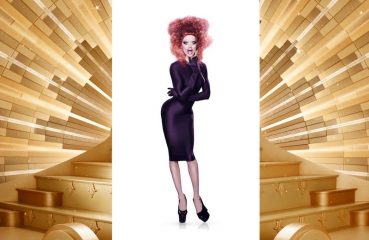 Got Milk? We have exclusive video of the RuPaul’s All Star who seems to be sporting a look somewhere between Where’s Waldo and Big Bird today. Milk, of course, is the...