Lucky Be A Lady – and Sometimes A Bunny. Too

Written by Metrosource Editor| May 2, 2016| Entertainment 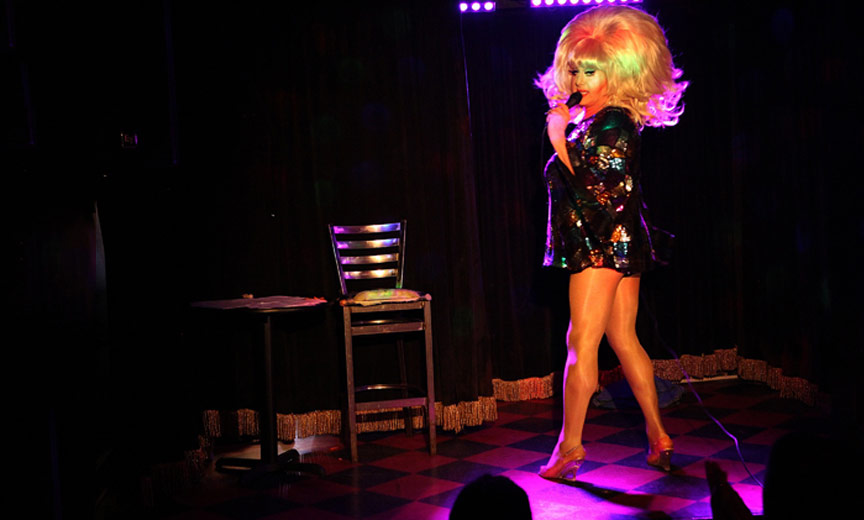 Despite her long nightclub career, Lady Bunny has never delved much into show tunes, but in “Trans-Jester,” running thru May at the iconic Stonewall Inn, Bunny resurrects songs by country star Lynn Anderson, Millie Jackson and even an original tune which pokes fun at the dating life of whatever sex it is you want to call this “Lady.” Then she brings it all home with a finale that features classics from Gypsy and Follies.

A proud slut, Bunny lampoons her own futile attempts to keep up with technology in order to still find the men of her lurid dreams, and the folly of a mature showgirl who looks like she’s been teleported from a ’60s TV set dating the marketable youths of 2016. She explains more . . .

HELENA TROMBONE: How are you liking your new digs at Stonewall Inn?

I absolutely love their new custom banquettes by Bed, Bug And Beyond! Apparently the venerable landmark Stonewall has been doing such a brisk business that they haven’t had time to clean since the riots – in 1969! But the owners want everyone to know that the stale beer, rotten lime and urine smell is actually coming from…me.

It’s a step up from where you used to perform, La Escuelita.

I partied for decades at La Escuelita. Literally since the ’80s. And well into the 2010s, I was one of the very few white queens who regularly joined their weekend show cast. The boys were drop-dead gorgeous and I love any situation in which the strippers and the drag performers (who were often transsexuals there) share a dressing room.

How does “Trans-Jester” compare with your previous one-woman show, “That Ain’t No Lady”?

A lot of it is the same raunchy comedy and song parodies, but what’s really different is that in addition to humor, I try to start a serious discussion on political correctness, which we have taken to ridiculous new heights in recent years. When mainstream comedians like Jerry Seinfeld and Chris Rock refuse to perform at colleges because the kids are such wimpy crybabies, something is very wrong.

We’ve raised a generation of prudes!

We’re so politically correct now that they just made Dick Van Dyke change his name to Penis Van Lesbian. All I can say is that I’m missing the raunchy and beloved Joan Rivers. It’s a rough world out there. We all need a laugh. Even if it crosses the boundaries of good taste, which has never been my forte.

Were you flattered by Adele’s shout out in Vogue Magazine?

Of course! She’s one of the biggest singing sensations on Earth, so I’m amazed that she even knows who I am. In fact, I’m flattered when kids on the street see me in drag and say, “Look, Mommy, it’s Adele.” I think Adele’s gorgeous. And I wish I had eyes that big. I wouldn’t mind a little of her voice, either!

So why do you make fun of her in the show?

Why not make fun of everyone–including myself? Do you actually believe that I harbor ill will towards anyone I make a joke about? I don’t.

A year ago, the entire LGBT community was falling all over themselves to be supportive of Caitlyn’s transition. I respect her right to transition into anything she wants, but I just wish she’d transition out of the Republican party, which raises campaign cash (dedicated to) destroying LGBT rights and doesn’t even respect her right to use the bathroom in public. Trans rights are literally in the toilet in some states, and clueless Caitlyn wants to assist in making life harder for her newfound sisters? How on earth does Caitlyn make sense of that in her mind? To most of my trans friends, Caitlyn’s journey makes no sense whatsoever. And Cosmopolitan is naming her Woman Of The Year? She ain’t been a woman for a year!

What did you think of Candis Cayne’s endorsement of Hillary?

If you are suggesting that I Am Cait’s producers urged Candis’s endorsement to calm the furor over Caitlyn’s attempt to work with Ted Cruz with a Hillary endorsement, that may well be the case. Candis is a long-time friend and it has been odd for me to watch as the PR team has claimed that she is dating Caitlyn or having her first kiss. That’s not the Candis I know, so let’s just say that Candis is an accomplished actress!

Are you still performing around New York as a deejay?

I can be found spinning disco classics on Sundays from 6-10PM at The Monster. Come! It’s free!

And convenient! Do you ever leave the West Village these days?

I’m a West Village resident and the area has become very fancy. I’m glad that Stonewall Inn, The Monster and I never got the gentrification memo because we are still bringing to you raw, funky and deliciously old school entertainment!

“Trans-Jester” runs thru May at Stonewall Inn. Tickets are $19.99 plus two-drink minimum and can be purchased online.

Playing he original Frankie Valli in the Broadway smash Jersey Boys, Michael Longoria learned to hit the high notes. Now he’s reaching for the stars with a new album and a...