After a lifetime of saving as if disaster was just around the corner, Wade finally splurges on a dream car and gives his father the ride of his life.

My father had a strict nightly routine when I was growing up: He would get home from work, pop a beer, read the financial section of the paper, curse at the news, and then watch his favorite TV shows.

Among his favorites was the mystery series Hart to Hart. It revolved around a jet-setting couple who always seemed to be stumbling onto murders to solve. My father loved “whodunnits” as he called them, but Hart to Hart also indulged his passion for cars — as the Harts tooled around Southern California in expensive convertibles.

“Now that’s a beautiful car,” my dad would say, his eyes wide with admiration as he downed a beer. “V-8, top down, hair in the wind … “ Then he would sigh and say: “Someday… ”

My father was a Depression-era kid who believed that financial ruin was perpetually imminent; so saving your money (and never spending an unnecessary dime) was the only route to safety. He could have afforded more. He worked hard, made decent money and had invested since he was a young man. Yet we kept on saving — by having only one TV in the house, no air conditioning, no family vacations. For years, my mother begged him to buy a new washer and dryer. Instead, he attempted to patch up ours with duct tape and shoving towels underneath to catch the leaks. As for cars, my father drove a pickup truck so rusted there were holes in the floorboard.

I soon found myself following in his footsteps. During high school and college I handed over my paychecks to Dad to be invested. While other kids were splurging on cars and clothes and travel, I took the bus. Eventually, I bought an old Mercury Cougar, which I drove until it caught fire. Then I bought a used Toyota Corolla.

But something changed for me as I grew older and built a life with Gary. He’d been the opposite of me growing up — indulging whether he could afford it or not. Over the course of our 20-year relationship, I taught him to save more, and he taught me to splurge a little.

“You’ve saved for decades,” Gary said to me when we first contemplated buying the vacation cottage in Michigan that would ultimately become our home, where I’d launch my writing career and the place where we’d change our lives. “You can’t end up like Mr. Potter, counting your pennies and trying to take it to the grave,” he cautioned, referencing the old miser from It’s a Wonderful Life.

“Save your money, but live your money, too,” Gary advised. So we did buy that cottage. We also began to take my parents on the kinds of vacations they always wanted but never would have taken on their own.

After my mother died, I was visiting my father (who was by that point struggling with dementia). I was flipping through the channels and came upon a rerun of Hart to Hart. As a convertible raced down the highway in the opening credits, my father smiled. “I should have bought that car,” Dad said. “And now it’s too late.”

I rushed out of the room to hide my tears.

Later that year, when it came time to trade in our own old car for a newer one, Gary texted me a photo of a red Thunderbird convertible — a 50th anniversary collector’s edition. It was not what the kind of car we had planned to buy nor did it have the kind of price we wanted to pay.

I thought of my dad, my childhood, the Harts.

“Yes,” I texted back without hesitation.

I drove that convertible 10 hours to see my father, and I will never forget his reaction when we wheeled him out to see it. His eyes grew misty; his cheeks quivered.

We somehow got him into the car and drove him around his hometown — the top down, gunning the engine, his now-wispy hair flapping in the wind, a huge smile on his face. He was finally living in the moment instead of worrying about the future. As I drove home, that happy image of my father filled my mind. It confirmed for me that, though we may often feel short on money, life is also short. Sometimes you just have to go for that top-down convertible and enjoy the ride.

You can learn more about Wade’s writing — including his debut novel The Charm Bracelet, which is now available under the pen name Viola Shipman — at waderouse.com.

Have you ever splurged on a purchase that changed your worldview? share your story in the comments section below. 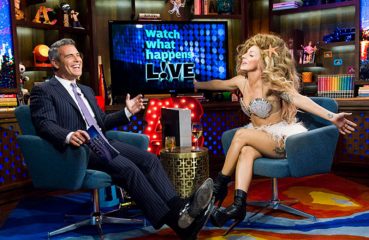 I’m so pleased to feature andy cohen on the cover of this issue of Metrosource as he celebrates the release of his new book Superficial: More Adventures from the Andy Cohen...