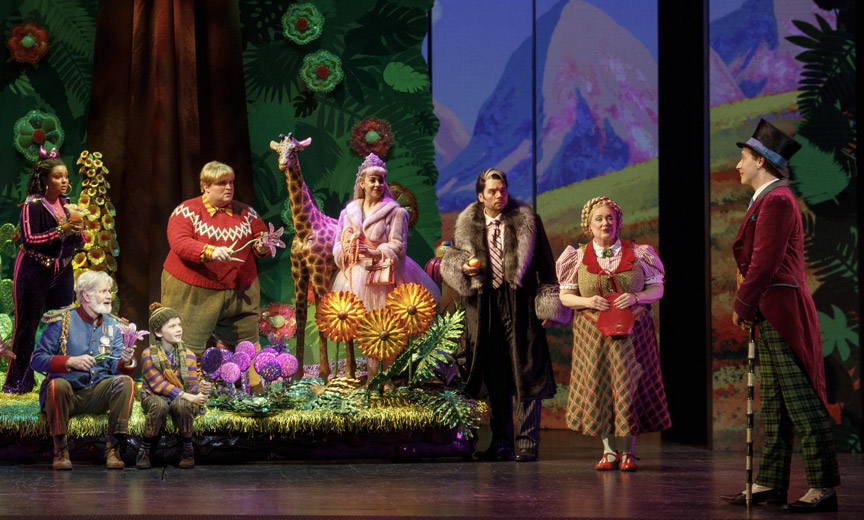 We head to Willy Wonka’s factory to check out the touring company of the Charlie and the Chocolate Factory musical. But is it a golden ticket?

A World of Pure Imagination

I had heard mixed reviews about Charlie and the Chocolate Factory’s short-lived run on Broadway. The idea of seeing the beloved Roald Dahl book adapted for the stage seemed tantalizing and irresistible. However, sometimes what seems good in theory can wind up a tragic misfire. Take Spider-Man: Turn off the Dark, the ill-fated musical with music and lyrics by Bono.

Tim Burton’s 2005 adaptation of Charlie and the Chocolate Factory did well at the box office. But the film had its share of haters, and the original Wonka (Gene Wilder) called Burton’s adaptation an insult. I’m happy to report that the current National Touring production, which opened at the Pantages Theater in late March, offers more pleasure than an everlasting gobstopper.

Theater (like all other artforms) is a subjective medium. Its worth is all in the eye of the beholder. So I’ll say that for me, this magical fable, though imperfect, worked on many levels. And I was pleasantly surprised to find that its book, lyrics and music capture the spirit and magic of the beloved children’s book.

Of Charlie and Willy

Beyond the book, music and lyrics, a musical’s success all about the casting. In this case, it’s particularly true of the two most critical roles – Charlie Bucket and Willy Wonka himself. Eleven-year old Rueby Wood (who shares the role with two other child actors on a rotating basis) performed on opening night and brought just the right mix of innocence and heart to the role. His voice is clear and strong and showed no sign of strain. Tackling these tricky, Wonka-licious lyrics, makes enunciation critica,l and this 11-year-old aced it.

Of equal importance, Noah Weisberg charms as the mercurial and magical Wonka. The role requires a skilled showman who can captivate an audience, deliver stinging zingers, and also pull at your heartstrings. It’s a tall order to which Weisberg rose. I had a brief chat with the talented actor. He expressed his appreciation that three-time Tony Award-winning director Jack O’Brien who encouraged him to find his own Wonka, apart from what others had done before him. Weisberg also commented on the social impact of doing a show like this during these troubled times. “What a great time to go around the country telling a story about little Charlie Bucket who wins the day because he’s honest and selfless and kind.”

In addition to the aforementioned strengths of this production, the supporting cast is excellent. James Young brings a feisty exuberance to the role of Charlie’s Grandpa Joe. Amanda Rose is suitably strong and sweet as Charlie’s mother. Matt Wood brings a gluttonous glee to Augustus Gloop. And Kathy Fitzgerald excels as his mother.

Madeleine Doherty is deliciously funny as Mike Teavee’s booze-loving mom. She seems like she’s stepped out of a 1950s sitcom. The show has been smartly updated with a few adjustments to bring the story to a modern audience. For examples, see Mike Teavee’s obsession with his smartphone and Violet Beauregard’s social media imprint.

But it’s those famous Oompa-Loompas that draw thunderous applause upon their first entrance and keep the energy high throughout successive returns throughout the show. Another highlight is the Squirrel Ballet when Veruca Salt openly defies Wonka’s command to stay away from the squirrels. The gargantuan squirrels are menacing, and Salt’s final moments are ghoulishly hilarious. On that note, the staging of how each miserable child meets their horrible (but deserved) end is clever and played to the hilt. They even manage to show us Violet Beauregard expanding until she quite literally bursts.

It’s not always easy to make a show that’s as entertaining for kids as it is for adults. Charlie and the Chocolate Factory does just that.

Charlie and the Chocolat Factory plays the Pantages until April 14. Then, it’s slated for stops in San Francisco, San Diego, Costa Mesa and 22 other cities. The full schedule and ticket information are available online.

If you’re a fan of musical theater, read about the time Broadway’s Evan Hansen was dating the Touring Evan Hansen. 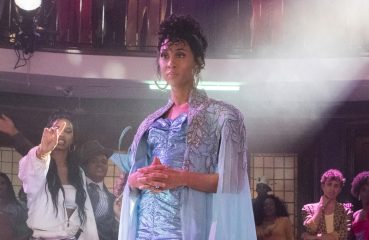 “Pose” Returns for Season 2 June 9: AIDS and “Vogue” to Set the Scene

Pose returns to television June 9 for a second season. When it does, the focus will expand to include the AIDS crisis and the launch of Madonna’s “Vogue.” Few... 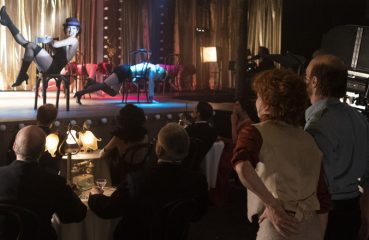 The Fosse/Verdon premiere featured epic lines (“Can she act?”), stellar dancing, and an introduction to the dark, smoky, well-choreographed world of greats Bob Fosse...