What’s more fabulous than a hall full of designer dining rooms? The fact that every chair is a step in the right direction.

By Scott A. Kramer Since early in the epidemic, the design community has sought ways to make a difference. DIFFA (Design Industries Foundation Fighting AIDS) has been an important part of that; the organization was founded in April of 1984 and has since hosted events across the country — including the debut of a new LA-focused event last year. HIV direct care agencies, prevention programs and public policy initiatives benefit from DIFFA’s design-centic fundraisers, such as: 
Each year, DIFFA invites local and international designers to transform raw space into a variety of over-the-top dining environments that keep guests buzzing about where they’re eating and drinking more than what’s on their plates and inside their glasses. Last year’s event hosted 2,000 people and raised nearly $800,000; 2017 will mark its 20th anniversary. 
Picnic by Design NYC has been DIFFA’s end of summer celebration since 2012— offering guests the opportunity to savor “picnic fare” (provided by the best restaurants) while browsing fanciful picnic tables and baskets crafted by generous designers, manufacturers and artists, which are then auctioned. November 2016 also saw the launch of Picnic by Design LA at the WestEdge outdoor lounge — against the beautiful backdrop of Santa Monica. 
“An Evening of Giving” is the appropriate alternate title to this annual fall cocktail reception, which introduce DIFFA’s newest grantees and thanks its supporters for helping to make a difference in the lives of individuals living HIV/AIDS all year long. Just how much giving is going on? It turns out that DIFFA has granted more than $41 million to support non-profits address HIV/AIDS. They focus on seeking out new and innovative agencies across the country, while also making sure to support effective existing programs. And they look good doing it! diffa.org Seminal modern dance figure Merce Cunningham will receive a major retrospective at both the Museum of Contemporary Art Chicago and Minneapolis’ Walker Art Center starting this... 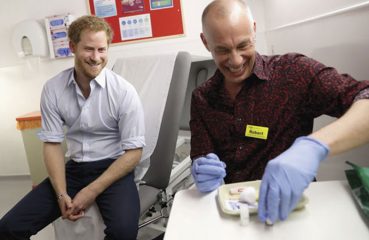 How does a beloved cultural figure get the word out about how vital it is to get tested? The importance of getting tested for HIV cannot be stressed enough; so England’s Prince...