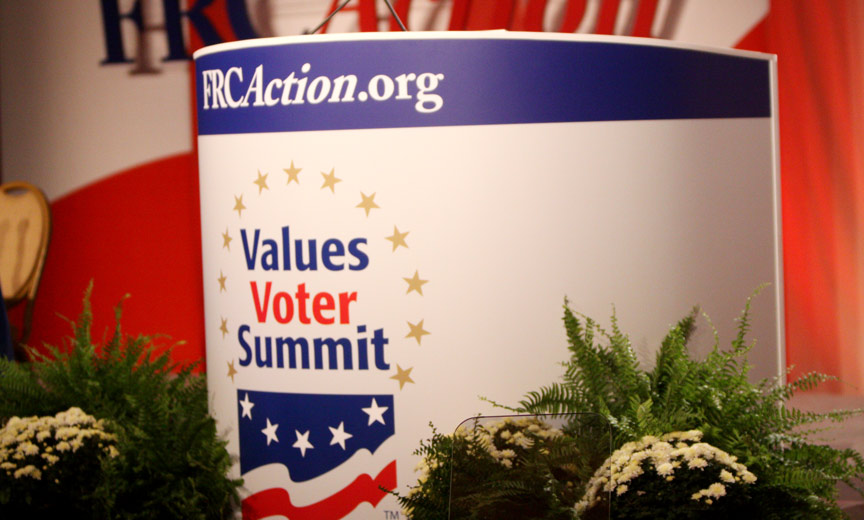 In a presidency that has already given us the decision to ban trans people from military service, Donald Trump will once again insult the LGBTQ community by now becoming the first sitting president to address the Values Voter Summit, a gathering of conservative (read: far right) activists and elected officials.

Haven’t heard of the Values Voter Summit? You’ve probably heard of CPAC, the “Conservative Political Action Conference”, which is generally thought of as the ultimate place for people to proudly tout their far right opinions. Well, in 2011 CPAC dared to invite gay Republicans (the group GOProud) to their conference. This angered the folks at the Values Voters Summit so much that they pledged to make their event a rival to CPAC — one that would be even less LGBTQ-friendly.

There seems to be some confusion in the media about about why the organizers of the Values Voter Summit have been labelled a “hate group.” But check out some of the opinions touted by the people speaking at the summit: Tony Perkins of the Family Research Council has claimed (falsely) that gay men are more likely to molest children. Jerry Boykin (also of the FRC) has threatened violence against people who did not use the bathroom of the gender on their birth certificates. Mat Stever of the Liberty Council has advocated disobeying the Supreme Court’s decision on gay marriage. Former Alabama Supreme Court Justice Roy Moore has stated that same-sex parents are detrimental to children. And Gary Bauer, Founder of “American Values and the Campaign for Working Families” PAC has stated (falsely) that homosexual conduct is three times more deadly than smoking. Hateful enough for you yet? This is a tiny sampling of the anti-LGBTQ positions that will be advocated at this conference.

Some may say that Trump speaking at this conference doesn’t necessarily mean he espouses all the values of the other speakers or of the organization as a whole, but the simple truth is that showing up in a room where this kind of hate is being applauded legitimizes those positions. It is disgraceful that a person tasked with overseeing a government supposedly representing a population that includes LGBTQ Americans is lending credence to people who spread lies about us and actively work against our rights.

What do you think about Trump speaking at the Values Voter Summit?

Metrosource offers advertising opportunities for both National advertisers and local businesses in the New York and Los Angeles Metropolitan areas. Learn more about our integrated...

Reclaiming My Pride — Meet the Judges

About the Judges For Metrosource’s Reclaiming My Pride Contest we sought out judges that are community leaders, along with having a passion for art to judge our finalists. The...