Written by Colin Drucker and Johnny Atorino| May 24, 2018| Entertainment, Screen 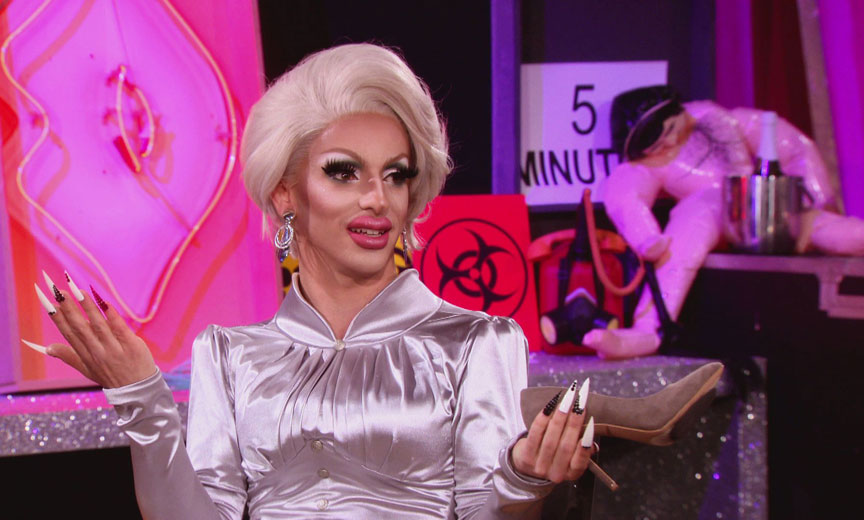 For most of the season, New York comedy queen Miz Cracker has been landing in the middle of the pack. While she’s gotten praise for her quirky Dr. Dill in “The Bossy Rossy Show,” the judges were underwhelmed with both her Dorothy Parker in Snatch Game and her turn as Julie the cruising director in this week’s “Breastworld” acting challenge. Even when she was just being herself in the DragCon Panel Extravaganza, the judges still weren’t laughing. The only thing they have consistently liked is her runways, but that hasn’t been enough to land her a win yet.

Cracker admits to Monet X Change during Untucked that the damage has been done: she came here to show what she could do as a comedy queen and she’s repeatedly missed the mark. She’s clearly thinking very deeply about how to give the judges what they’re looking for, but (as RuPaul suggests during his workroom visit) that may be part of her problem. Her arsenal of clever comebacks is coming off canned; as with so many queens, it’s a lack of vulnerability and willingness to be present in the moment that’s blocking her.

Vulnerability is a recurring theme on Drag Race, and it’s at the heart of RuPaul’s advice to the queens for this week’s acting challenge: to bring the essence of who they are to their roles, fearlessly. This is especially important for Kameron Michaels, who only really shows who she is in her performances and runway looks. RuPaul encourages her to be more “gregarious” this week, but as we see in the workroom and during Untucked, Kameron’s fear of joy in this competition is as strong as her fear of failure.

This theme of vulnerability could also apply to Monet X Change – at least when it comes to her willingness to change up her looks. Her attachment to her kitten wigs might be a minor plot point (and she has changed up her hair a few times, to be fair), but in this pressure cooker of a competition, it’s always interesting to see what the queens grow attached to or stubborn about. The most common sticking point is a queen’s aesthetic, whether it’s Milk on Season Six, Max on Season Seven or Derrick Barry on Season Eight. (And not for nothing, but as soon as each of those queens made a change at the judges’ request, they went home.) At this point in the competition, minor missteps on the runway like wig choices have been the only thing preventing Monet from winning a challenge.

The script for this week’s challenge, a convoluted satire of Westworld, isn’t going to win any Emmys, but none of the queens bomb entirely. Monet is charming as Viv, saving a generic sassy best friend role with the kind of adlibbing RuPaul loves. Kameron is relatively one note, whimpering through the thankless role of the reactionary Muffy and only half-delivering the feels in the climactic monologue. Aquaria steals the show as relatable robot Dyslexia, but Eureka powers down as Bingo bot Rosie. Asia nails an already scene-stealing role as uptight politico Parah Salin, but Miz Cracker is once again just a little too dry for the judges as Julie.

The Future is Now

A robotic runway might have made more sense this week, but instead of futuristic, this week’s theme is just the future—50 years from now, to be exact. Aquaria and Miz Cracker bring different interpretations of neurotic New Yorker nuance, Monet and Asia give house shoes their moment on the runway, Kameron shows off her prosthetic aesthetic and Eureka finds an opportunity to wear a coat she really loves. Monet could have won this week if she wore a full wig instead of three scraps of hair; if Cracker’s performance was stronger in the challenge, perhaps her mature age Miranda Priestley might have helped her finally land a win. Both queens are once again safe this week. Asia edges out a second win against an equally deserving Aquaria, and Kameron and Eureka are left to duke it out in the lip sync.

We mentioned last week that almost every season has had either an eliminated queen return to the competition or both queens survive a lip sync. At first, it seems like Kameron is going to wipe the stage with Eureka; she summons her inner Patti Labelle and embodies “New Attitude” with humor, passion and choreography that was downright aerobic at points. Eureka takes off once she takes that coat off; there’s no denying the excitement of seeing her execute the same choreography that took her out of the competition in Season Nine. By the time both queens drop into a simultaneous split, it’s clear why Ru would give them both another chance. Kameron may have technically won this one by a gray hair, but Eureka doing splits on stage again is a win on its own.

It says a lot about the caliber of Season 10 that the two queens on the bubble right now are Monet X Change and Miz Cracker. Next week’s makeover challenge is anybody’s to win or lose, but – considering Kameron’s track record on the runway and the beginnings of a redemption storyline this episode – it could end up being her second win, which would tie her up with frontrunners Asia, Aquaria and Eureka. If Cracker or Monet don’t win, one or both of them will likely be lip syncing. Few queens have survived a third lip sync, but Monet’s advantage over Cracker is an emotional vulnerability that has allowed her to fully embody the song the last two times she was in the bottom. It’s that kind of edge in this competition that could be just enough to make Cracker crumble.

“It’s a call to action.” That’s how filmmaker Max Emerson described his latest project, Hooked. It’s a dramedy, he’ll say. But one with a... 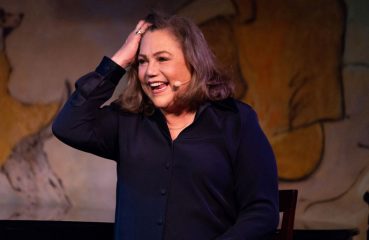 Kathleen Turner offers a night of stories and song that just may be the most moving performance of her career. Many performers begin a performance at the Café Carlyle by noting...