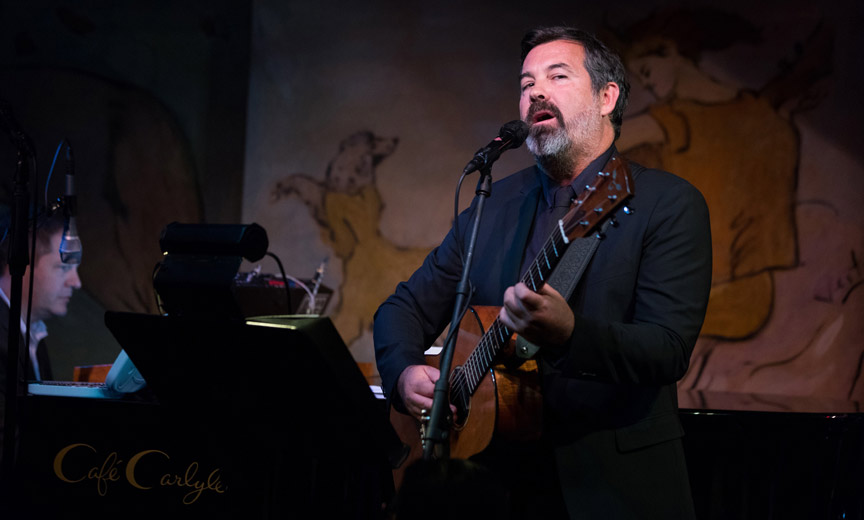 “Keep eating your appetizers; I’ve got to tune my guitar,” Duncan Sheik says as he casually takes the stage at the Cafe Carlyle. He says he’s honored to play the famously luxe venue. “If you saw some of the dressing rooms I’ve had in my career — compared to my suite on the fifth floor — things are looking up,” Sheik says with a wry smile.

However, you will not hear the singer-songwriter (who rocketed to superstardom in 1996 with the mega-hit “Barely Breathing” and subsequently went on to become a latter day king of Broadway as part of the team crafting hits like Spring Awakening) crooning standards just because he’s at the Carlyle. His set, which includes selections from both his solo albums and his stage work — feels very much his style. Sitting at the piano, musician Jason Hart mans an impressive array of instrumentation, including a harmonium and a glockenspiel. Sheik clearly wants what comes out of the speakers to be studio quality sound — and it is.

“I want to say at some point things are going to get a lot more peppy and exciting, but don’t hold your breath,” Sheik says after opening with a series of thoughtful, introspective numbers. But pep would likely be superfluous. Sheik is here to serve his signature brand of thoughtful songcraft — starting with artists who’ve inspired him along the way.

This inspiration portion included a rendition of Depeche Mode’s “Stripped” and a song by Ryuichi Sakamoto from the David Bowie-starring Merry Christmas, Mr. Lawrence. Sheik also more than does justice to “Fake Plastic Trees” by Radiohead. The most important takeaway from Sheik singing other writers’ songs is that his voice — from a manly growl at the low end to a big bold belt to a flawless falsetto — sounds strong as ever and capable of presenting material beyond the scope of what he’s written.

Fans of Sheik’s creations for the stage have plenty to enjoy — including vocals by Kathyn Gallagher (daughter of actor Peter), whose presence is luminescent and whose voice is both boldly unique and yet powerfully pure. Gallagher has been working with Sheik for some time — notably on a Broadway-bound adaptation of Alice in Wonderland called Alice by Heart. Their rendition of “Afternoon” from the show promises great things to come. From Spring Awakening, Gallagher also offers a passionate “Mama Who Bore Me,” and Sheik offers what he calls “sort of” his favorite song from the show, “Left Behind.” Sheik also mentioned that he was reworking American Psycho for a return to the London stage in a couple of years, and if his performance of the show’s “This Is Not an Exit” is any indication, the material’s potential has yet to be fully realized.

“I promised myself I was not going to get remotely political tonight, and I’m not: I’m just gonna play this song,” Sheik says at one point. Nevertheless, he accomplishes much in the way of being outspoken by letting powerful performances of several fine politically-themed songs — including “Lay Down Your Weapons” and “Star Field on Red Lines” — carry their own messages without much in the way of further explanation. But if this material is what Sheik thinks his audiences need to hear, he also knows what they desperately want to hear, and when he rewards their patience with an encore performance of “Barely Breathing,” they answer with passionate applause.

Catch Sheik’s intimate set at the Carlyle through October 7th or keep up with his latest projects on Twitter. 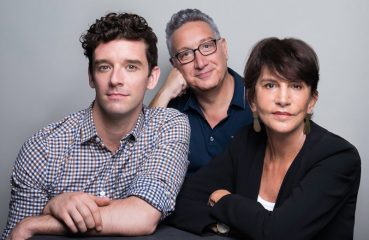 “Torch Song” Brings Fierstein’s Classic Back to the Stage

We talk to Moisés Kaufman, deft examiner of LGBT life through theater, as he brings a landmark play by Harvey Fierstein back to the stage. Emmy and Tony-nominated director and... 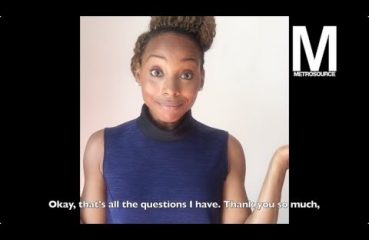 Erica Ash made a splash as soon as she hit New York, where she was cast in an overseas production of The Lion King in 2006, then returned to find herself one of the lead comics in...