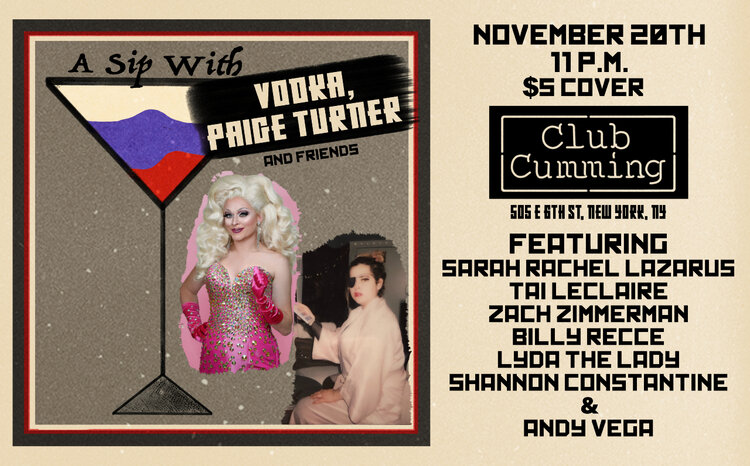 A Sip With Vodka, Paige Turner and Friends is a variety show hosted by drag performer Paige Turner and Natasha Ivonevska Solyanka Split Pea Vodka (played by actress Sarah Lazarus). This epic night will feature the cast and creative team members of “A Sip With Vodka: A Russian Guide To Becoming A Real Housewife And Making It In America., a new digital comedy series. A Sip With Vodka follows the story of a Russian immigrant who moves to NYC with her son in the hopes of becoming a Real Housewife and cabaret star. The team includes comedians Zach Zimmerman, Tai Leclaire, Andy Vega, and Shannon Constantine; Singer/songwriter, Lyda and off-broadway composer, playwright and cabaret performer Billy Recce. Known as the illegitimate love child of Pee-wee Herman and Barbie, Showbiz Spitfire Paige Turner is a staple of nightlife and cabaret throughout New York City. This tawdry blonde bombshell is known for her outlandish mayhem and foolishness and always leaves her audiences wanting more. Sarah Lazarus is an NYC based comedy performer who has performed around the city at Feinstein’s/54 Below, Don’t Tell Mama, The Green Room 42, UCB, and The P.I.T.