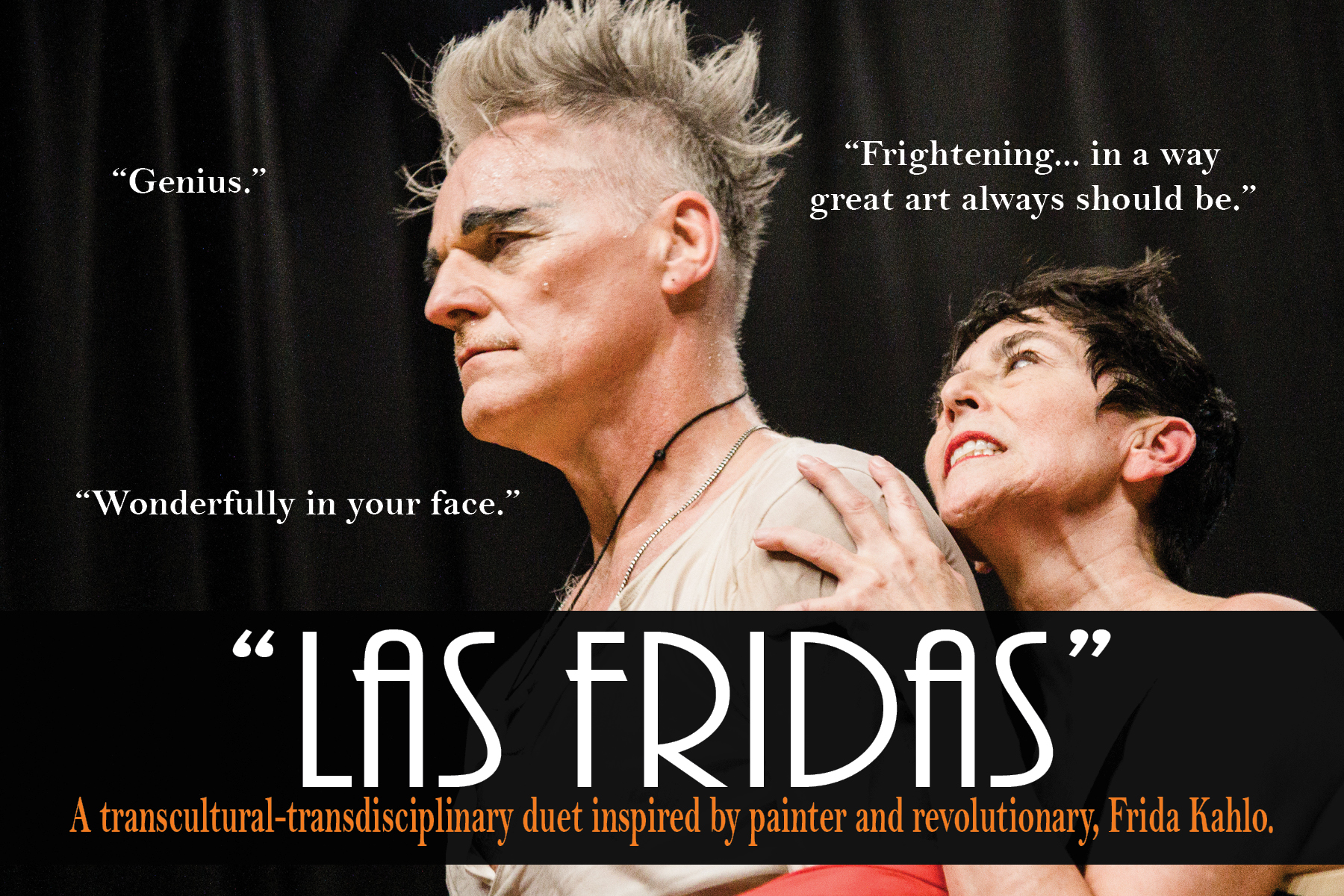 Las Fridas returns for a limited New York engagement in January 2020 after its November 2019 run sold out 5 performances. The 60-minute duet is inspired by the life and work of Mexican painter and revolutionary, Frida Kahlo. This season, the audience has the opportunity to experience the surreal 60-minute work in an intimate setting with limited seating: Mark DeGarmo Dance Studio Theater 310.

November audience members remarked the work is not only “genius” and “brilliant in composition and execution” but “in a way, frightening… the way great art always should be.” The piece is “not scared to push the audience right up to the edge that the performers are living on” and “wonderfully in your face, both literally and metaphorically.”

Artistic associates for over 30 years, Marie Baker-Lee and director/choreographer Mark DeGarmo will perform the dual Dark Frida and Light Frida roles. DeGarmo recalls that “due to the sudden illness of one of the women over age 60 performing one week before the December 2015 NYC previews, I assumed the role, adding gender fluidity, and exploding my previous assumptions… In Fridas’ work there are often two figures, sometimes two Fridas. What if all the different sides of herself, including the masculine and feminine, were made visible?”

The work explores a transcultural, transdisciplinary art, theater, and performance space, while the sum of its two parts suggests a strange new surrealistic view of Frida’s life and traumas. It is inspired by the duality of sun and moon, mother and child, sacred and secular, ancient and current as they appear in Kahlo’s artwork. Las Fridas challenges its audiences to examine their own history, heritage and assumptions about Kahlo, gender, power relations and aging. The implicit question the work proposes is: “What might Frida Kahlo’s life been like had she lived beyond the age of 47?”

In making an offering of this work to the world of the living and the dead, Mark DeGarmo pays homage to his mothers, grandmothers, mentors and friends, including renowned choreographers and dance educators Anna Sokolow and Hanya Holm, educational theorist Maxine Greene, and Living Theatre Co-Founder Judith Malina.

Mark DeGarmo is an award-winning, internationally recognized choreographer, performer, writer, and researcher with a passion for intercultural community-building. Over 30 years, DeGarmo has produced over 100 transcultural-transdisciplinary works and 30 international tours promoting cultural diplomacy and exchange in 12 countries across Latin America, Europe and Russia. The recipient of the 2015 Martha Hill Dance Fund’s Mid-Career Award, he serves as Dance Director of Tlacopac International Artist Residency Mexico City. In June 2017, he was featured as the cover and main article of Dance Teacher Magazine.

His article, “Transdisciplinary Performative Improvisation” will appear in Spanish in the University of Colima, Mexico’s textbook, “Teaching Choreographic Composition from a Transdisciplinary Focus” pending 2019 publication. His love of Mexico for over 30 years led him to create Las Fridas.