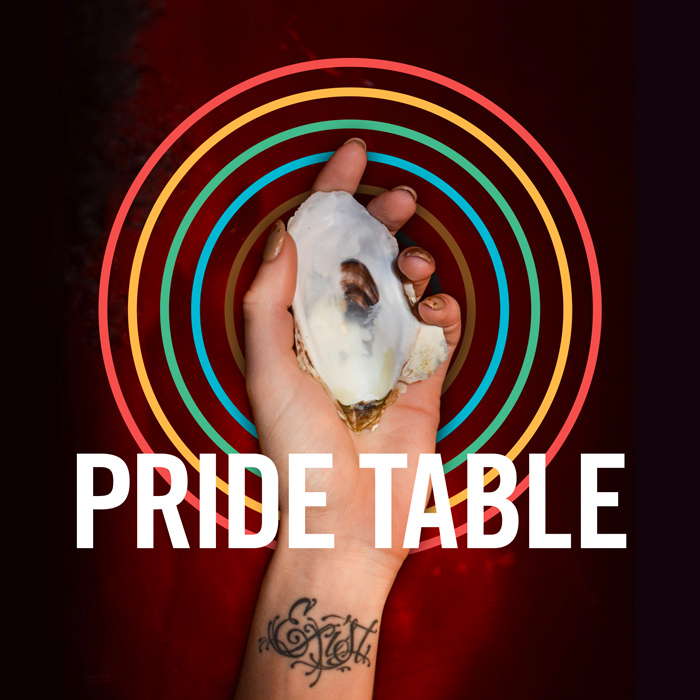 PrideTable is a two-week-long (June 17-29) pop-up theatrical dining experience with five courses and five personal stories from a diverse and intergenerational team of LGBTQ+ chefs. Each night will include all five courses and stories. Today, we are announcing our five chefs and storytellers! Engage all five senses as you immerse yourself in these stories from Chefs Charle Anderle, Dima King, Martin Boyce, Mellissa Santiago, and Woldy Reyes.

Chef Charlie Anderle: Charlie Monlouis Anderle creates lucid, multi-sensory and food-centered events. Their culinary values are rooted in a diaspora of intertwining chosen and blood family based in Martinique, California, and Brooklyn. They are also an emotional and physical support and advocate of birthing persons during pregnancy, labor, and early parenthood.

Chef Dima King: Having to save his own life from brutal anti-gay attacks in his Russian homeland, Chef Dima became a refugee and fled to New York City, where he’s currently serving up an homage to his roots, mixed with his profound gratitude for his newfound freedom.

Melissa Santiago: Chef Melissa is a 24 year-old intern at the Hetrick Martin institute. She describes herself as “a young, beautiful Trans woman of color who loves to sing, dance and cook”! She is a community leader in the vogue ballroom scene, and dreams of opening up her own restaurant one day. Her mantra is “live in the now, and believe in a greater tomorrow.”

Chef Woldy Reyes: Having been featured in goop and New York Magazine as one of New York top caterers, Woldy has been exploring and modernizing his approach to Filipino cuisine. As the son of two Filipino immigrants Woldy learned and was inspired by his family, especially his Lola (grandmother) and father. Woldy continues to share his food culture with in his new venture, DOMINGA. DOMINGA named after his grandmother will be Woldy’s first brick and mortar establishment partnering with lauded Pastry chef Lani Halliday.

Chef Martin Boyce: After fighting in the Stonewall riot in 1969, Chef Martin opened a queer hangout called Everybody’s Restaurant, where his “Broken Glass Pudding” was an enormous hit… caramel pudding with shards of “Stonewall” protruding from the cream.

PrideTable is proud to partner with Hetrick-Martin Institute (HMI) and p roceeds will help support HMI’s Arts & Culture program on an annual basis.

Tickets are on sale for dinners between June 17-29, 2019 at Avenues: The World School at 259 10th Avenue.
Get Tickets @thepridetable

StoryCourse produces uniquely moving and delicious theatrical dining experiences which tell the stories
of marginalized voices. The story informs the menu and the menu informs the story.
www.StoryCourseNYC.com @storycourse