Home » Departments » Travel » Montana Glamping: This Is How to Find Your Inner Gay Cowboy

Glamping — AKA “roughing it” with creature comforts — is one great way to create a memorable vacation. We headed to Montana’s big sky country, where some visitors explore like Lewis and Clark, some ride like cowboys, and others retreat in luxury.

No matter whom I told the news that I was traveling to a dude ranch in Montana, the response was either utter disbelief or gales of laughter. Even my editor thought the situation sounded like a pitch for Netflix: Into the Wild with Noel Coward. I even had to convince my husband that Montana and Manhattan were not mutually exclusive. We could be urban cowboys living out a Brokeback fantasy.

On the other hand, what did we know of Montana? Was it a real life Brokeback Mountain? (Technically no, that was Wyoming.) Home to Yellowstone? (Yes, at least a portion of it.)

Named from the Spanish word for mountain, Montana is defined by its sky-scraping ranges, 77 of which are part of the Rocky Mountains. The very sound of it bespeaks something majestic. And it’s vast: the nation’s fourth largest state. Bisected by the Continental Divide, Montana is split into a mountainous west and an eastern expanse of prairie that’s part of the Great Plains. 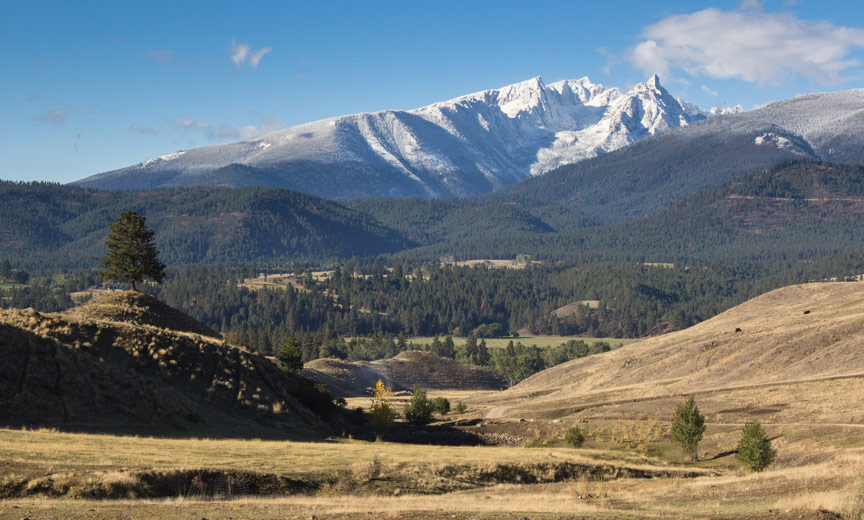 The Lay of the Land

We were headed to the Bitterroot Mountains, one of the longest continuous ranges of the Rockies which proved daunting to Lewis and Clark in 1805. They tussle with both the rugged terrain and the wildlife. You should remember another thing about Montana. It holds the largest grizzly bear population in the lower 48 states. Could that be connected to the fact that Montana’s population of just over a million residents is the least obese in the U.S.? Does they burn calories running from bears?

Before 1889, when Montana became the 41st state, the area was known as the Montana Territory, notable for a population of bison exceeding 13 million and just over 20,000 humans. Westward expansion nearly drove them to extinction in the late 19th century. But now bison (“buffalo“ to many) are on the rebound in the West. And as we scaled the hill to Triple Creek Ranch, we glimpsed a herd of free range bison grazing in the Bitterroot Valley.

At nearly a mile above sea level, Triple Creek and its neighboring CB Ranch encompass more than 26,000 acres ringed by snow-capped mountains. This was once the 40-acre home of a minister from New York (who raised four children with his schoolteacher wife). Then it became an all-inclusive “Montana Hideaway” in the 1980s, offering guests a Montana wilderness experience. Today, much of the adults-only luxury ranch resort is under a conservation easement, thereby providing an unofficial sanctuary for migratory wildlife such as elk and deer. The surrounding coniferous forests and wildflower meadows abound with moose, wolves, black bears, eagles — and mountain lions. 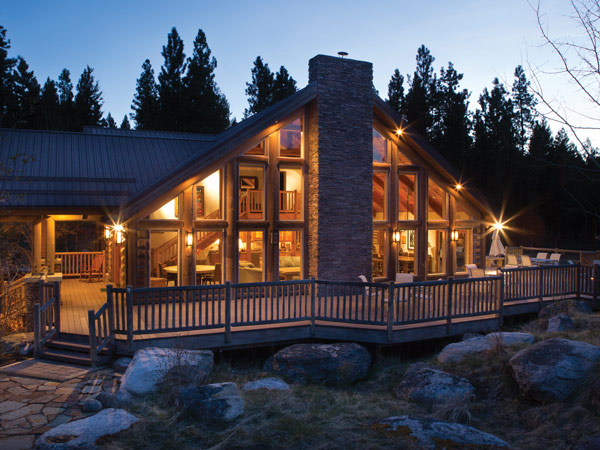 Read Next | This Is What Ft. Lauderdale Has to Offer Gay Travelers

Arriving at the Last Best Place

As we wound our way toward the Main Lodge, we passed a field of elk, part of a wild herd of more than 1,000 that claim the ranch as home. Up ahead was a large, unmoving bison — which turned out to be a part of the owners’ vast collection of Western art and sculpture.

For years, Montana has existed as “the last best place.” It was depicted in the works of Western artists as a land where cowboys and fly fisherman meander along pristine rivers and untouched countryside. Pulitzer-Prize winning author and bard of the West Wallace Stegner once wrote, “Something will have gone out of us as a people if we ever let the remaining wilderness be destroyed… We simply need that wild country available to us…”

Nestled within four million acres of national forest, Triple Creek Ranch sits on the southern side of Trapper Peak, the highest mountain in the Bitterroot Range. Under soaring Ponderosa pines, the ranch’s 25 private log cabins and ranch homes bear the name of local attractions such as Osprey, Piquette, or Sugar Loaf.

Our log cabin was called Rocky Knob: a 640-square-foot, one-bedroom luxury cabin with a wood-burning fireplace and a wraparound deck with private hot tub overlooking a lazy river. The massive double bathroom included two water closets, plus a double steam shower that could easily fit six cowboys (should such a steamy scene ensue). When an unexpected snowfall blanketed the cabin in white one night, it was tempting to mix a hot toddy from the all-inclusive bar and spend the next day in front of the crackling fire — or in the hot tub dusted with snow.

Instead, we had a date with a wrangler and our horses Ruger and Riley. Amidst the natural splendor of Triple Creek, it’s still possible to take in the grandeur that greeted Lewis and Clark. This is particularly true on a trail ride that traverses the same awe-inspiring landscape and offers panoramic views of the Continental Divide. 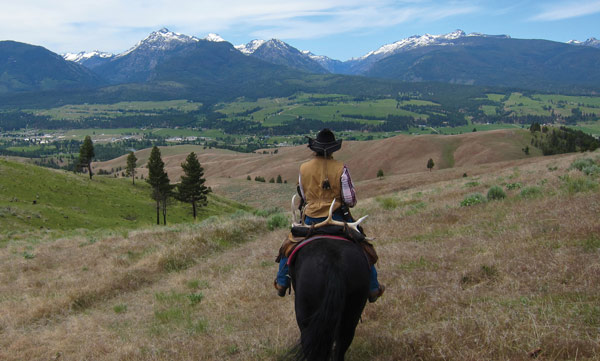 On Horseback at Triple Creek Ranch

At the resort’s Rider’s Roost, we chose chaps and dusters topped off with cowboy hats. Then we mounting our horses under the guidance of our young wrangler, a laconic cowboy with a killer smile. Triple Creek honors Montana’s ranching heritage with various trail rides over historic routes, including a cattle drive where riders and wranglers move up to 800 head of cattle over mountainous terrain. We chose a more leisurely route, one that would allow us to return to the lodge in time for cocktails and dinner.

A Taste of the West

A member of Relais & Châteaux since 1995, Triple Creek serves Western-influenced cuisine in a double-height dining room beneath the gaze of trophy taxidermy. The award-winning kitchen, complemented by a superlative wine collection, focuses on local purveyors of Western bounty. Huckleberries, for example, appear in muffins, scones, and pancakes. River trout serve as a reminder that a river runs through it (the ranch, that is). Upstairs, the Lodge’s Rooftop Lounge is furnished like an elegant gentlemen’s club during the Gold Rush. Post-prandial cocktails in hand, we sank into leather chesterfields in front of the fireplace and raised a toast to cowboys.

Ranching and grain farming fueled Montana’s economy for generations. However, now tourism is its fastest-growing industry. Over ten million guests annually visit such attractions as Yellowstone, Glacier National Park (where the melting glaciers are predicted to disappear completely in a few decades), and Little Bighorn Battlefield. At Triple Creek, guests with a bit of wanderlust head into the wild with a gourmet pack lunch for various day trips that include the ghost town of Bannack, which was once Montana’s first state capital. Or they can head to the Lewis & Clark Expedition Trail, which runs the full length of the Bitterroot Valley. There’s also the 2,800-acre Lee Metcalf National Wildlife Refuge and Big Hole National Battlefield. Both are located about an hour’s drive from the ranch. 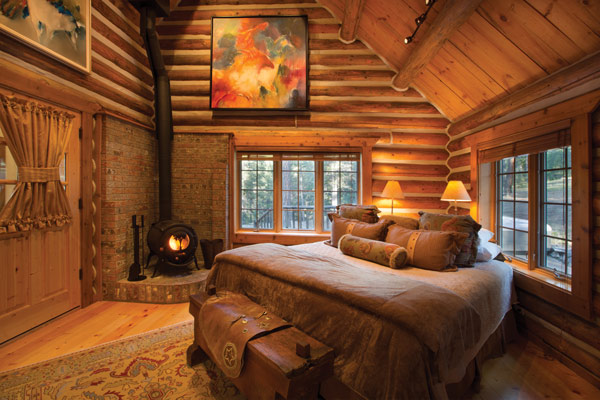 For those guests yearning to roam beyond the ranch’s immediate environs, Triple Creek Ranch owner Craig Barrett proposes his own personal Route du Bonheur (or “Road of Happiness”). This includes several other Relais & Châteaux properties. For the region’s most dedicated cowboys, Camp Roosevelt Arena hosts rodeos near The Ranch at Rock Creek, a 6,000-acre ranch located in Philipsburg, Montana. Further afield, in Saratoga, Wyoming, Magee Homestead has been a working ranch since the early 1900s. Cowboys once lived in its log cabins, which are now newly-renovated. According to Barrett, “Being able to live in Montana, the ‘Treasure State,’ is a dream come true.”

Triple Creek is also invested in preserving the culture of the Old West. Thus, the ranch houses one of the world’s most extensive collections of Western American art. Paintings by such Western masters as Frederic Remington and Charles Russell hang on the walls alongside bronze sculptures and more contemporary works. Budding artists who are inspired by the museum-quality collection can partake in the ranch’s annual Artist Workshop Weekends. Each autumn, contemporary Western artists take up residency at Triple Creek. The ranch transforms into a veritable artists’ colony for guests who paint “in the great outdoors,” as a cowboy might be more apt to say. 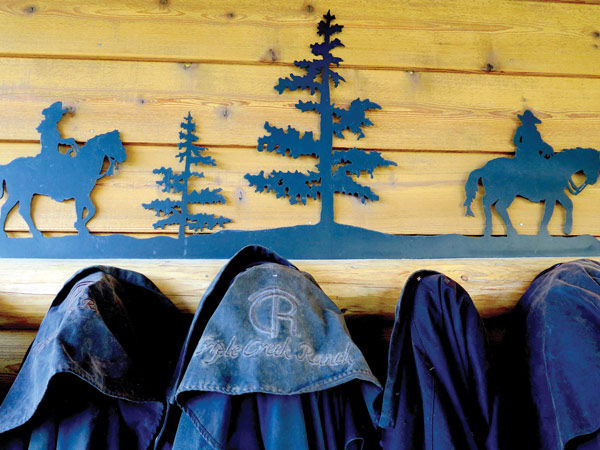 The ranch offers a wide array of diversions. (Panning for sapphires, anyone?) Nevertheless, we found it easy to understand why some guests choose to linger in their luxury log cabins and have dinner delivered to their doors. Each time we returned to Rocky Knob, we found another memento. There was the framed photo of our archery class, more freshly-baked cookies, cowboy poems on our pillows. We also heard there’d been a full-ranch buy-out by a group of gay men celebrating a 50th birthday. It wasn’t hard to imagine why the four-day party had been such a roaring success. Picture it: fly fishing, nature safaris, dog sledding, snowshoeing, skijoring (in which one, on skis, is pulled by an animal), river rafting. One can imagine the full range of activities ripe for gay mayhem.

Ranch guests fly into Missoula, which is about a 90-minute drive from Triple Creek. Or they can drop in by air, on one of two helipads. Due to the remote locale, no cell service is available, but Wi-Fi access is complimentary. However, we were too busy gazing into the big sky to fixate on phones. Stegner once wrote, “One cannot be pessimistic about the West. This is the native home of hope. When it fully learns that cooperation, not rugged individualism, is the quality that most characterizes and preserves it… it has a chance to create a society to match its scenery.” And who couldn’t use a visit to a place where both optimism and mountains soar.