Gaaays in Spaaace – LGBTQ No Longer Lost in Space

Written by Alexander Rodriguez| August 3, 2021| The Lens, Things to Do 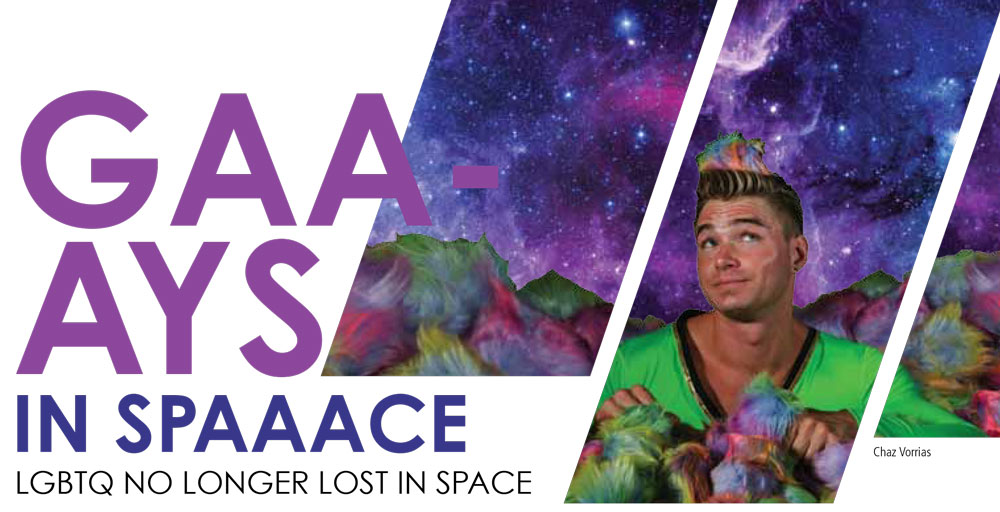 There was only one thing that would get me out of school early when I was growing up. Like clockwork, I knew that by mid-morning the school nurse would come in and take me out of class. No matter the nurse’s serious tone, I knew that my mom had left work early to take me out of school for one purpose: it was the premiere day of a new Star Trek movie. My mom had been raised on Star Trek in the 60s when a record-making fan letter campaign kept Star Trek on the air for a few more years. It wasn’t the special effects, and it clearly wasn’t the acting. It was the hope of a brighter future where no matter your gender, your race, your class, or the way you looked, there was a chance you could save the galaxy. The show presented a family bound together not by blood, but by a mission to make the universe a better place. As a chubby, Latino, gay kid with a single mom, what had inspired her growth into a strong woman without limitations was the same energy that would affect me throughout Star Trek’s many iterations and franchises. A fanatic? Yes, I am. We are called Trekkies and it is that same fanaticism that has kept the franchise going stronger than ever with multiple films, TV shows, cartoons, and conventions – Star Trek turns 55 years old this year.

And while the show’s creator, Gene Roddenberry, had continued to push the envelope with modern themes and not-so-subtle statements on war, racism, and sexism, it was not until 2016 that the LGBTQ community saw its first, confirmed representation on the screen. It was at that moment that entertainment journalist Dan Deevy knew that the entertainment business, in which he had two successful decades, were about to change. He organized a meet up in conjunction with the famous Las Vegas Star Trek Convention and what was to be a one-off event, gave birth to Gaaays in Spaaace, a fully-fledged non-profit with a mission to unify the LGBTQ sci-fi community, specializing in activism and advocacy for the continued inclusion of LGBTQ+ characters inclusion in entertainment.

It was something that I had to do. I didn’t know if others were going to feel the same or if they would show up and enjoy it.  The feeling in the room was an overwhelming sense of support and acceptance, love, and camaraderie. And so, that led to many more events. Over a hundred events have happened since then, across the country from Los Angeles to New York.  This entire community started because of that night. And that, to me, is what made that night so special. It was the beginning of one the most gratifying things I have ever done in my professional life.

Dan started watching Star Trek by chance. Dan and his grandmother would sit and watch The Honeymooners late every night, the reruns that happened to be broadcast right after was, of course, Star Trek. Dan was hooked. Dan would later go on to cause a viral sensation when he spearheaded and executed a campaign to urge CBS to resume Trek-related television programming. He, on behalf of fans across the nation, delivered 70,000 mini muffins to CBS Studios with the message “WE WANT WORF” in an attempt to give actor Michael Dorn’s character a Klingon-related show. Don’t worry, the muffins were donated to a local food bank. It was through Gaaays in Spaaace (GIS) that he found his own personal relationship with Star Trek as a gay man was a shared one. The Trek Universe was finally telling our stories. Gay sci-fi fans have always been present, and now the sci-fi industry is finally listening.

Our society has finally grown to the point where telling a story on a mainstream TV show is no longer cause for advertisers to back out to protest the show. So now that fear of reprisal has been mostly eliminated, they can now tell our stories. Over the years, I have talked to the various actors on the show and it’s something they have always fought for, but because of restrictions, they were unable to tell our stories. But now they are. And let’s face it, we are an interesting community, and we have stories that are incredible and intricate and amazing, not just to us, but to everyone. It really is amazing that our stories are finally being told.

CBS’ recent Star Trek Discovery would continue that energy, casting openly gay actors, featuring the first television gay couple in space, and casting the first non-binary and trans actors. And while Star Trek’s vision has always been progressive, there were die-hard fans not happy with the LGBTQ community being welcomed at the table.

My response is, “Why do you watch Star Trek? How can you be a fan of Star Trek and object to the inclusion of gay characters?” The point, the meaning, the heart, the reason why it has existed for over 50 years now goes completely over their heads. If, however, the question comes from someone who is not necessarily coming from such a bigoted place, but more of a “look, I get it, gays exist but why did there have to be so many?” To those people, I would hope that, after watching, after spending time with those characters, I would hope that they would no longer ask that question. I would hope that they would come to realizations on their own. We are of immense value, and we have every right to be there as much as everyone else.

Dan recounts a chat he had with Rod Roddenberry, Gene Roddenberry’s son, regarding the lack of gay characters in Trek.

He said, “Now, this is not me. I just want to be clear. I’m not saying this, but over the years I have heard people speculate that the reason you have never seen a gay person in Star Trek is that it’s been cured by the 23rd century.” And when he said that to me, my jaw kind of hit the ground, mostly because if you were someone who believed that being gay was somehow a mistake or wrong, if you believed that, then the explanation that it was cured makes total sense. And that terrifies me because if you can make an argument like that, it is something that needs to be unequivocally disputed and shut down, which is what happened when Sulu was introduced as gay in Star Trek in 2016. Gene always wanted to have gay people represented in Star Trek. He was just never allowed to by the censors, the studios, and the networks.

Not only has GIS become a safe place for the LGBTQ community, but it has also become THE go-to organization for a multitude of Trek actors. Many of the faces from the wide array of franchises have all taken part in GIS events, believing in its mission. And not even COVID could keep the GIS family at bay. Dan quickly created a series of online events that made it easier for the celebs to take part, but also made it possible for a fan from a small town in the middle of nowhere to chat with a Trekkie from Los Angeles. The group shared stories, exchanged favorite quotes, and supported each other in getting through the pandemic. 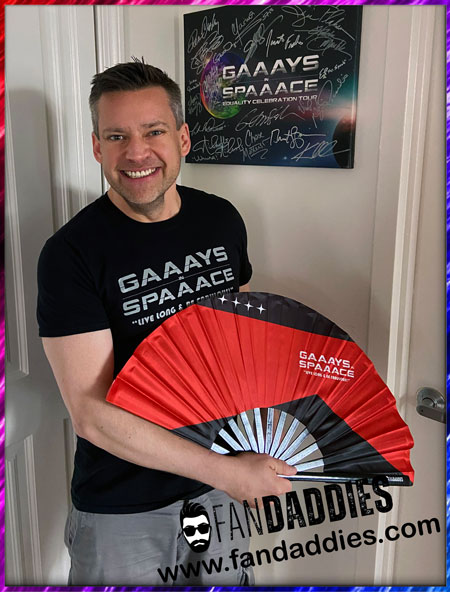 In celebration of Star Trek’s 55th Anniversary, the 20th Anniversary of Creation Entertainment’s Vegas Convention, Gene Roddenberry’s 100th birthday, and William Shatner and Leonard Nimoy’s 90th birthday, GIS has pulled out all the stops for their annual Vegas get-together for The Wrath of Vegas 2021, a week-long celebration featuring panels, parties, meet-and-greets, and gatherings. Their events carry on the mission of inclusivity with events catering to those with families and those who are differently abled. Everyone is welcome. This year’s event also marks an exciting development.

The panel this year will highlight our new partnerships with actual space agencies. They are building rockets and planning for the day, which is not far away, when going into space is something that we do. That is a reality. And now with all these new partnerships, we have been able to expand on our original mission to advocate for the inclusion of LGBTQ plus characters in science fiction, storytelling, and pop culture, to now include actual sciences.

What does Dan think the future of Star Trek and the LGBTQ community looks like?

I think it looks amazing. I think it is a place now where we both sides have always wanted to be. The community has always wanted to be seen and acknowledged and included in what Star Trek is doing, was doing, has done. I see our future just growing and expanding and becoming deeper and each really serving to enhance the other. I see nothing negative on the horizon, I see only good things for our community and Star Trek in the future, getting closer, deepening our ties, and working together.

Check out all things GIS at: https://www.gaaaysinspaaace.org. 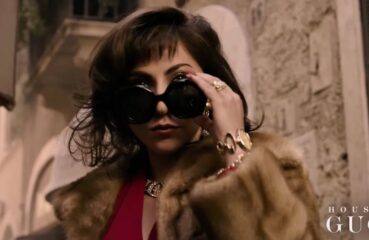 A ‘House’ Divided: Reacting to the ‘Gucci’ Trailer

The new trailer for House of Gucci just slinked its way onto the internet and… wow. Allow us to take a big gay breath before deconstructing it, beat by delicious beat. Get ready... 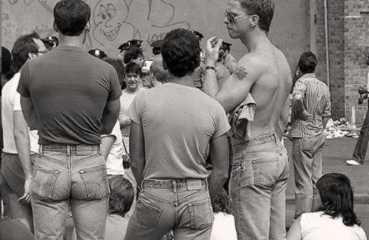 Equality = struggle. In order to fit in, at first you must stand out. This is the oxymoron of queer existence, and it is depicted brilliantly and boldly in the works of Stanley...