Written by metroeditor| November 5, 2019| Things to Do

Looking for the hottest gay parties on the planet? Whether you seek to shake it on the circuit, or just enjoy LGBTQ company on the slopes, the queer scene is getting spruced up for winter — and welcoming in 2020!

Ring in 2020 at Asia’s largest Gay New Year’s Festival! This fifth anniversary of White Party Bangkok promises a decadent five days of parties. Last year’s event was named the Circuit Festival of the year, and this year will strive to keep that kudo. Parties include opening night, military- and jock-themed fetes on the way to The White Party on December 30th the Garden of Eden themed New Year’s Eve Party. whiteparybangkok.com.

What is a white party? These are gay circuit parties where attendees wear white.

Longing for a little tropical weather? Instead of watching the ball drop on TV, head to the Southernmost City and see legendary Key West drag performer Sushi ring in the new year by dropping onto Duval Street in a larger-than-life high-heel! gaykeywestfl.com

Head down under to Melbourne, Australia for 20 days of LGBTQ+ excitement. The event opens on with the Midsumma Carnival and culminates in the Midsumma Pride March. But there’s plenty of time in

between to enjoy the festival’s celebration of arts from a queer perspective and enjoy all that Melbourne has to offer. midsummer.org.au

Ready for a hot time on the cold slopes? A full week of events awaits at the oldest annual gay ski week celebration in the nation. Special packages are available for ski week virgins and ladies. Over 20 events offer something for everyone’s tastes – even if you prefer to skip the slopes and focus on the aprés-ski. gayskiweek.com

The largest gay ski week in Canada has been happening since 1992, and 2020 promises tons of events to welcome you to the party! The January 31 Parade Day – known as the Whistler Pride SkiOUT & March – begins at Mid Station on Whistler Mountain and sees festival attendees slalom down the to Whistler Village with massive Pride. whistlerpride.com 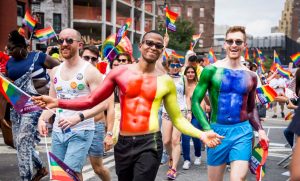