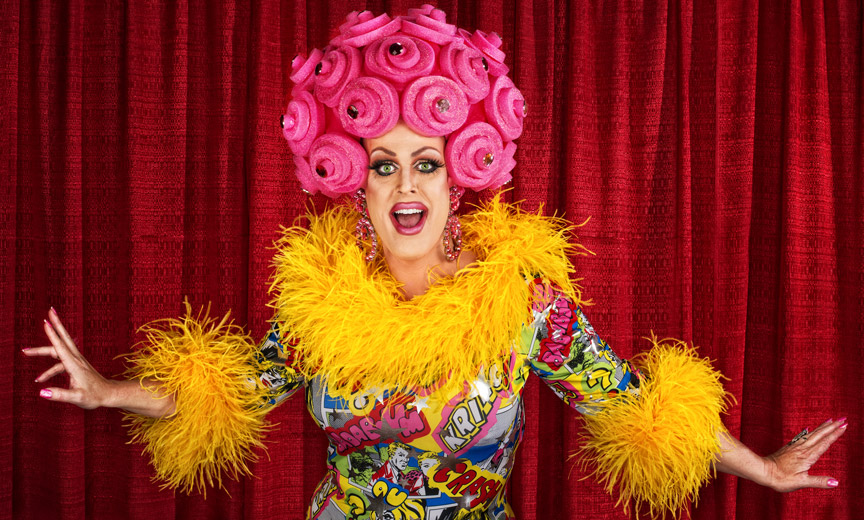 I grew up learning to associate Halloween with disappointment. Little did I know, the glittering costumes I’d dreamed of were just a few decades away.

Growing up in rural America, I often dreamed of being someone else. And since my mother always told me, “You can be anything you dream,” I’d attempt to push the limits when Halloween came around.

“Wonder Woman!” I would beg — and end up dressed as the Six Million Dollar Man.

“Batgirl?” I would plead, but Batman it would be.

I was so drawn to colorful, feminine costumes. What can I say? I wanted to believe they could transform a husky little gay boy into something magical. But every year, I’d be overruled by my dad’s drumbeat of: “You’re a boy. What would people in town think?”


The closest I got to glory was going as Elton John. Unfortunately, this also led to my disastrous decision the following year to dress as pop sensation Shaun Cassidy. I mimicked one of his album covers — feathering my hair just so and wearing an open white shirt and white pants. Several kids guessed I was dressed as the cafeteria lady. And when I sat in ketchup at lunch, an older teacher (who must have been confused about my gender) actually pulled me aside and asked if I knew I was spotting.

Going All Out for Halloween

After that embarrassment, I mostly stuck to vampires and ghosts. My husband Gary had experienced similarly disheartening costume experiences growing up in small-town Illinois. So, when we moved to Saugatuck-Douglas, MI, we were not prepared for the fervor with which they cherished the holiday. Each year the little town of Douglas tossed a huge adult costume party that drew thousands.

“No boxed costumes,” a friend warned us the first year. “Go all out — or watch from the sidewalk.”

Gary and I shared a look and nearly began to cry.

When he first proposed that we go as Toddlers and Tiaras, I was interested. When he clarified that he meant I should be the little pageant girl with him as the insane stage mom, I was more hesitant. Despite the fact I was at that point in my life finally out, in love and happy, my excitement was clouded by the ghosts of Halloweens past. I’d been taught to be scared and ashamed. Sensing my unease, Gary reassured me: “It’s our time to shine.”

So I headed to Goodwill, where I found a sequined minidress that was perfect for my costume. (It was a size 8. I nearly broke a rib squeezing into it.) As I picked it up, a woman actually tried to rip it out of my hands. “My daughter needs this for a school dance!” she declared.

Read Next | Secrets of Beauty and Fame: This is “Dancing Queen” Alyssa Edwards

Moving On Up the Halloween Parade

When the night of my very first adult Halloween parade arrived, I couldn’t stop myself from shaking. This was partly due to the fact that it was 38 degrees, and a thin layer of sequins does little to protect a body from hypothermia. But it was also overwhelming to finally don the kind of sparkly costume I had always wanted to wear. Better still — the crowd loved it!

The next year, we were flattered to be asked by the organizing committee to walk near the front of the parade. We went as Rachel Zoe and Brad Goreski of reality television “fame.” As we strutted down the street wheeling racks of clothing, people cheered and called to us like celebs on a red carpet. “Rachel! Brad! Over here!” I’d toss them looks over my sunglasses and sip from my Starbucks cup full of vodka — just like Rachel (allegedly).

And then it happened: The following year we were asked to lead the parade. “Really?” we asked the parade chair. “Are you sure?”

Gary and I spent what seemed like an eternity pondering potential costume ideas before we finally hit one that we hoped would be perfect. Then, we shopped for months. We asked our neighbor — a former makeup artist — to help us get ready. We invested in legitimate wigs and choreographed an entire routine. And when we high-kicked our way down the street as Vegas showgirls, our two-foot-tall feathered headdresses dancing in the breeze, I thought of my mother’s motto as I waved to the crowd: You can be anything you dream.

It had turned out that she was right, of course. It had just taken me a few decades to finally figure out how.

Wade is the author of several memoirs and novels. Learn more at ­waderouse.com.