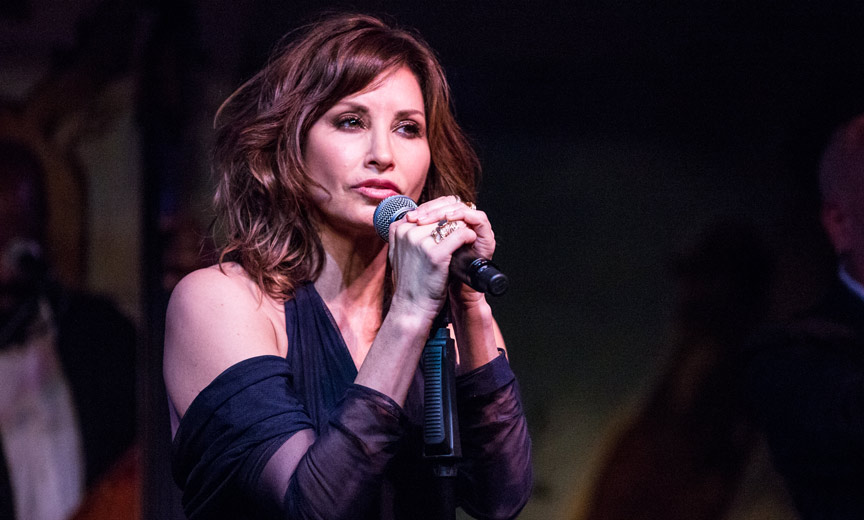 The star of such steamy films as Showgirls and Bound, Gina Gershon, proves she can deliver live on stage in Wild Women Don’t Get the Blues.

“It’s nice to see all my friends here,” Gina Gershon greeted the crowd as she stepped on stage in a tuxedo jacket that created a daring, plunging neckline. And, indeed, the house seemed packed with notables: This American Life host Ira Glass chatted amiably at the bar with someone who described himself as “a screenwriter and director,” and one could easily have cast a fine independent film with occupants of the tables leading to the stage. The audience hooted appreciatively when Gershon removed the jacket to reveal a truly extraordinary, nearly-backless halter top with ruched, diaphanous sleeves that she could alternately pull around her neck like a hood or let hang in cold-shouldered elegance. “You guys are easy,” she said in response to the ovation.

But Gershon is offering way more than beauty in her residency at the Café Carlyle: there are also laughs! She uses the title of the show — Wild Women Don’t Get the Blues — to offer tribute to several spirited ladies who helped shape her. This includes her Grandma Pearl, an inadvertently bigamist gambler who always saw her married lover on Thursdays. “Isn’t Thursday the sexiest night of the week?” Gershon observed. “Let’s just pretend it’s Thursday.” She also gives Pearl’s sister, Aunt Ida, credit for her first sex talk: “Men just want to shoot their junk up in ya,” Gershon recalled Ida saying — also noting that Ida always carried false eyelashes and a douche in her purse.

Pearl’s housekeeper, Marie, also got a shout out for both telling Gershon: “You ain’t the marrying kind!” when Gershon was only nine years old and also for advising Gershon that a lady always ought to carry a knife (Gershon whips one out onstage and displays that she can handle it dexterously). Indeed, the gruff wisdom of Marie got a whole song written by Gershon, one of several on which the actress surprised the audience by accompanying herself on the “Jew’s harp” (also known as the “jaw harp” and a variety of other names — it’s an unusual little mouth instrument that produces a pleasant “boing” of a sound).

Early on, Gershon introduced her musical director, the wonderful trumpet player Steven Bernstein, but insisted she couldn’t tell the story of how they met because she was “trying to keep it classy” for the Carlyle crowd. Considering how fearlessly blue some of other her material was, one can only imagine what was deemed to dark to share. It’s also worth noting that I have rarely seen a performer introduce her band (which also included Eli Brueggemann on piano, Brad Jones on bass, and Jerome Jennings on drums) with more gusto or more genuinely dance it out to their solos. 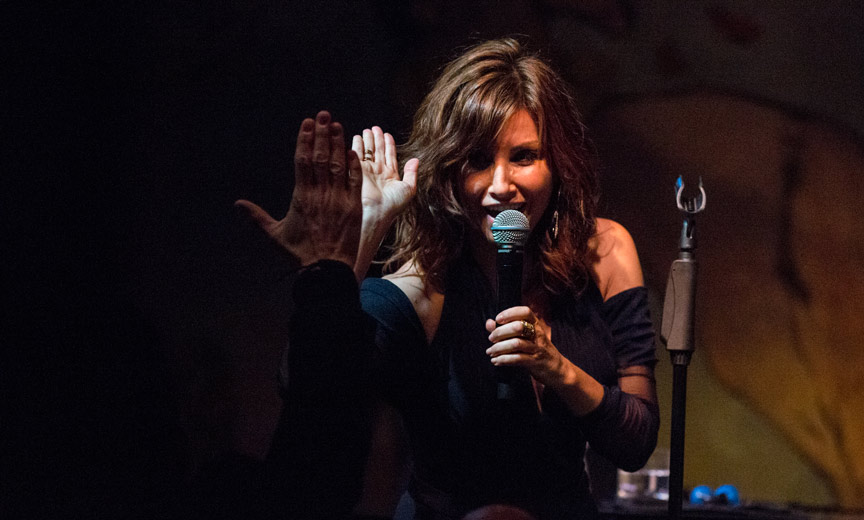 Nevertheless, it was Gershon’s undeniable sensuality that stole the show, and it came in a variety of flavors. There was the tough girl, delivering “Wild Women Don’t Get the Blues” and “I’m Gonna Catch Me a Rat” with a snarl. There was the supper club chanteuse cooing “He’s a Tramp” and “My Heart Belongs to Daddy” with a breathy bump-and-grind. There was even the jilted lover, making her way through the stages of a break-up with an extraordinary medley that combined such diverse material as “You Belong to Me” and “Nothing Compares 2 You.”

We also get some behind-the-scenes dish, as one might hope from a movie star doing confessional cabaret. Memorably, Gershon describes her early days heading from school into show business — during which she auditioned, waitressed, got a small part, waitressed some more, got a bigger part, went back to waitressing, and then finally got her big break — in a prestige picture to be helmed by a complex Dutch director — that turned out to be Showgirls. She recalls a moment when she was hanging from a rope, about to descend into a sea of nude dancers, and she thought, “I studied the classics for this?!” She also recounts the director approaching her with the idea that they ouhght to show her vagina on film. Her solution: “I needed to outcrazy the crazy,” she said — suggesting that instead they dive in and show audiences the inside of her genitalia like nothing they’d ever seen before! The director relented.

The evening’s vocal highlights came when Gershon really allowed herself to let loose and open up. This includes delivering big notes with invigorating abandon on “In the Dark” — which she ostensibly chose as a tribute to Caryle king Bobby Short but is simply a sensational number for Gershon. She also rocks the house with “Just Dropped In (To See What Condition My Condition Was In” amid a frank discussion of her experiences with ketamine treatments; the rendition was so wild that the audience could barely believe it was written by Kenny Rogers.

Years ago, I saw Gershon playing Rose in Bye Bye Birdie, and I remember thinking that – while she delivered the material capably – she was somewhat underserved by the big bustle of a Broadway stage. However, in the intimate space of the Carlyle, Gershon’s shoulder-swaying, hair-tossing, naughty-smiling sexiness rivals that of Jessica Rabbit famously sauntering onto the stage to croon “Why Don’t You Do Right?” in Who Framed Roger Rabbit? To Gershon’s credit — she’s just a beautifully animated but one-hundred-percent real.

Gina Gershon will perform Tuesdays through Saturdays at the Cafe Carlyle through June 16. Available tickets and show times are on ticketweb. 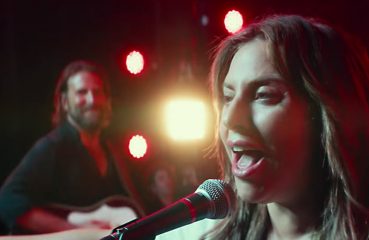 “A Star Is Born” Again, with Bradley Cooper and Lady Gaga

Here’s your first look at the third remake of A Star Is Born, and one thing you can say about it from the preview: it’s not playing safe. This is, of course. the third... 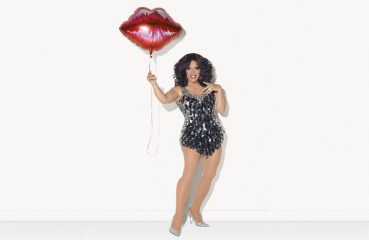 We asked Mrs. Kasha Davis of RuPaul’s Drag Race what she would do in Washington, D.C. — and she gave us a surprising answer. Chances are, unless you’ve seen her perform...