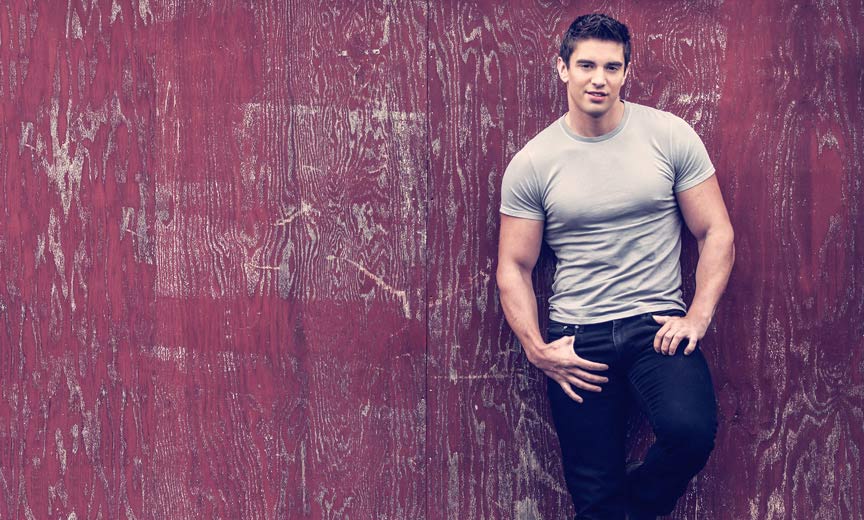 A unique voice at a special moment, singer-songwriter Steve Grand introduces himself in an exclusive interview with Metrosource — on his terms.

Steve Grand’s story has become a streamlined, star-is-born story, easily packaged for the media. But after speaking to him for an hour, one finds that he is so much more.

The road leading to our conversation begins in Lemont, IL, which Grand lovingly calls one of the “blandest suburbs outside of Chicago.” He uploaded a self-produced (but polished) video for his song “All-American Boy” on YouTube, and it went viral. That success translated into a Kickstarter campaign to finance the recording of a debut album. Funders blazed past the project’s goal of $81,000, donating over $326,000 and making it the fundraising platform’s third-most successful music project to date.

Grand secured veteran producer Aaron Johnson to work on the album — through cold emails and sheer chutzpah. The result, All American Boy, dropped on March 23 of this year and became yet another success story: number 3 on Billboard’s Independent Albums chart.

In many ways, this remarkable success makes Grand emblematic of today’s music industry — for both his new-media origin story and his being an out singer-songwriter who doesn’t hide his sexuality behind indistinct pronouns.

Then again, fame on the internet brings up more than one’s current projects. Anyone who’s ever done a Google Images search on him knows that Steve Grand is a handsome man who has posed for some sexy underwear pictures around the time he was 19. While they’re not related to his music career, thanks to the nature of the internet, they are part of the now-25-year-old’s permanent record. Grand is aware that some who find the cache of beefcake photos might see someone seeking fame for fame’s sake; to him, they’re just online remnants from another life.

“They’re not inherently bad or shameful,” Grand tells me, “but I don’t feel like they’re what I’m about now.” As it turns out, where he is now is even more interesting.

Listeners can come to All American Boy from almost any musical direction. Katy Perry fan? You’ll love the track “Soakin’ Wet.” Prefer Fall Out Boy? Their sound inspired the album’s emo-lite opener “Say You Love Me.” Into Eurodance? Try “We Are the Night.” Honky-tonk? “Whiskey Crime.”

To be clear: These aren’t just outside observations, but rather comparisons from Grand himself. Though many music artists are loath to compare themselves to their contemporaries, Grand eagerly cites his eclectic influences. He’s even happier when listeners become acquainted with him through a familiar style only to find themselves enjoying him doing something else entirely.

“I think great songs come from all different genres,” Grand explains. “A good song could be produced in all different ways and still be compelling. I write the songs and then I try to find the production and style and genre to deliver the song in the best way to make the story shine through.”

While its song styles may be disparate, All American Boy works as a surprisingly cohesive unit — something rarely seen in the age of iShoppers. Thematically, he’s exploring those confusing moments of our early 20s, when most of us know what love and lust are — but not well enough to use them responsibly.

In some moments, Grand plays the bad boy; in others, the victim: “My good intentions — your favorite weapons / And still I’ve yet to learn my lesson,” he sings in “Stay.”

There are songs wherein Grand’s being gay is a nonissue while others take on situations unique to dating as a young gay men.“Say You Love Me,” for example, is a ballad to a “blue-eyed angel” the narrator crushes on. But that crush already has his eye on someone else: a “girl out in Palm Springs.”

Listened to in order, the 13 tracks ultimately tell a carefully-plotted story of a period of those gray years entered as a boy and exited as a man. Grand, who came out at age 19, is aware he’s in a unique position at a special time: He’s speaking to a large, varied audience that, by and large, accepts him as a gay artist at a time when the battle for LGBT equality has recently made great advances.

However, that doesn’t mean he’s felt unconditional acceptance from all corners of the community. Anonymous commenters on gay blogs sometimes discredit Grand’s work — dismissing him as just another built body and handsome face. Grand sees these types of criticisms as a symptom of a divisiveness that exists in the gay community, and he has a theory about where it comes from.

“We fought so hard to get where we are, and obviously we still have a long way to go, but we’re so used to fighting, and now we have less fighting to do, so it’s like we turn our claws at each other,” he explains.

He continues: “I have never been able to understand how people who have been misunderstood or mistreated … then intentionally misunderstand and mistreat others when they know the pain of that.”

But what about the other side of the equality movement — all the positivity and acceptance: does Grand feel that, too? “Absolutely!” he says.

He brings up a fan named Tyler. Grand gets lots of email, direct messages, comments and (even as a new-media star) old-fashioned snail mail — and he reads most of it. After the song “All-American Boy” hit in summer 2013, Tyler made his own CD, sent it to Grand along with a message saying, Grand paraphrases, “I’ve waited the better part of my life for someone like you to come around. This is such a special day, and you’ll never know how much it means. I feel like my voice has finally been spoken for through your music … and I’m so grateful.”

Grand has also had his knowledge of community issues deepened by communicating with his fans. At his album release party, Grand met a funder who described living with HIV. Their conversation inspired Grand to become more outspoken on the subject of stigma. “There’s so much misinformation, and there’s so much hostility,” Grand learned. “It’s something that can get really nasty because it’s so close and personal and emotional to so many people in the community.”

So before those anonymous commenters suggest that the pretty boy in the underwear pictures should be quiet, they should know they’re hushing a good message. “The LGBT movement for equality is such an amazing movement,” says Grand. “There’s so much goodness going on in the world. Get out! See what’s happening! … It’s an energy that’s so important, and it’s infectious.”

As Pride approaches, Grand recalls his first Gay Pride celebration, which he attended in Chicago. “I was just accepting myself as a gay person, and I felt loved and embraced and supported by my community,” he recalls. This summer, he’ll return the love. He’ll be touring, with many of his gigs tied to Pride events. And as more of America discovers this all-American boy, one can only assume that the state of our gay union will continue to improve.

See how Steve responds to fans who want a little more than an autograph and photo.

For tour dates, follow Steve at @SteveGrandMusic or visit stevegrand.com. All American Boy is out now.

Sirs Ian McKellen and Derek Jacobi viciously discuss how they’ll be grand marshals of NYC Pride. What’s a girl to wear? Should Sir Ian bring a parasol? Will Sir Derek...

When we get to talk to people we love, we want to know what things they’re loving. It’s Questions of Taste: Daniel Franzese. METROSOURCE: Where was your last great...