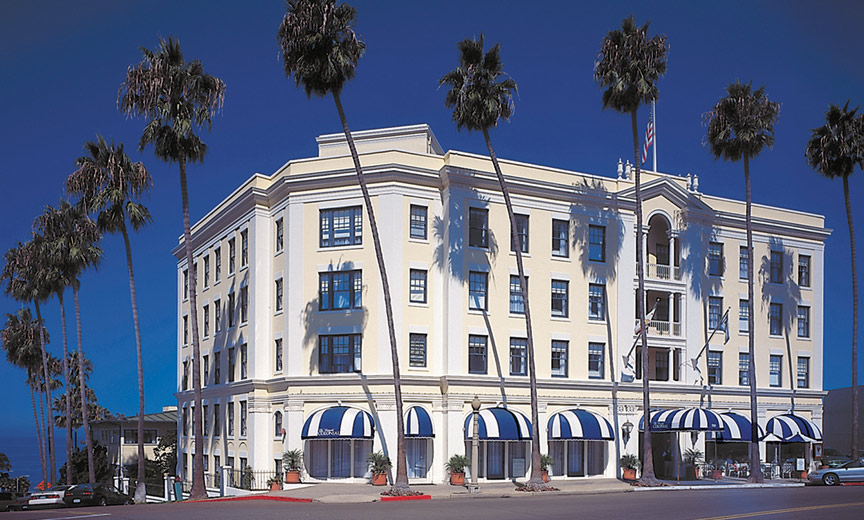 La Jolla translates as “the jewel,” and it is, indeed a gem of a town. It makes an ideal vacation haven for SoCal residents looking to get away from LA for a change of scenery and a little rest and relaxation. The trick for me has always been about finding an ocean view hotel within a reasonable price range with a certain Old World charm. The Grande Colonial is just such a spot. It offers the ambience of a European style hotel with the charm of a seaside beach cottage.

I’ve been coming to the Grande Colonial for many years, so when I heard the hotel was undergoing a major renovation, the news got my attention. And the results are impressive: the Colonial boasts new carpeting, drapes, furniture and light fixtures, updated bathrooms and more. The owners have given this grand dame a complete makeover while retaining the qualities that made it so charming in the first place.

A Room with an Ocean View

I stayed in the Ocean View Junior Suite, a spacious fifth floor corner suite with five windows to fully take in sweeping ocean views and the village below. There’s even a peek-a-boo window in the bathroom, in case you miss the ocean while showering. The beds are comfortably cloud-like and accoutered with divine linens. I could deduct a few points for some street traffic noise in the morning, but if I’ve learned one thing from my travels, it’s that even the most luxe accommodations have tiny flaws — just like diamonds.


Anything Else I Can Help You With?

Another draw of the Colonial is the personalized service — and that runs the gamut, from the front desk to the housekeeping staff and the restaurant. What more could you want? Upon arrival, I took advantage of the guest bicycles and went pedaling through town to reacquaint myself with the charming ambience of this seaside town. What’s more, when I realized that I’d gotten bike grease on my pant legs, the hotel took swift action and had them dry-cleaned within 24 hours.

If this spot is indeed the jewel of La Jolla, then Nine-Ten (the in-house restaurant) would be its pearl. While there are no shortage of fine dining options in La Jolla, there’s an added convenience of simply being able to head downstairs and dine in the on site, particularly when the food is as delicious as it is here.

I started with the braised artichoke salad which was delightfully light and refreshing. My main beef with artichokes is that they’re usually canned and soaked in citric acid. Not so at the Nine-Ten. The culinary team prepares them fresh and that makes all the difference. The artichokes were served thinly sliced, which allows the lemon artichoke vinaigrette to assert itself and the other ingredients (arugula, shaved fennel, celery, mint and armesan) a chance to breathe. My only quibble is with the portion size, because I finished it lickety split and was left wanting more. But maybe that’s as it should be when it comes to a starter. For the main course, I tried the Ora King Salmon with spring vegetables. The salmon was baked to perfection with a side of farm-fresh vegetables, which included fava beans, asparagus and several stalks of curlicue green garlic, which looked like something out of a Dr. Seuss book. An added bonus was how gracefully they honored a few requested modifications.

The Icing on the Cake

Seeing as how I was “on assignment,” I knew I would be remiss if I didn’t explore the dessert options. I went with the humorously named “Half-Baked Chocolate Cake.” Rest assured, this delicacy was in fact fully baked, and would be more aptly described as a molten lava chocolate cake. It’s served with house-made vanilla bean ice cream and caramel sauce. I told myself I would just have a few bites, (to better inform the Metrosource reader, of course). But one thing led to another and before I knew it, I was literally scraping the molten chocolate from the inside of the dish to get every last morsel. Throughout the meal, the service was attentive and accommodating.

The ambience manages to be both decidedly retro and yet fresh and new all at once. Located on the rooftop of a fairly nondescript building in the heart of La Jolla Village, it may takes a little sleuthing to find this sanctuary, but it’s well worth the effort. An elevator brings you to the penthouse level. That in turn leads to the yoga boutique, where you can browse a wide range of jewelry, clothing, yoga paraphernalia, healing crystals, elixirs and potions. It’s also where you can sign up for a variety of classes that include aerial yoga. In addition, take note of special events featuring Fire Spinning performers and New Moon Cacao Ceremonies. You can find a full list of otherworldly and woke events on their website at trilogysanctuary.com.

But for a quasi-vegan foodie like me, the main draw was their 100 percent organic and plant based café. You’ll find a bevy of nutritious and delectable meals, salads, smoothies and desserts.

My biggest challenge was deciding what to order from among the voluminous menu options. Ultimately, I settled on the Perfect Tacos which lived up to their name. The dish includes two housemade corn tortillas filled with quinrizo (quinoa with a chorizo seasoning), avocado, eggplant bacon, pico and their signature, somewhat-spicy almond “love” sauce. Choosing from a chalkboard menu of 12 tantalizing smoothie options with names like Magic Matcha, Tropical Pitaya and Lust, I again had my work cut out for me: I went with the Nature Smoothie because I was in the mood for something healthy and refreshing. The listed ingredients included coconut water, apple, cucumber, celery, kale, spinach, fennel, avocado, parsley, ginger, lemon and lime. Full disclosure —at my request they subbed mint for a few of the ingredients, earning them additional points for the ability to accommodating dislikes and dietary restrictions. The meal was so good I went back the next day to try a few more menu options, then headed out for the drive home feeling fully fortified. 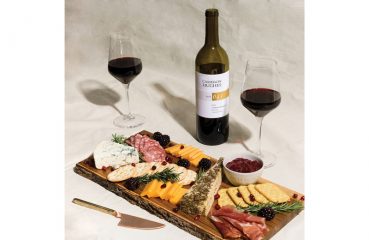 Want to Improve Your Health? Have a Glass of Wine

When Cameron Hughes wine released a “wine-bow” featuring six of their most popular wines in a rainbow-splashed six pack for Pride, they certainly attracted our attention. We... 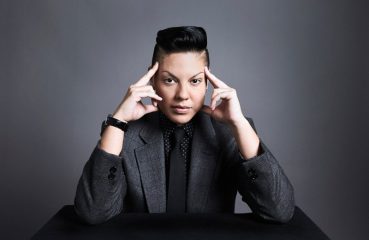 Back in the 1970s, Woody Allen wrote that being bisexual “immediately doubles your chances of getting a date on Saturday night.” Well, the world has undergone more...