Lady Bunny Takes You Behind the Scenes of HBO’s New Doc, “Wig” 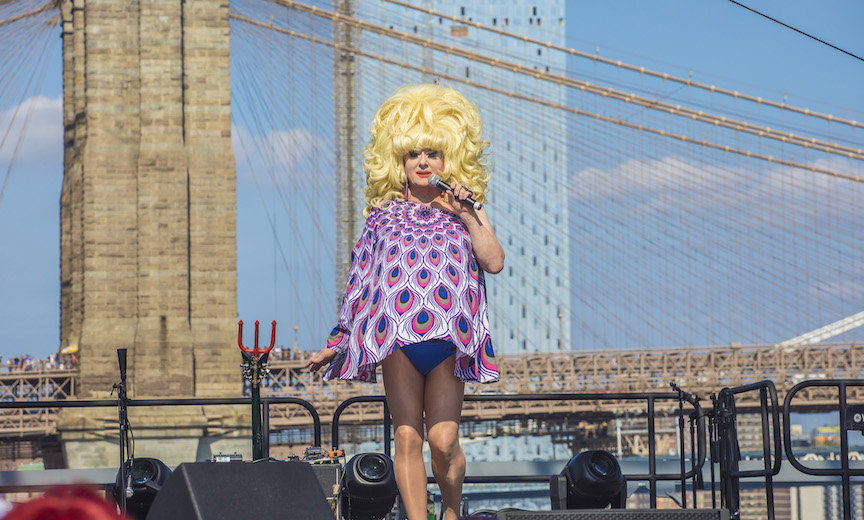 HBO is premiering a new doc about the resurrection of Wigstock tonight at 10 pm, just in time for WorldPride next week. In it, you’ll not only see the beginnings of today’s drag phenomenon, but early images of RuPaul and footage of two immortal Hedwigs — creator John Cameron Mitchell and Neil Patrick Harris, who co-produced Wig with husband David Burtka and others.

None of this 90-minute thrill ride could have happened without the driving force behind the original Wigstock, New York drag queen and local luminary Lady Bunny. We caught up with her on the eve of the show’s premiere to talk about how Wigstock has evolved into a cultural touchstone, not only for the city, but for the entire LGBTQ community.

Metrosource: Wigstock has evolved so much since it began as an opportunity to bust drag out of the nightclubs and into the open air. Would you trade the edginess of what was happening at the Pyramid Club back in the ’80s for the acceptance that drag has gotten since then?

Lady Bunny: The edginess is what drew me to drag, yet the wider acceptance has brought bigger audiences and paychecks? Can’t edgier drag queens have both? I’m old and I’m greedy!

Metrosource: People love to talk about “the good old days.” Was there even such a thing during the ‘80s in terms of drag?

Lady Bunny: These days, there’s more inclusivity, less gender conformity and drag has moved from the margins of society into something more mainstream. The old days which were aren’t ever coming back, so we might as well be content with saying the good old days are now. Drag clubs have always been inclusive of trans performers. I wanted to do drag because of a black trans performer I grew up watching named Tasha Khan back in Chattanooga, Tennessee.

I personally focus more on how good performers are than what they identify as. I don’t leave a show thinking how inclusive it was; rather how entertaining it was. One issue I have with some Instagram queens is that they may look fantastic, but that’s their main talent. I’d rather see a booger queen who can tear up the stage than an immaculately made up doll. Some queens have both polish and talent — and I wish I were one of them!

Metrosource: Why was it a good idea to finally bring Wigstock back in 2018? It seems that the LGBTQ community was more welcomed in the Obama era than during the Trump regime. Do you see Wigstock as pushing back against that?

Lady Bunny: A party of wig-wearers is always on time. You can’t have too many. And I’m not waiting for Trump or any other Republican to welcome me. I do my thing irregardless. When the festival began in 1984, the jackass Ronald Reagan was president. Having a different jackass in the White House now doesn’t deter me as long as we can still get the permits for venues.


Metrosource: Are there differences between the original Wigstock and the one that took place last year? Or is it just that the scale of the event is so much larger?

Lady Bunny: The venue was much slicker and expensive, yet the audiences on the pier in the ’90s were much larger than the 2018 festival shot for Wig. People are perhaps less likely to party with abandon nowadays since they don’t dance as much and are typically clutching cell phones at all points to document everything, as opposed to living in the moment. We used to party with each other face to face. Now we “party” with our social media followers — including those we’ve never met and perhaps never will meet.

Metrosource: If you could go back and visit the Lady Bunny who began Wigstock, what would you tell her? Things to beware of? Things to remain excited and optimistic about? Both?

Lady Bunny: Great question! I’d tell her to find or erect a semi-covered space to shield performers and audiences from rain. No one likes a soggy drag queen with matted wigs and runny mascara! Thousands did come to Wigstock during the two years it rained, but they couldn’t clap because they were holding umbrellas. The performers thought we all had bombed!

Metrosource: HBO is going to bring a whole new level of awareness to both Wigstock and drag with this documentary. What do you hope audiences who see it will take away?

Lady Bunny: That not all drag is cookie-cutter, padded, doing lip-synch and runway or considering ourselves a brand. Some of us are total kooks with no heads for business whatsoever. We do what we do because we love it — not because we’ve picked what will sell the best.

Metrosource: If you could bring anyone who’s gone — who’s passed away — to either Wigstock or show them the film, who would it be, and why?

Lady Bunny: Tom Rubnitz, who directed the first Wigstock film short featuring both festival footage and the B-52s in Woodstock. Tom was a Pyramid Club regular who believed in me and the event very early on in its humble beginnings. I respected him immensely, and would love to show him Wig. He actually died of AIDS before Wigstock: The Movie came out in 1995.

Metrosource: Do you think Wigstock is now a permanent part of NYC culture? Could you envision it going on after you’ve stopped organizing it? Is that even a goal for you?

Lady Bunny: It’s not permanent, since we just came off of a 17-year break. The future of the event is uncertain, even for this coming year. But I’m faithful that NYC will remain a hotbed of drag creativity. If Wigstock does not happen this Labor Day, by next year I can hopefully attract the venue and sponsors we need. And if you’re craving an outdoor drag event, Bushwig is the week after Labor Day in Brooklyn. Our sister festival is loads of fun, and I hope to perform at it again this year!