Since then, the book Truffaut eventually published about their conversations, Hitchcock/Truffaut, has become an indispensable resource on the art of creating lasting cinematic images. Now in documentary form, the highlights of their remarkable summit can be heard in their own voices, and accompanied by clips of the films they are analyzing and praising. THE WORD: As an added bonus, modern-day directorial greats including Martin Scorsese, David Fincher, Olivier Assayas, Wes Anderson, Peter Bogdanovich, Paul Schrader and Richard Linklater also weigh in — offering even more reasons to marvel at Hitchcock’s craft. COMING TO: Home Video

Ben is a father raising six exceptional children in the forest — lovingly drilling them in survival skills, athletics, philosophy, and free thinking.... 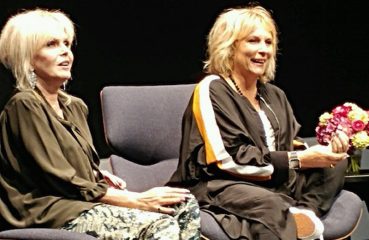 Last night in Manhattan, we had an audience with queens of comedy Jennifer Saunders and Joanna Lumley. It was lovely, sweetie darling....