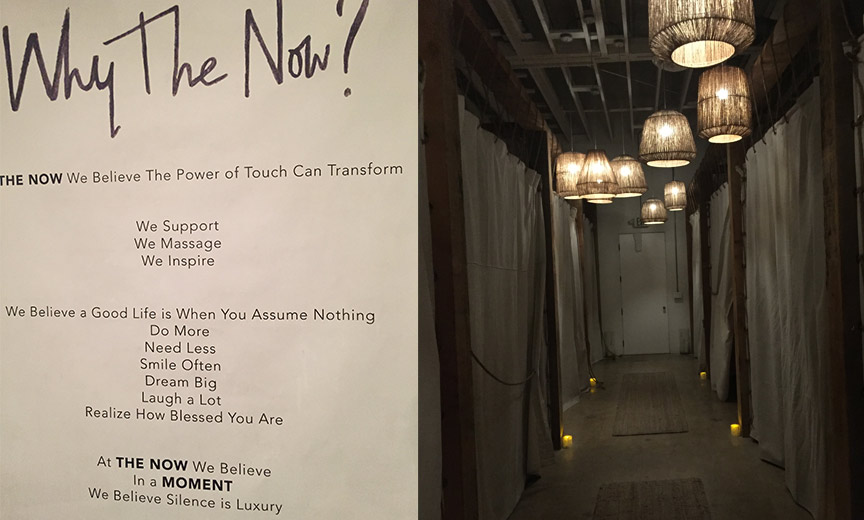 We sent a writer who is less than familiar with the rituals of massage to see if this boutique could ease him into it.

It’s been a while since another man has asked me to remove my clothes. The fact that the most recent occurrence was in a therapeutic setting made it feel no less consequential. I was “on assignment” – like Anderson Cooper, but instead of exploring the site of an armed conflict or a natural disaster, I was headed to get a massage.

The benefits of human touch are well-documented. Babies that are held have a much higher rate of survival. Why should we imagine that adults are any different? In this day and age when we’re glued to our phones, wasting time on Facebook, binge-watching our latest guilty pleasure, or stressing about Trump’s latest tweet, the importance of un-plugging and de-stressing has become not just an indulgence but a necessity. The Now – a massage boutique with four locations in Los Angeles (this one in West Hollywood, 3329 Sunset Boulevard in Silver Lake, 2407 Main Street in Santa Monica and 12019 Ventura Boulevard in Studio City) seemed like the perfect antidote.

To be honest, I’m not the ideal candidate for a massage. Thin-skinned and slight of frame, I’m not what you’d call a touchy-feely person. I was so ticklish as a child that I’d squirm and giggle every time the pediatrician tried to touch me with his stethoscope. Coupled with the fact that I haven’t been in a relationship for quite some time, this wasn’t just an assignment: It was an intervention.

The ambience at The Now is a curious mix of Santa Fe shabby chic and ‘70s New Age (with hints of Bali). I had mixed feelings about the faux animal skin throw and the gnarled tree trunk backless chair, but I had to silence my inner critic and surrender to the moment (“the now” if you will). Faced with a menu of customized options with names like “The Healer” and “The Stretch,” I chose the boutique’s namesake, “The Now,” a Swedish-style 50-minute table massage along with an aromatherapy enhancement. I was greeted by my masseur and ushered down a lantern-lit corridor (pictured)lined with treatment rooms. The therapist left for a few moments to allow me to disrobe privately (to whatever degree my comfort would allow).

Once I got past the nerves of stripping and lying down (at least I was partially covered by sheets), I was able to relax and surrender to the reality of the situation, as I waited for my masseur to return. I let the therapist know up front that my preference was for a calming, soothing massage — no deep tissue poking or prodding for me. And for the next hour, I got exactly what I needed; extended, soothing, tactile, (non-sexual) stimulation that counteracted the toil of my daily commute and everyday stressors.

My massage therapist was soft spoken, intuitive and responsive to my feedback. The only thing I might have changed would be the addition of some soothing spa music in the treatment room, which was surprisingly quiet but for the sound of an oscillating fan.

At $70 for a 50 minute session, I felt the prices were quite reasonable. And, for an additional $10, you can add an “enhancement” which — it turns out — is kind of like adding a topping to your frozen yogurt. I strongly recommend the splurge. The “aromatherapy” enhancement involved choosing from 4 scents prior to my massage. Then, during the massage, the therapist held the scent within inhalation range, asking me to take a few deep breaths. Other enhancement options include CBD lotion therapy, herbal heat therapy and crystal healing, among others.

By the time my session was over, I felt rested, rejuvenated and ready to incorporate this ritual into my weekly schedule. How touching. 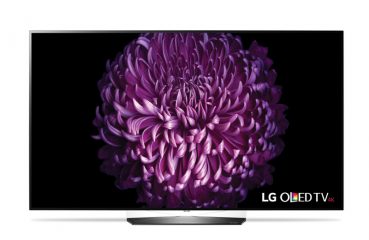 Is It Finally Time to Get a New TV? Terence Reviews the LG OLED

Terence managed to avoid writing about the topic of televisions for a very specific reason, until he finally fell for the set of his dreams — the LG OLED. Of all the gadgets... 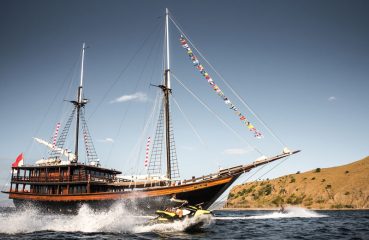 Power Splurge: How You Can Live Your Best Life As an A-lister

The fabulous people know how to live — we see it every day on social media (so it must be true). From private villas in remote locations to extravagant edibles, high tech...