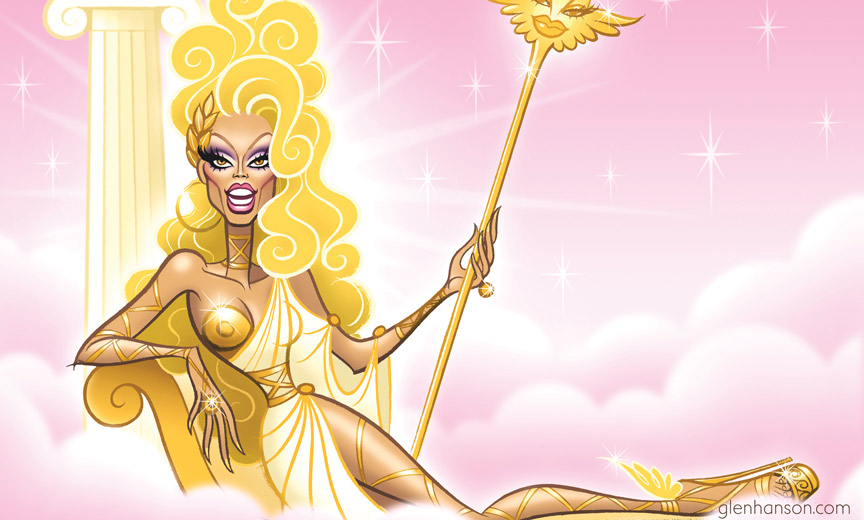 Artist Glen Hanson has delighted the LGBT community with his depictions of some of our favorite icons. but for this gay artist, caricatures are only part of the picture.

Glen Hanson, an artist whose work has captured runway couture and Hollywood celebs, has graced the pages of popular magazines and the covers of beloved books. He’s also helped shape characters on eye-catching animated series and even perked up the packaging of popular fragrances. You may have encountered him without even realizing it via his iconic portrait of the Golden Girls or his sexy drawings of well-muscled men.

But when Metrosource sat down to speak with Hanson about his career, we had to start with his caricatures. Do his subjects ever ask him to give their images a little nip/tuck? He laughs. “Most of the time, people are very happy with what I do, and they don’t ask to be made to look any better — because I make them look better than they do,” says Hanson.

“I don’t seek to belittle people,” Hanson adds. “Even when it’s satirical.” He points to a likeness of Sarah Palin he created. “Now, she’s an attractive woman, so I didn’t make her face look ugly,” he says. “But I did put her in a Nazi uniform.”


Though Hanson takes pride his commissioned pieces, he says: “The things that I’m most proud of are the ones I do for my portfolio because they are pure inspiration.” He’ll be struck by an idea — often because of something that he comes across while browsing the Internet. “I’ll be working at a job, and I’ll pick up another piece of paper, and I’ll just have to do it right there,” he says. This process has resulted in popular works, such as his likeness of Meryl Streep as Miranda Priestly in The Devil Wears Prada.

Does he ever hear back from celebrities about their uncommissioned likenesses? Hanson says that there have been occasions when he learned pieces had found their way to their subjects. “I’ve had some very gracious responses to my work when the celebrities have seen them,” he says. “And I’ve had some very ungracious ones…”

However, it seems that the lion’s share of responses have been appreciative. In particular, Hanson mentions that Mary Tyler Moore and Rosie O’Donnell wrote to thank him personally, and that Lynda Carter retweeted Hanson’s Wonder Woman–themed marriage equality symbol, helping it to go viral. And then there was the summer an image he’d created of Carol Channing led to one of his most exciting celebrity projects yet.

The ultimate answer was a list of performers that truly lived up to the word “icon, including Paula Poundstone, Bruce Vilanch, Margaret Cho, John Waters, Lynda Carter, Chita Rivera and Lorna Luft. There was even to be an evening that paired Justin Vivian Bond and Carol Channing. When he learned that the series was being promoted with a caricature of Channing that he had created, Hanson contacted Nardicio, and Nardicio quickly asked Hanson to create caricatures of the whole line-up. Hanson immediately agreed. “Who wouldn’t wanna draw John Waters and Bruce Vilanch and Margaret Cho?” Hanson says. “Those are gifts: You can’t go wrong with those people.”

Hanson cannot make a living by commissions alone; so he has cultivated a number of outlets for his talents. For example, he has successfully sold his caricature of the cast of The Golden Girls on swag from shirts to mugs to greeting cards. “That image is probably the most popular thing I’ve ever created in my life,” Hanson says, a little ruefully. He adds: “It’s not the best caricature I’ve ever done.”

Hanson’s ambivalence may be related to his concern that this particular image’s success might have less to do with his work than the sheer popularity of the Girls. “There are TV series, particularly two, that have that cross-market appeal from generation to generation — gay, straight, old, young, male, female — I Love Lucy and Golden Girls,” he says. 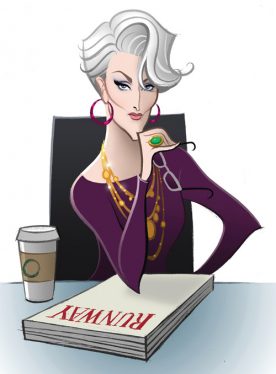 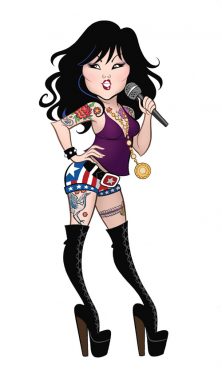 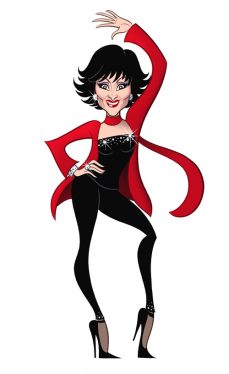 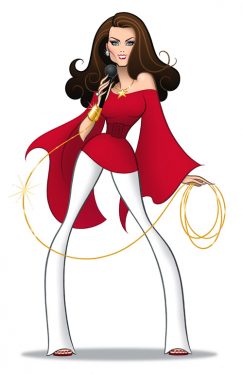 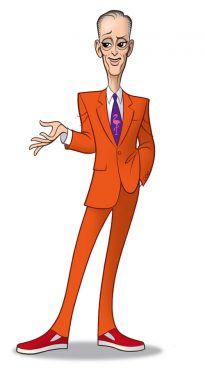 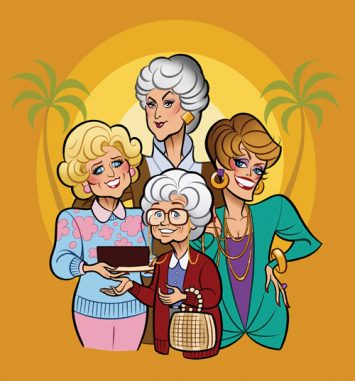 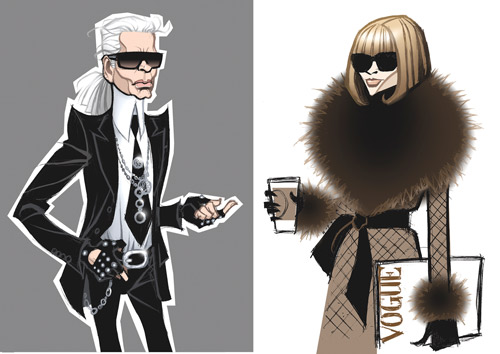 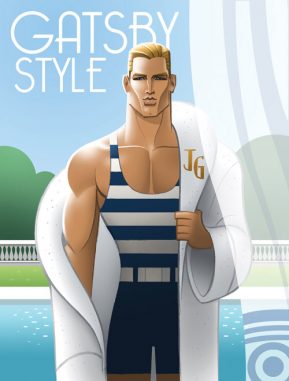 Still, Hanson gets a kick out of how wild people are about the image. “People have tattooed it on themselves, which just blows my mind!” he says. Ellen DeGeneres showcased one such tattoo on her show, although Hanson is quick to note: “I didn’t tattoo it on that person!”

Hanson’s efforts to maintain variety in his work mean that he now connected to some pretty widely varying projects. “For different people I’m a different thing: For [the young adult] market, I’m the guy who does The Goddess Girls,” a series of novels about the students of Mount Olympus Academy, which reinterprets the figures from Greek mythology.

“For the gays, I’m the guy who either did the Golden Girls imagery or the hot guys. … For some people I’m the guy who worked on [animated series such as] Daria and Beetlejuice.” And for fashionistas, he’s the guy who created the images of Karl Lagerfeld and Anna Wintour they saw on those cute tees.

At the time of our conversation, Hanson’s to-do list included moving back to the United States from his native Canada, a potential project involving Palm Springs Modernism Week and upgrading his digital art skills.

At that point, Hanson was mostly drawing by hand and then adding color digitally. But when considering the possibility of going wholly digital, he admitted that it was hard for him to imagine not beginning his creative process on paper: “When I draw something by hand, there’s a magic that happens with pencil and paper that can never be replicated.”

Sadly, he’s noticed it’s a magic that seems less and less appreciated in this increasingly digital world. “People have contacted me [looking] to to buy a print,” he remembered. “I said, ‘Well, you could buy the original; I don’t have a print of it,’ [and they] don’t want the original,” Hanson said, frustrated. “You don’t want something that’s irreplaceable?”

As effective as social media has been as a tool to share his work, Hanson also feared that it has contributed to a certain devaluing of artist-created images. “You have imagery by master like Richard Avedon or any great artist who went to great pains and put incredible technical knowledge and talent into creating images — and those are being tossed out or shared the same way that someone’s picture from a bar last night is,” said Hanson.

“They don’t see any difference between the picture in the bar and something that someone does in high school and something that a professional does. They have no problem asking me to draw them for free,” Hanson continued. “The playing field has been equalized, so that the most talented and the greatest work really has the same value as, you know, a picture of your food … or your cat.“

That said, he was also aware how modern technology has benefited him. “God bless Google,” he says with a laugh. “It’s totally replaced all of the books and magazines I used to have to accumulate for reference.” He said that he envies the tools available to the kids of today who will become the illustrators of tomorrow — even something as commonplace as the ability to press pause. As a kid, he says, “The opportunity to pause a Disney movie and be able to sketch from that would have been heaven for me!”

Visit glenhanson.com to see more of his work and learn how you can have Hanson’s John Waters on a t-shirt, his Divine on a phone case or even his Golden Girls on pillows (and more). You can also follow him on Facebook or on Twitter @GlenHansonNYC.

Originally published in the August/September 2013 issue of Metrosource. 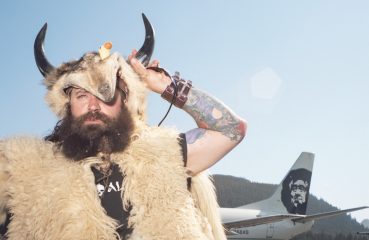 What kind of artists are being celebrated at the tenth anniversary edition of the Month of Photography Los Angeles?... 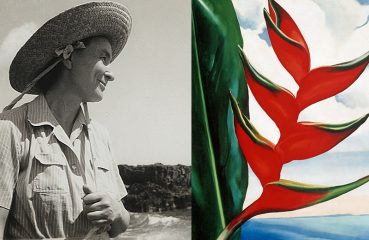 By Theresa Papanikolas | DelMonico Books; $35 The work of Georgia O’Keeffe is easily recognized by its channeling of the female form into all manner of subject matter, and this...