In this Star Trek Cosmos, Sulu 2.0 is Gay

John Cho, who plays Mr. Sulu in the cinematic reboot of the decades-old Star Trek franchise, recently revealed that his character will be a gay dad. In a recent interview, Cho told the press, “I liked the approach, which was not to make a big thing out of it, which is where I hope we are going as a species, to not politicize one’s personal orientations.” The move is widely seen as a nod to George Takei, who played Sulu in the original NBC series which ran from 1966-1969. And to put an even more interesting spin on things, the screenwriter who brings Sulu out of the closet is none other than Simon Pegg, who plays engineer Montgomery Scott, aka Scotty, of “Beam Me Up” meme fame.

It’s also the second big headline made by a movie that’s yet to see release. Star Trek Beyond debuts in U.S. markets July 22. The last headline was the tragic accidental death of young actor Anton Yelchin, who played ensign Chekov in the most recent installments of the series, all overseen by producer J.J. Abrams.

You're Killing Me: Comedy With… An Edge.

If you’ve ever meet a gay guy so shallow and self-obsessed that it made you want to kill him, this is the film for you.... 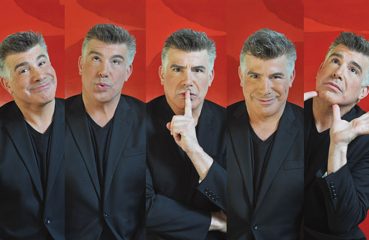 Bryan Batt on Mad Men and His NOLA State of Mind

This prolific performer and writer also has his eye on design....