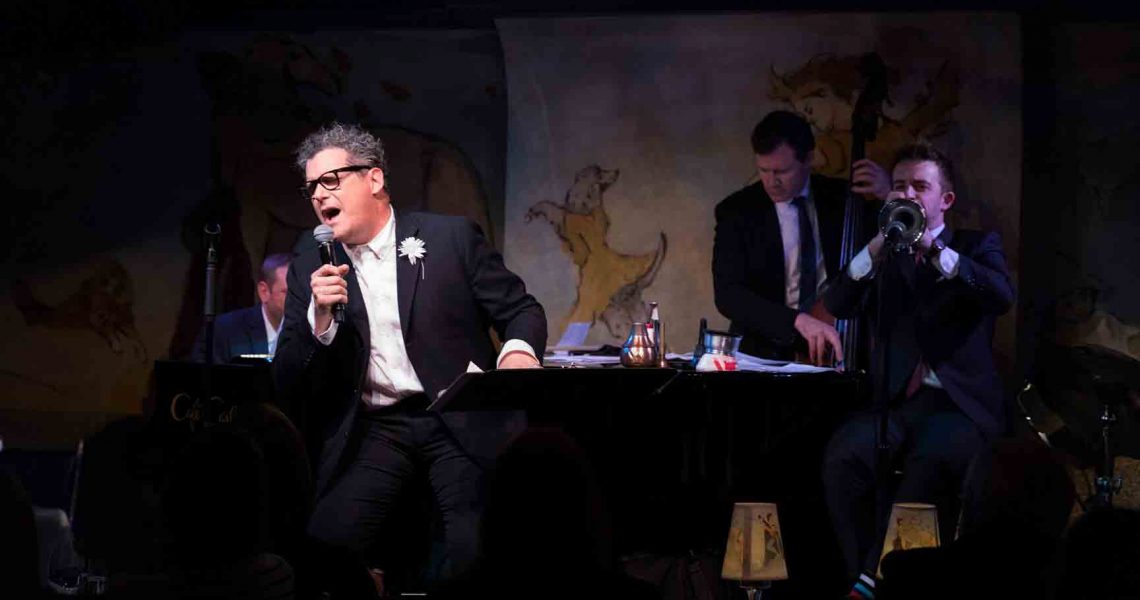 You might well wonder: why is Isaac Mizrahi doing cabaret? But the fashion maven and pop culture darling gave no hints of uncertainty as he bounded to the stage on opening night at the Café Carlyle with infectious energy. He was beautifully dressed — a flower on his lapel, rakishly open french cuffs at his sleeves. And he seemed genuinely excited to join his band, with whom he flirted outrageously throughout the show. “Daniel Freedman,” he said of his percussionist, “the face of a fox, the hands of surgeon, the name… of an accountant.”

But the band, Mizrahi points out, was really “a tale of two Bens.” One was the excellent pianist and musical director Ben Waltzer, with whom Mizrahi is adorably smitten. The other was handsome and wildly talented Benny Benack III on trumpet, who wowed with every solo and whose tender age (27-years-old) allowed Mizrahi many opportunities to riff on the behavioral excesses of millenials. Though Mizrahi noted that the band is wholly straight, he also mentioned reading that “out of every five straight men, two are gay” and raised his eyebrows to indicate he’s still holding out hope.

Judging from their easy laughter, the band got a kick out of Mizrahi’s flirtatiousness, and they ought to be used to it by now. When Mizrahi asked how far they go back, one answered: “to the 20th century.” Another chimed in to say, “20 years.” At this point, explained Mizrahi, “We’re, like, on the same cycle: when one is upset, we all experience sympathetic constipation.”

Mizrahi stage chat was delightfully uncensored on all manner of taboo subjects. He brought up the current climate of powerful men being brought low by sexual indiscretions — suggesting that it’s starting to make all men paranoid: “You see others accused and think, ‘What about the time my hand brushed up against that guy’s penis at the office… accidentally… again and again… until he had an orgasm.” The audience laughed giddily in response. But he also observed that the sexual predator phenomenon is “very straight” in his opinion. “Except for Kevin Spacey, Mario Testino and Bruce Weber,” he qualified. Mizrahi even criticized various attempts at related protests during recent awards shows: the black dresses at the Golden Gloves, the white roses at the Grammy awards. What would really be a better statement? “Everyone should look sh**ty,” Mizrahi suggested 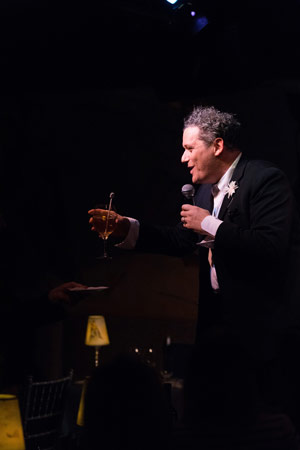 But he had even more intimate details left to reveal: Mizrahi candidly complains about how — as men gain weight — their members end end up seeming smaller. He even mentioned his very sensitive nipples and that in dating profiles people “interested in nipple play” really seem to be interested in nipple torture. After one particularly graphic series of observations, he noted several women scooting toward the exit from their seats near the stage. “I seem to be losing this table,” he said. “Is it because I mentioned my cock?” One leaned back to assure him they were simply bound for the powder room due to copious wine consumption.

On the subject of substances, Mizrahi jovially exhorted the audience: “Cabaret is theater plus liquor — so drink up!” He ordered a rosé spritzer in his first moments on stage and mentioned that — though he had endorsed the value of Xanax Café Carlyle turn last year — he had traded that this year for healthier alternatives like Pilates… and klonopin. Of the latter, he offered the glowing review that one could take some in the afternoon and feel bliss for the rest of the day — so much so that when his own mother-in-law had shared some good news with him recently, he had replied with a klonopin-loosed tongue, “You go, bitch!”

But — in addition to his comedic gifts — Mizrahi had physical gifts to share with the audience. In a popular segment returning from last year, Mizrahi brought a pile of gift bag swag to share with whomever in the audience seemed most jazzed at the possibility of receiving it. “Ooh, me!” audience members crowed in response to Mizrahi’s reals of items as varied as plastic flatware, a sequin-clad wine bottle, an airport-purchased phone cord, sunscreen (“I’m sure it’s expired,” offered Mizrahi), a notebook emblazoned with the phrase “Make Today Ridiculously Amazing”, a technologically-obsolete diskette, and an mask of Oprah Winfrey, which was claimed modeled by trumpeter Benack. “Give a millennial an Oprah mask and they’ll be busy on Instagram for hours,” observed Mizrahi.

And now the moment you’ve all been waiting for: the music. The band (in addition to being very attractive and amenable to Mizrahi’s every flirt) are wonderful — offering rich, jazzy arrangements of an eclectic array of songs. As for Mizrahi, yes, he offer some songs that take advantage of his chatty nature, such as the wacky “A Doodlin’ Song” (which I’ve loved since I first heard Peggy Lee’s version on the soundtrack of Weeds. He also plays lyricist, offering Cole Porter’s “You’re the Top” with updated lyrics, rhyming such superlatives as “You’re Rihanna’s glamor” and “You’re Armie Hammer.” But he also has finely-honed musical instincts, as exhibited in a cool and funky take on Blondie’s “Heart of Glass” — during which the band also offered a series a virtuosic solos. Most importantly, when Mizrahi challenges himself, he has some impressively huge notes waiting to burst out on big numbers like “I’ll Plant My Own Tree” from Valley of the Dolls and “Don’t Rain on My Parade” from Funny Girl. 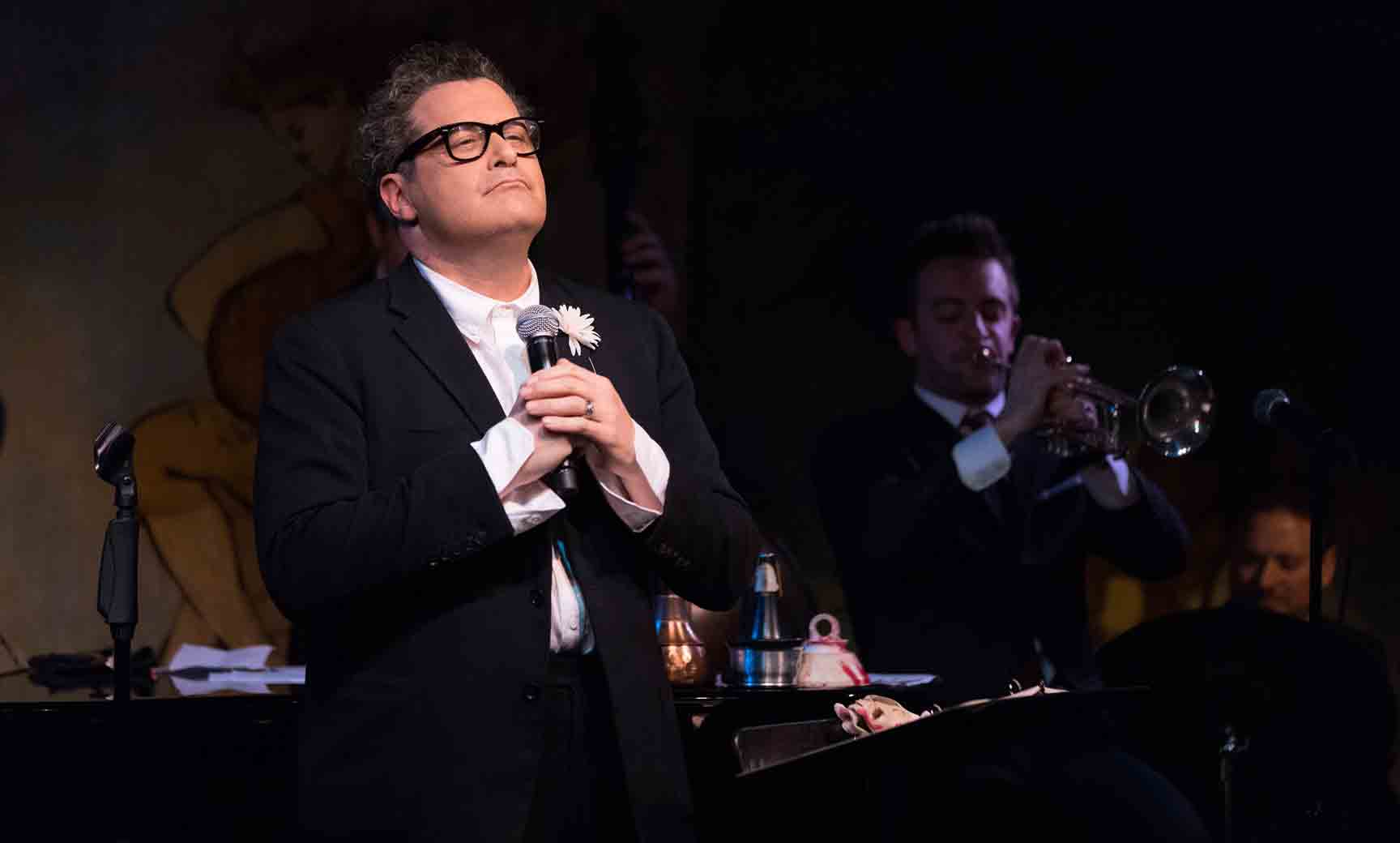 But among all the blue humor and celebrity dish, the loving band-ribbing and the varied vocal performances, there are also a few moments of genuine emotion. It’s lovely to enjoy Mizrahi watching the musicians — as Waltzer’s fingers dance across the keys or Benack coaxes astonishing sounds from his trumpet — with what can only be described as genuine wonder. And in the middle of the show, he offered a sweet, heartfelt performance of a piece entitled “My Song” by Labi Siffre, whom Mizrahi describes as “a gay songwriter back at a time when sissy men were edgy.”

The lyrics of “My Song” include the passage, “I may not always sing in tune / And sometimes you don’t hear me / But you don’t have to be near me / to know that I’m singing.” It struck me as a powerful parallel for Mizrahi’s performance. It’s not about whether he’s got the most pitch-perfect pipes to ever grace the hallowed Café Carlyle stage. It’s that with every joke, every story, each aside to the audience and each shimmy of his shoulders — he’s wonderfully entertaining and joyously present. Whatever else he may be doing, you know that Isaac Mizrahi is always singing.

For tickets to Isaac Mizrahi: Moderate to Severe — Tuesday January 30 through Saturday February 10 at the Café Carlyle — call 212.744.1600 or visit them online. 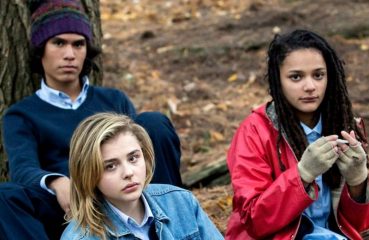 A new feature that illustrates the harm caused by gay conversion therapy has won the grand jury prize at this year’s Sundance Film Festival. Chloë Grace Moretz plays the... 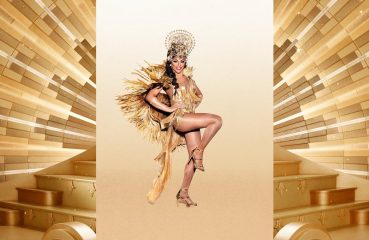 An Angel With An Agenda: Say Halleloo to “RuPaul” Queen Shangela

You can’t keep a good queen down, you know. Even if she’s been tossed off the Drag Isle of RuPaul Island two times before already. Gurl has a plan this time....