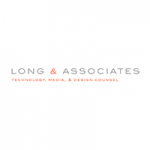 To make legal matters as easy, cost effective, and pleasurable as possible to deal with. Our laid back but quietly effective attorneys have been partnering with clients for over 10 years to craft original and yet potent solutions to legal problems. As a result, we are a trusted advisor to the technology, media, and design industries.

At Long & Associates, we prioritize classic advising and problem solving over billable hours. We believe quickly solving a client's problem with powerful remedies at workable rates, or by encouraging collaborative problem solving with their adversaries, is the best way to develop not only a sustainable relationship with the client, but also a long lasting reputation. In addition, we provide clients with holistic advising which takes into account the short and long-term non-legal consequences of their actions. These have included the risk of a foreign government's extrajudicial retribution, leaks to the press, credit rating problems, and armed conflict.

In order to best serve our East and West Coast clients, our offices are conveniently located in New York and Los Angeles. Our New York office is in the city's famed Flat Iron district, which is often referred to as "Silicon Alley." Similarly, our Los Angeles office is nestled between in between downtown's high rises.

Technology companies in the software, hardware, and web development industries rely on our intellectual property expertise in order to protect and license their technological works. To do so, we often draft and negotiate software licensing, non-disclosure, and employment or subcontractor agreements with work-for-hire, non-compete, and non-solicitation provisions.

In addition, we have litigated various claims, including copyright, antitrust, and breach of licensing agreement on behalf of our clients in federal and state courts at the trial and appellate levels. Such representation has included responding to cease and desist letters, filing antitrust counterclaims, and resolution of arbitration claims.

Representative clients in this industry have included:

Since our inception in 2006, we have been representing award winning media & entertainment clients with their intellectual property, litigation, and corporate matters. Whether it's an external dispute with a vendor, or an internal conflict with a partner, we have for more than ten years been by our media & entertainment clients side to quickly resolve problems as efficiently as possible and within the budget we set for the client.

More recently, for example, we successfully settled a contentious dispute between actor Mr. Edward Burns, who starred in Saving Private Ryan, and one of his vendors in New York after filing an answer and counterclaims alleging fraud, among other things. Other clients in this industry have included:

Members of our legal team have represented fashion designers who are members of the Council of Fashion Designers of America ("CFDA") and/or who have won the coveted Ecco Domani© Fashion Foundation award, in addition to burgeoning and established fashion houses.

Among other things, attorneys of the firm have: registered trademarks and negotiated several contracts for CFDA designer Mr. Donald Deal, who is carried by Neiman Marcus and has dressed the likes of Sharon Stone and Barbara Walters; negotiated a favorable commercial lease for Mr. Richard Chai, the 2005 winner of the Ecco Domani© Fashion Foundation award; registered trademarks for Emma Fox Leatherware, L.L.C., a burgeoning purse design company; advised Industrias Integratas, a Colombian based apparel manufacturer, concerning the company's contractual rights against a New Jersey textile broker; and successfully dismissed a breach of contract complaint brought against Danielle Nicole, Inc., an emerging purse design company.