All the Reasons Why LGBTQ Tourists Need to See Lyon 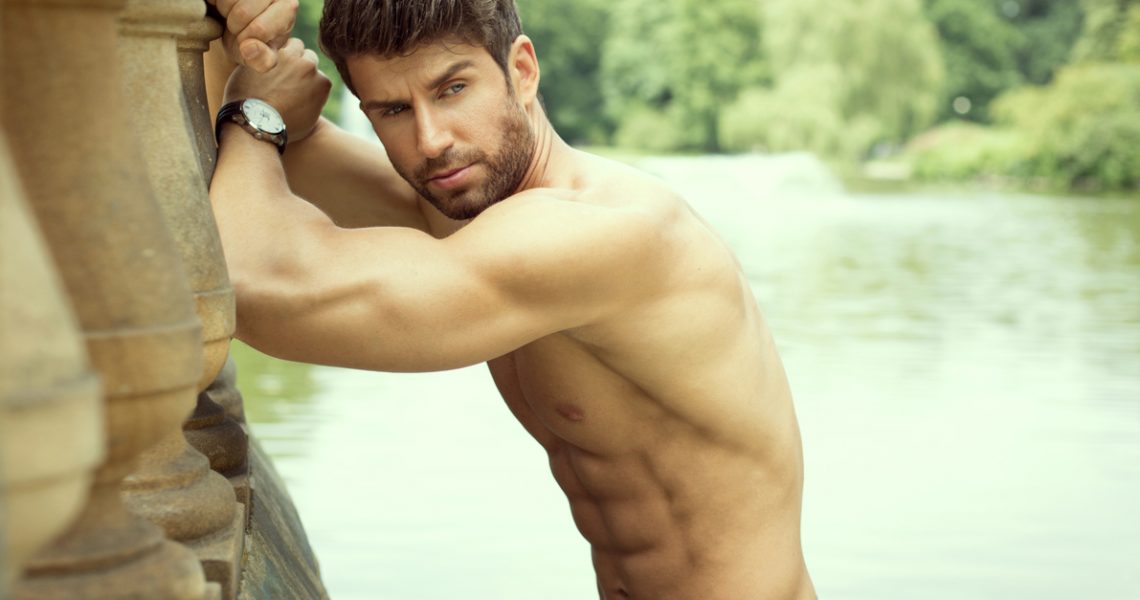 In Lyon, there is a street named for Sister Bouvier, who delivered more than 100,000 babies during her decades-long tenure as a member of the hospital order at Hôtel-Dieu (or “hostel of God”). One of the most historic buildings in France, Hôtel-Dieu de Lyon was the spot where nearly two-thirds of all Lyonnais were born. It’s an imposing structure along the Rhône with a 1,300-foot façade built by Soufflot, the architect who designed the Pantheon in Paris.

For more than 800 years, this magnificent structure has been a symbol of Lyon’s beneficence — first as a refuge for travelers and clergy in the 12th century and later for ex-prostitutes who, once they were coaxed off the streets by priests, formed the hospital’s nursing staff. What a testament to Lyonnais humanity: to be delivered into the world by former street-walking ladies of the night.

Much of this rich history is evident throughout Grand Hôtel-Dieu, a brand-new hospitality and gastronomic complex that has transformed Lyon’s premier hospital into a dynamic center of luxury and well-being. Medicinal plants and botanical herbs bloom throughout the cloister gardens and courtyards. They now house restaurants and lounges such as Buddha Bar and L’Officine, as well as the five-star InterContinental Lyon-Hotel Dieu. In a nod to the historic hospital’s fabled 70-ingredient theriaca (a cure-all panacea comprised primarily of opium poppies), the apothecaries fronting the Rhône in Soufflot’s original 18th century design are now boutiques devoted to 21st century health and wellness.

Read Next | This is Why LGBT Tourists Adore Amsterdam 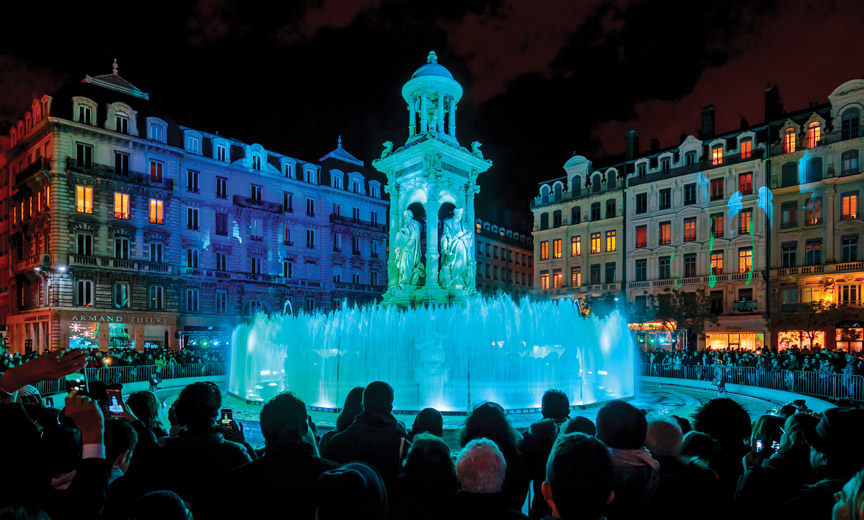 (Place des Jacobins image by Brice Robert for Only Lyon)

Nestled in the heart of Lyon’s UNESCO World Heritage Site, Grand Hôtel-Dieu is also home to Lyon’s Cité Internationale de la Gastronomie: an interactive laboratory that focuses on food as a source of both pleasure and health. Designated “the world capital of gastronomy” by the famed 19th century French food author Curnonsky, Lyon remains the spiritual home of Paul Bocuse, the beloved chef of chefs whose nouvelle cuisine revolutionized French cuisine with its focus on lighter, seasonal fare. And it was “Monsieur Paul” (as he’s affectionately known throughout the city) who founded the Bocuse d’Or, Lyon’s biennial cooking competition that has become the gastronomic equivalent of the World Cup.

In part, Lyon’s culinary prowess is a consequence of its optimal location at the confluence of the Rhône and Saône rivers where it is surrounded by several illustrious wine regions, including Beaujolais and Côte du Rhône AOC. Even during the Middle Ages, spiritual travelers would attest to Lyon’s gastronomic excellence, which is reflected today in the city’s 23 Michelin stars and a staggering 4,000 restaurants. Beloved for its bouchons (cozy inns serving the traditional Lyonnais cuisine often associated with grandmothers), Lyon has been cited by UNESCO for its rich foodie heritage. At Le Bistrot d’Abel, one of the city-certified Les Bouchons Lyonnais, guests can descend into a Proustian reverie induced by French comfort food such as pâté en croûte and pillowy quenelles, followed by baba au rhum.

Amidst such plenitude, it’s relatively easy to succumb to gluttony —particularly when confronted with a buffet laden with Lyon’s signature tartes aux pralines: rose-colored almond confections that melt in the mouth like cotton candy. Equally addictive are the regional cheeses and oysters shucked by the bushel at Halles de Lyon-Paul Bocuse. Home to more than 50 purveyors of Lyonnais delicacies, the market first opened in 1859 and has remained Lyon’s culinary centerpiece. Both locals and visitors commingle around the comptoir to sip and slurp side by side.

Further gastronomic temptations await at Le Grand Réfectoire, housed in the former refectory of the sisters of the hospital —complete with the pulpit from which the mother superior read aloud from her Bible during the sisters’ silent meals. Certainly those times have changed and the spectacular vault-ceilinged room now thrums with energy behind the guidance of Michelin-starred chef Marcel Ravin, who complements traditional Lyonnais cuisine with indigenous ingredients from his native Martinique.

Yet even in the face of overindulgence, Lyon retains its reputation for health and well-being. Bicycles are as abundant as baguettes — with more than 4,000 shareable Vélo’v bikes available for traversing the city’s 300 miles of cycling routes. At Tête d’Or Park, which flanks the city’s contemporary art museum (known as MAC), nearly 400 acres of verdant meadows and rose gardens surround a vast 40-acre boating lake. Redeveloped river banks provide endless enclaves of relaxation with barge restaurants and floating bars that morph into moon-kissed clubs. 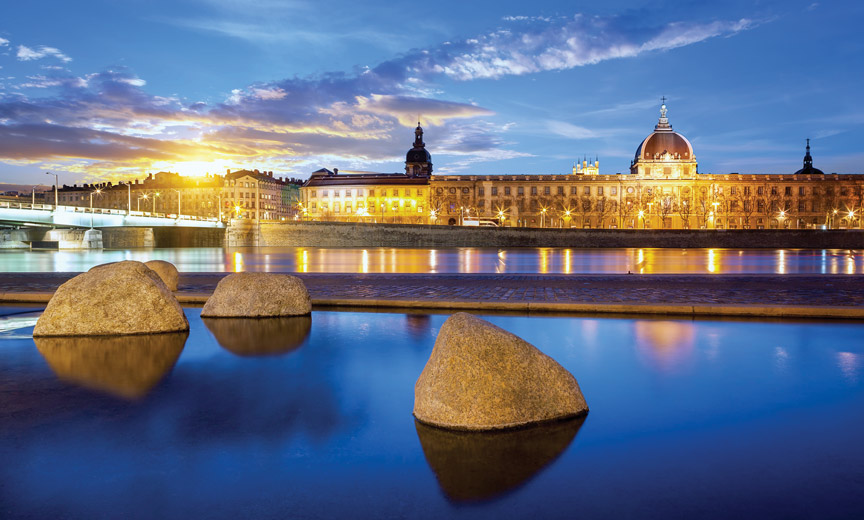 Maybe it’s something in the water, but innovation has been an integral part of the city’s reputation since Lyon’s dominance of the silk industry began in the 16th century. It is to Lyon that we trace the development of the Jacquard weaving loom, which is considered a forerunner to the computer. At the former Hôtel-Dieu, the Lumière brothers also pioneered the use of X-rays to treat cancer. And fun fact: the local duo also invented modern cinema and color photography.

Equally inventive is the city’s annual light festival known as Fête des Lumières, which illuminates the city with such a glow that French astronauts photograph it from the international space station. More than 30 international artists create scores of spellbinding installations throughout the city’s squares and parks. As Lyon Mayor Gérard Collomb states, “Few events are better positioned than Fête des Lumières, with its universal symbol of light, to showcase the soul of Lyon: its values of unity, sharing and solidarity.”

In keeping with the city’s sense of inclusiveness, Lyon hosts various annual LGBTQ events, including France’s second-largest Pride Parade each June. The event concludes with a massive festival on Place Bellecour, the largest pedestrian square in Europe. Biennial de la Danse occurs in September. In October, that’s followed by Lumière Festival, a celebration of film curated by the Institut Lumière with nearly 200 offerings shown on screens throughout the city. 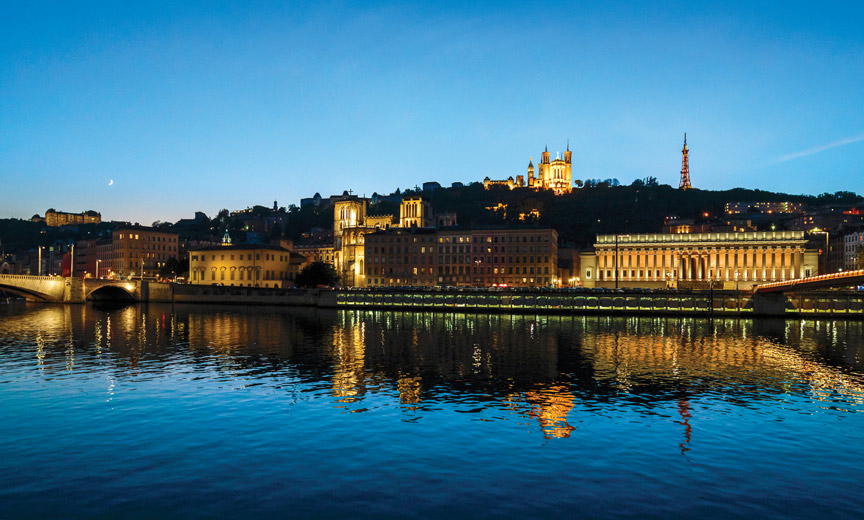 Often listed as one of the world’s most livable cities, Lyon is home to no less than 29 bridges which straddle the rivers and make the city one of the most pedestrian-friendly in Europe. At Okko Hotels Lyon Pont Lafayette, premium rooms front onto the Rhône, with sweeping skywide vistas that lend veracity to the hotel’s tagline: Four stars and no clouds.

Behind the hotel’s traditional 19th century Haussmann façade exists a sleekly urbane all-inclusive property that functions as a private club for guests, complete with a lounge and living spaces that are impeccably outfitted for 21st-century comfort. In the evenings, an Italian-style apéritivo is served with a focus on local products and regional wines. By that point, you’ll have plenty of reasons to toast l’art de vivre in Lyon. And you can always bike away that butter tomorrow. 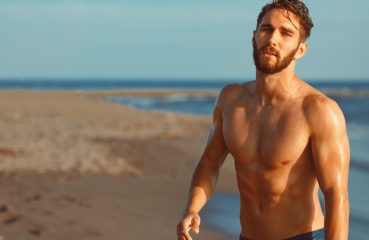 These Are Beaches Where You Can Sun Tan with the Stars

If you knew how to travel like the rich and famous, why would you do it any other way? Though certain A-list troublemakers (we’re looking at you, Lindsay Lohan and Amanda Bynes)... 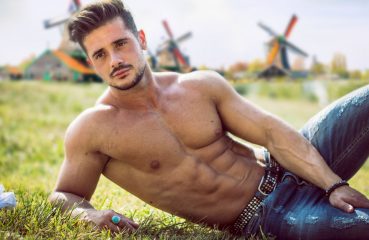 This is Why Tourists Adore Gay Amsterdam

Back in the 1980s, Amsterdam was the Sin City of Europe. it was the city where my boyfriend and I traveled whenever we needed respite from the Bible-bleating hegemony of the...