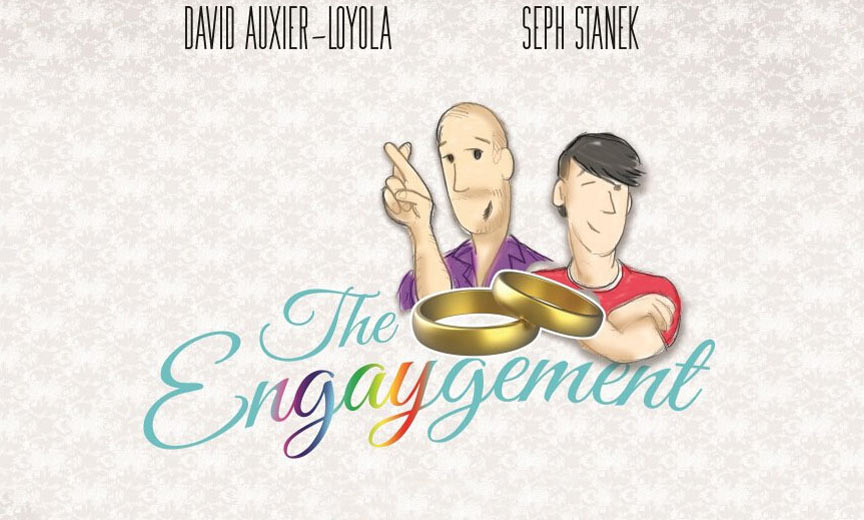 When it comes to his knowledge of musicals, Nobody Does It Better than our editor. Here’s his assessment of something still in gestation: Engaygement.

Late in 2015, Cynthia Nixon helmed a production of a play called Steve, which was about the lives and loves of people brought together by the piano bar scene. I was very happy with the fact that its pre-show was very much a recreation of a classic night at a piano bar. However, once the play commenced, it was really more a drama about infidelity and loss that could have taken place in any corner of the gay community — though soaked with more sassy musical theater references than Leonard Bernstein could shake a baton at.

What was missing from that particular story about musical-lovers was the music; in allowing its song-loving characters to actually sing about their emotions The EnGAYgment ends up a more perfectly pitched portrayal of piano bar people. Described by creator David Auxier-Loyola as a “sort-of-semi-autobiographical story of two men who meet in New York and, despite their own best efforts to self sabotage, manage to build a life together,” this is decidedly not a play about the struggle for marriage equality. It just happens to be a gay love story in a world where a gay love story’s happy ending can now be legally-recognized marriage.

The EnGAYgment is at its best when the most people are singing. Auxier-Loyola has a gift for creating interesting dynamics as lyrics and melodies bounce back-and-forth, textured by the way they overlap or combine in harmony. The opening number about “Just Another Night” in a gay bar thrusts its characters into the action of the play with all the verve of Sondheim ushering his mismitched lovers into Act Two of A Little Night Music with “A Weekend in the Country.” Later in the play, a musical ode to Fire Island sung by the ensemble is so beautiful that the Island should seriously consider licensing it as an official theme tune.

These high points are found among a light-but-engaging courtship story. Auxier-Loyola and Seph Stanek are well-matched as the kind of lovers who might ask “What did I ever do to deserve you?” out of joy or frustration. Their characters can be forgiven for a tendency to confessionally sing their conflicted inner monologues to one another or directly to the audience as they do so beautifully and with great feeling. This results in some truly relatable moments; e.g. who hasn’t — when feeling their worst — looked at their lover and wondered: “How long are you going to be able to stand me like this?” Comic relief arrives in the form of Chis-Ian Sanchez, who mugs with infectious glee, and Elliott Mattox, whose wry delivery of “A Piano Bar Confession” — a song about not being that interested in the guy you’ve been talking to at a bar — is a scene-stealing stand-out. Meanwhile, Colleen Harris and Jason Whitfield play the show’s resident heterosexuals: She’s a gal who loves her gays, and he’s her adorable husband — greeting his wife’s coterie of queer pals with the overenthusiasm of a happy puppy. Their big duet “Fight It Out” is a delightfully
Avenue Q-esque inversion of classic romantic advice numbers that more typically would advocate kissing and making up. Plus, Colleen gets a big 11 o’clock number (“Realistic Me”), which she delivers with Mama Rose brassiness.

In his notes on the show, Auxier-Loyola describes The EnGAYgment as “a new musical”, “a work-in-progress”, “a script in its babyhood” and “a workshop of sorts,” but he needn’t apologize for a project that already shows not merely promise but polish. The characters and situations offer keen observations about the insecurities of gay men, the intricate mores of piano bars, and the kind of complex relationships in which you can end up in fights where both partners are a little bit right and a little bit wrong.

Though it has some tense and emotional moments, the overall spirit of The EnGaygement is as bubbly as the best wedding champagne toasts. Though one can easily picture an expanded staging in a more traditional theater space, the show’s profusion of jokes and ribald lyrics make it a lovely fit for the supper-club vibe of its current berth at The Metropolitan Room (where its last scheduled performance is June 22, 2016). And, enjoyable as it is now, this iteration of The EnGAYgment certainly proves that Auxier-Loyola should have the chance to continue — to not only develop this piece but to also to put his talents to use exploring other engaging stories. The EnGaygment features Music Direction and Arrangements by Mark York and direction by Duncan Pflaster. You can learn more about David Auxier-Loyola at davidauxier.com and purchase tickets to The EnGAYgment at metropolitanroom.com.

After the week we’ve had, we could all use a moment of levity. Watch as this 8th grader’s on-point impressions of Trump, Cruz, Obama, Clinton and Sanders wow the...