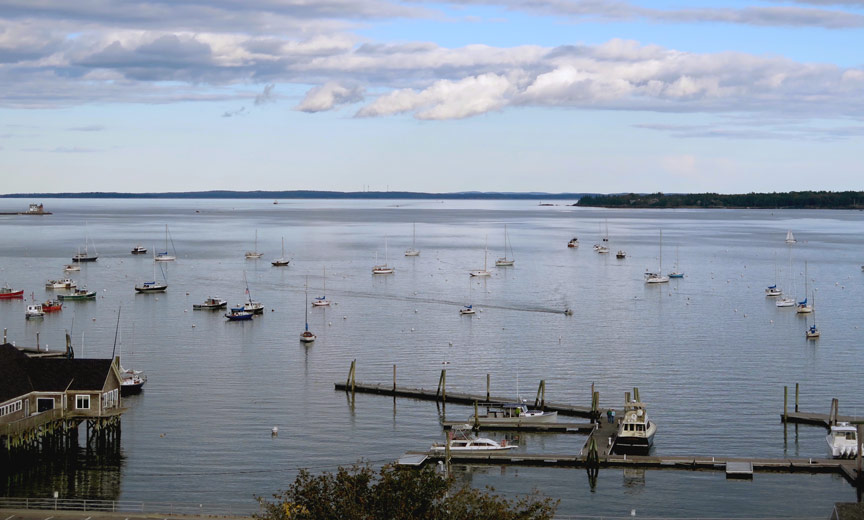 From its spectacular shorelines to its succulent seafood, Maine beckons artists and visitors to the Northeast.

As you gaze out at the rugged Maine coast from a window at Higgins Beach Inn (higginsbeachinn.com), you might feel as if you’ve been enveloped by an Edward Hopper painting. The three-story clapboard structure has been welcoming guests for nearly 100 years, and it’s easy to imagine Hopper conjuring the image of a lone woman at a window, curtains billowing around her in the sea breeze, while a gentleman reads a newspaper on the wraparound porch.

For generations, artists have been migrating to Maine, attracted by its primal landscape on the eastern edge of America. At a time when much of the nation faced west, visual artists such as Winslow Homer, Marsden Hartley, and N.C. Wyeth focused on Maine’s craggy terrain and 5,000-mile coastline. The seasonal influx of painters and sculptors created a veritable artists’ community throughout a state that has been known as “Vacationland” since the railroad first connected Maine to the Canadian Maritimes in the 1890s. Though the railroads were supplanted by automobiles, the Vacationland nickname has adorned Maine’s license plates for more than 80 years.

Yet Maine is far more than the lobster rolls and L.L.Bean for which it’s known. About Manhattan, it was once said: “There are eight million stories in the naked city;” similarly, Maine harbors a thousand tales behind its formidable façade. Going back to my childhood, Maine existed in my mind as home to talking pig Wilbur and his arachnid friend Charlotte, the protagonists of Charlotte’s Web, written by longtime New Yorker E.B. White — who ultimately exchanged Manhattan for the small town lifestyle of Brooklin, Maine.

The Art of Maine

So many artists of all genres have flocked to Maine that the state offers a Maine Art Museum Trail (maineartmuseums.org), highlighting seven art museums with more than 73,000 works of art that tell the story of Maine through various media. The subject of a recent exhibition at Colby College Museum of Art (colby.edu/museum) — not to mention New York’s Met Breuer — Maine-born artist Marsden Hartley found his subjects along the beaches or (as he wrote to a friend) “went down into the bowels of the Y.M.C.A. and pulled up this ‘true beaut’… Well, the model is a wonder and we are quiet friends now…” Few would dispute Hartley’s taste upon seeing Canuck Yankee Lumberjack at Old Orchard Beach, Maine — featuring a very well-built man standing at the shoreline sporting some rather brief bathing attire.

With two world class museums and a main street lined with galleries, the town of Rockland likely holds more artwork per capita than most American cities. While most visitors might recognize Rockland for its annual Maine Lobster Festival (mainelobsterfestival.com) which attracts enough visitors to polish off more than 20,000 pounds of lobster, the town is also home to the Farnsworth Art Museum (farnsworthmuseum.org) crowned by artist Robert Indiana’s instantly recognizable neon EAT sign first installed at the New York World’s Fair in 1964. Noted for one of the nation’s largest collections of works by local sculptor Louise Nevelson, the Farnsworth also includes the Wyeth Center with its collection of works created by three generations of the first family of Maine artists, the Wyeths.

Rockland’s cultural scene received a shot of architectural adrenaline with the 2016 debut of Toshiko Mori’s breathtaking new home for the Center for Maine Contemporary Art or CMCA (cmcanow.org). As artist Alex Katz has stated, CMCA’s glass-enclosed space with its sawtooth roofline and open courtyard is a “game-changer for Maine art.” Adjacent to Rockland’s restored historic Strand Theatre (rocklandstrand.com), CMCA welcomes exhibitions that feature artists with connections to Maine, such as Linden Frederick whose nocturnal paintings of Belfast, Maine have fostered comparisons to Edward Hopper. Their exhibition Night Stories pairs 15 paintings to a series of short stories written by 15 award-winning American writers, including Ann Patchett and Richard Russo.

The Taste of the Sea

Though for bibliophiles, the idea of farm-to-table Maine cuisine might conjure unfortunate images of Charlotte’s Web characters on a plate, a visit to Rockland’s award-winning restaurant Primo (primorestaurant.com) will banish any guilt related to the idea of dining on Wilbur. Chef and proprietor Melissa Kelly has been delighting gourmands for more than 17 years from her Victorian farmhouse located atop a hill surrounded by four acres of gardens, greenhouses and livestock. With a porch, a parlor room and various lounges, the genteel restaurant exudes a gracious atmosphere complemented by polished service. Kelly and her staff work wonders with their wood-burning oven, offering fresh, seasonal food that opens both the senses and the memory, recalling some of the best meals that have touched your palate — or your heart.

Visitors who dine at Primo find their way to 250 Main Hotel (250mainhotel.com) — and vice versa — as both restaurant and hotel are the new standard bearers of Rockland’s refined hospitality. Originally conceived as luxury housing and designed to evoke the view from a yacht, 250 Main opened in 2016 as a 26-room boutique hotel overlooking Rockland Harbor. With curated artwork displayed throughout the five-story structure, the hotel doubles as a high-end art gallery and design showroom — albeit without pretense from the smartly-attired and amiable staff.

Furnished with contemporary Italian seating, the hotel’s lobby hosts an afternoon wine social, in addition to a daily breakfast (with breakfast trays, should you wish to wake and surprise your spouse with breakfast in bed — and yes, I did). From the roof deck, panoramic views of Rockland’s waterfront and shipyards sprawl out for miles, reaching the neighboring isles of North Haven and Vinalhaven shimmering in the distance. Equally inspiring is bedroom wallpaper printed with Shakespearean quotes, such as “The world’s mine oyster…” 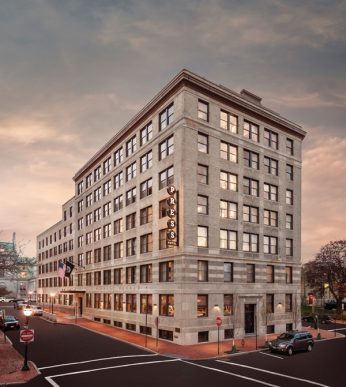 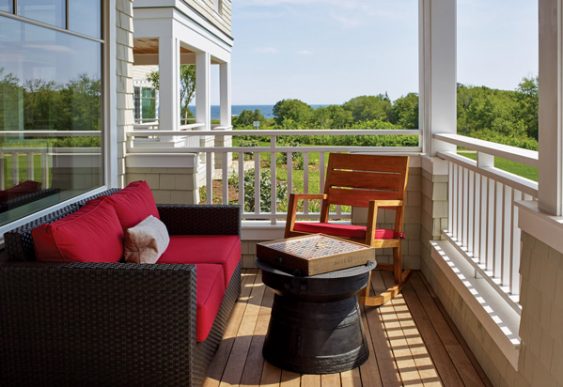 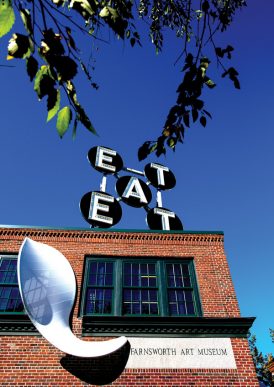 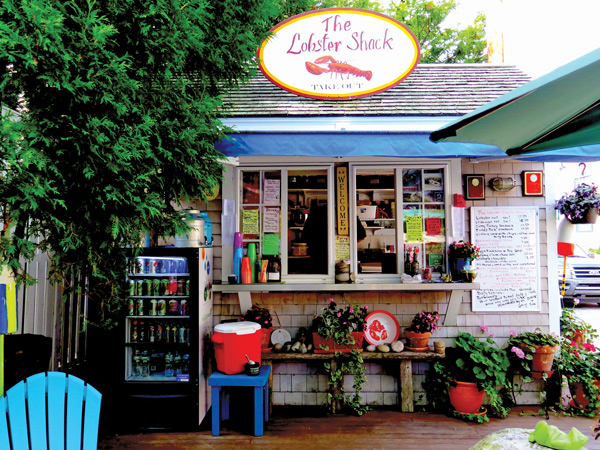 The Lobster Shack in Rockland 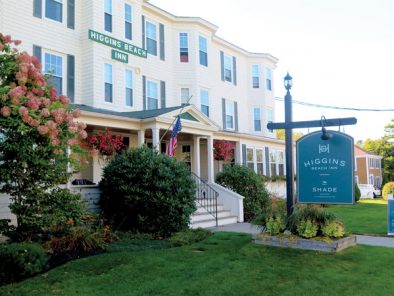 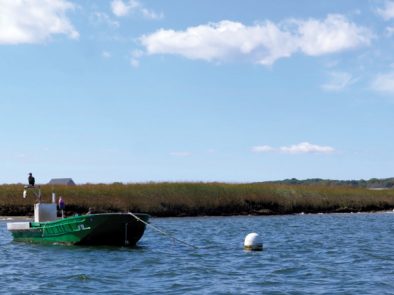 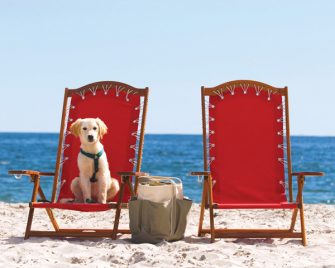 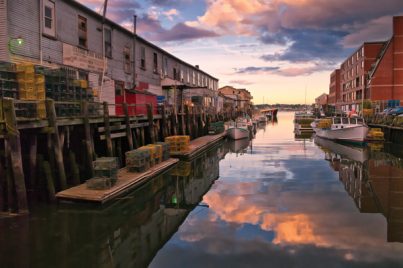 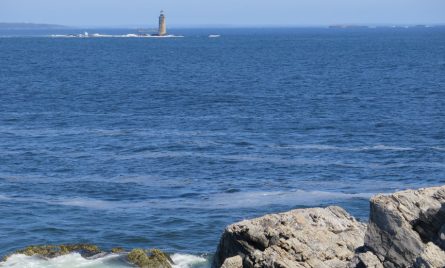 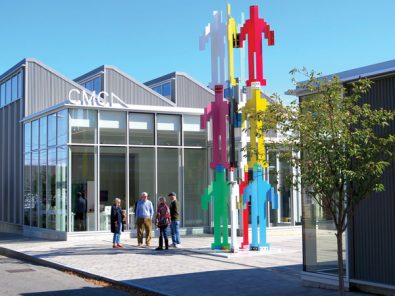 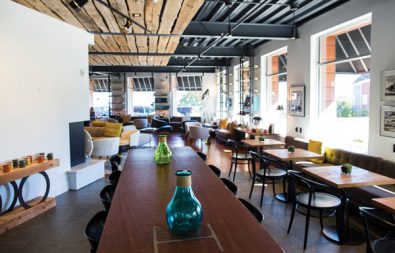 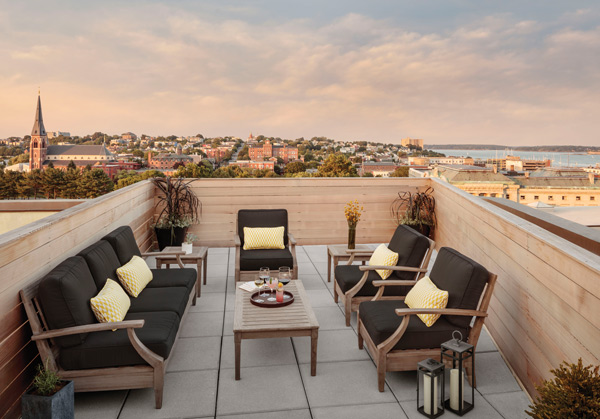 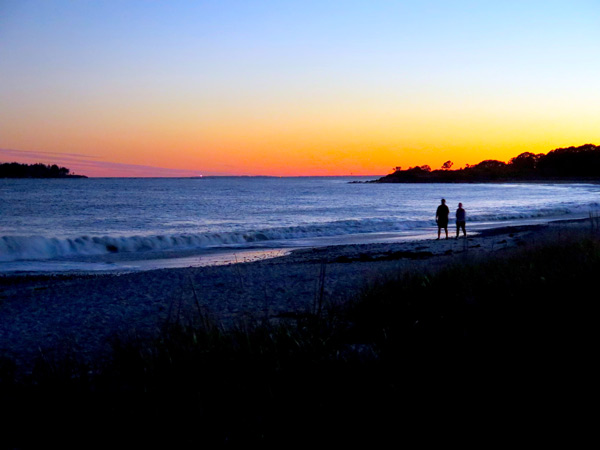 Speaking of seafood, Mainers are passionate about where to find the best lobster roll, and few would dispute that Rockland’s Lobster Shack (facebook.com/thelobstershack04841) offers one of the best — accompanied by pickled green beans, chowder and a tangy slaw. Equally well-loved is the funky and fun Café Miranda (cafemiranda.com) which has been serving multi-cultural comfort food from its wood-fired oven for more than 20 years.

Rooms with a View

Another of Maine’s top attractions is its spellbinding landscape, which is beautifully showcased at the 295-acre Coastal Maine Botanical Gardens (mainegardens.org). Situated along the tidal shore in Boothbay, the gardens were founded in 1992 by a group of mid-coast Maine residents; a quarter century later, New England’s largest botanical garden blooms as a quiet testament to the power of grassroots organization.

Indigenous flora is also celebrated at Inn by the Sea (innbythesea.com), which boasts five acres of seaside gardens flanking Crescent Beach State Park. Located a short drive from Portland in Cape Elizabeth, the luxury waterfront resort features 61 rooms, suites and cottages with modern interiors, as well as Sea Glass, the award-winning restaurant that serves a lobster tasting menu as well as sustainable seafood recommended by the Gulf of Maine Research Institute. Beachfront sunsets are followed by cocktails around an open fire pit—and those who partake of an after-dinner stroll along the shore might find themselves accompanied by the resort’s beloved spirit bride — the friendly ghost of a 19th-century bride-to-be who drowned with her bridesmaids during a storm off Crescent Beach.

For another take on Maine hospitality, head south to Scarborough Beach where the hipster vibe of the restored Higgins Beach Inn (higginsbeachinn.com) melds with the beach’s history as a surfer sanctuary. A part of the Maine-based Migis Hotel Group, which also operates 250 Main), the historic inn retains its classic New England ambiance, albeit with an additional frisson of bohemian chic. Think coral pink wicker chairs with vintage vacation posters hanging from pine board walls. Breakfast is served on the covered porch; in the evenings, locals gather at Shade, the inn’s restaurant, for cocktails, craft brews, and dozens of free-range oysters fresh from the estuary.

Heaven on the Halfshell

While its lobster leaves an impression, Maine oysters are equally memorable, particularly when eaten on an oyster tasting tour with Abigail Carroll. In 2010, after her life in Paris required a reboot, Carroll founded Nonesuch Oysters (nonesuchoysters.com), a seven-acre oyster farm in a nature conservancy on the Nonesuch River. Known as the “accidental oyster farmer,” Carroll has become a passionate steward of the Scarborough estuary and her boutique oysters are reflective of their aqua “terroir” with a balance of brine and sweetness marked by notes of seagrass. A committed environmentalist, Carroll also utilizes locally harvested Maine marine ingredients for Nonesuch Skincare, her line of natural beauty and health products.

Numerous oyster farms populate the coast of Maine, as well as nearly 200 marine farms. Mussel farming has been a part of Maine’s maritime economy since the 1970s and Maine is at the vanguard of sea vegetable production, thanks to an abundance of wild, nutrient-packed seaweeds such as kelp, dulse and alaria.

Each October for the past ten years, gourmands head to Portland for Harvest on the Harbor (harvestontheharbor.com), Maine’s premier food and wine festival. Dedicated to both ending childhood hunger in Maine and showcasing Portland’s culinary bounty, the festival offers a mouth-watering introduction to Maine’s largest metropolitan area.

Located 90 miles north of Boston, Greater Portland is a vibrant mélange of towns and islands with roots going back to 1633. At EVO Kitchen + Bar (evoportland.com), Chef Matt Ginn utilizes his locale near Portland’s Old Port to procure the best local Maine produce, which he then flavors with seductive touch of the Mediterranean.

One of the best places to absorb Portland’s casual cosmo vibe is the Press Hotel (thepresshotel.com), the erstwhile home of Portland Press Herald, Maine’s largest newspaper. A member of Autograph Collection, the hotel honors its ink-and-paper antecedents with an installation of vintage typewriters and letterpress sculptures, while guest rooms evoke editors’ offices from classic film noir. Reporters’ notebooks are also available should you overhear an inside scoop while sipping a classic cocktail at Inkwell bar.

At Union (unionportland.com), the hotel’s locavore restaurant helmed by Maine native Josh Berry, the knowledgeable staff offers insider tips about the best from the open kitchen, which focuses on local purveyors. Consider the braised Maine lobster for dinner—followed by a vanilla brioche pain perdu at breakfast, both of which remind you why Maine is synonymous with eating.

The longer you linger in Maine, the better you understand why artists have returned year after year. Portland Museum of Art (portlandmuseum.org) founded by artists in 1882 — houses an extensive collection of 19th- and 20th-century works showcased in two heritage buildings conjoined with a contemporary addition. The museum also oversees Winslow Homer’s studio in nearby Prouts Neck, where visitors can wander along the coast that inspired his timeless representations of Maine’s rugged beauty. For as his work states — along with those who came before or have followed since — at its most elemental, the Maine Thing is inspiration.