There isn’t another place on Earth like Lourdes, France. For the deeply religious, it’s a pilgrimage; for the rest of us, it’s a repository of singular art relics. Ever since I was a young boy, I’ve heard my mother talk about her dream of visiting Lourdes. She’s a devout Catholic, and knew the area to be one of the most attractive towns in the Mid-Pyrénées region of southwest France.

Here, you can visit Sanctuaries Notre-Dame de Lourdes, the site of the grotto where the Virgin Mary appeared to St. Bernadette in 1858. You can spend time contemplating the our Lady of Lourdes Shrine, the birthplace of St. Bernadette – and her family home during the time of the apparitions. And in the evening, you can join the solemn and graceful rosary and candlelight procession that continues to attract millions of people each year. Not long ago, I happened to be doing a story about the wine region in the South of France and the beaches of Barcelona. Although I am not personally religious, I planned on dropping by for a half hour or so to visit the area we had studied in the private Catholic school I attended (and to purchase a rosary for my Mother, who I knew would find it special). From Bordeaux, Lourdes was a two and a half hour drive on a perfectly sunny day and being on on a tight schedule, I was determined to stay no more than 30 minutes. But the minute I arrived, I was mesmerized by its charm. Lourdes is a quaint little town with a population of just over 20,000 – although there tend to be fewer for the colder months of winter. In all honesty, I was expecting the town to be touristy and chaotic, but I was immediately taken aback before I even got out of my car.

Certainly there were a lot of people when I arrived. I went in the middle of summer and the place was as full of tourists as Disneyland during Spring Break. But it was organized and also very fascinating. I was pleasantly surprised how there could be so many people from every walk of life and every country in the world; yet the overall sense of the place is that it’s serene. It was truly an incredible experience strolling through town and making my way toward the main shrine. And, even though I’m not by any strech someone you’d call religious, I couldn’t help notice that as I moved through the gates, I had goosebumps.

Some years later, I decided to bring my mother on a visit during the first chills of fall, and it was a different experience entirely. First, there were no people crowding or bustling about, and while I enjoyed seeing how popular Lourdes was with the devoted visitors who were there for spiritual nourishment, I was also delighted to have the shrine mostly to ourselves and to be able to share those moments with my mother.

Over the time since, I have often recommended Lourdes as a stop to my friends. Immediately they’ll reply, “But I’m not Catholic.” Well, we go to temples in China, Cambodia and Thailand, monasteries in Italy and France, and stand in long lines at the Vatican- so what makes Lourdes any different” Beauty is beauty. It transcends religion.

There’s a reason why I’ve visited Alberta’s Banff National Park more times than I can recall – and it’s all about taking in the majestic views and... 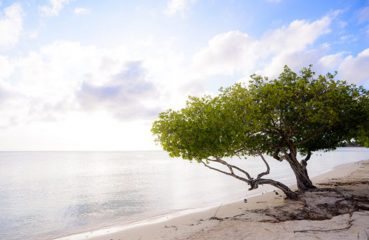 The island of Aruba, located roughly 18 miles off the coast of Venezuela, offers a beautiful setting for a destination wedding....