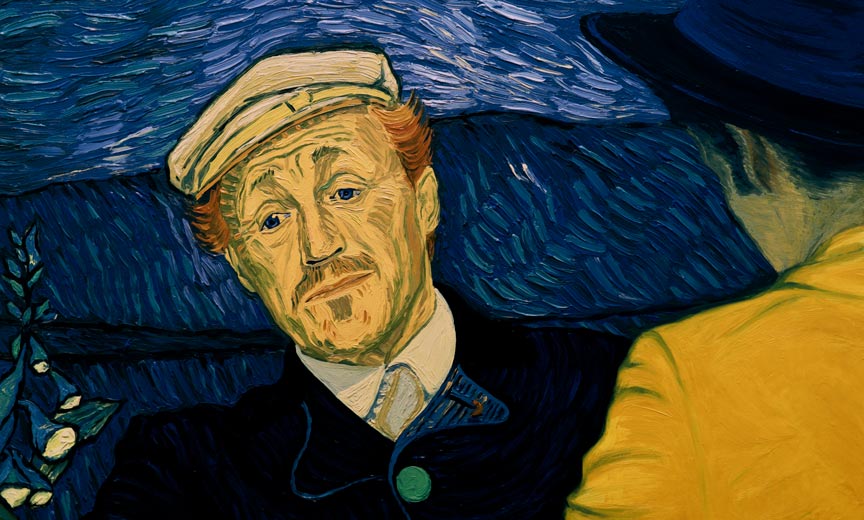 This visually unique motion picture employs the dreamlike “rotoscope” technique in which animation is traced over live motion picture footage, as seen in some of Richard Linklater’s films (Waking Life, A Scanner Darkly). However, in this instance, all the animation — appropriate to a film about Van Gogh — is all hand-painted in oils. A team of more than a hundred artists worked on the picture, and although its styles occasionally shift, the film never loses the consistent overall look of Van Gogh’s work.

The plot revolves around details of Van Gogh’s life and death by following one man’s quest to deliver a lost letter to Vincent’s beloved brother Theo. The deliverer (Douglas Booth, Noah) is the son of Vincent’s postman (Chris O’Dowd, Bridesmaids), and though he would rather be drinking and fighting in bars, he dutifully accepts his father’s request to deliver this one last letter from the prolific painter. Both men, like all the characters in the film, including Vincent’s doctor (Jerome Flynn, Game of Thrones), the doctor’s daughter (Saoirse Ronan, Brooklyn), and a humble boatman (Aidan Turner, The Hobbit), recall real people from the real Van Gogh’s life whom the artist painted in his final highly productive years as one of history’s most troubled yet important artists. The technical and artistic accomplishment of this motion picture — with its astounding 65,000 oil-painted frames — serves to illustrate a strong, personal and fateful story that embraces both the facts and the mysteries of a man who would eventually be proclaimed the father of modern art. THE WORD: A remarkably tender, humanizing look at a towering legendary figure. COMING TO: Theaters 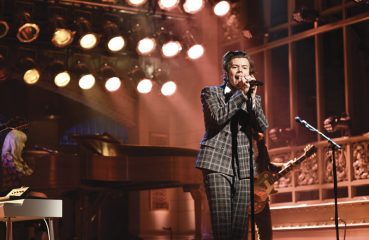 Love Music? Tune In to the iHeartRadio Music Festival

The iHeartRadio Music Festival is one of the biggest in the business, and unites talents across the spectrum for an all-star show that will be recorded September 22–23 in Las... 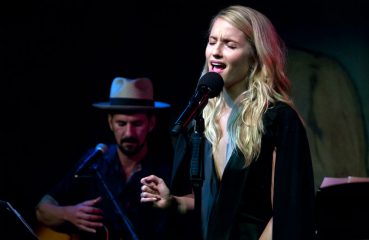 “For years I was on a TV show where I sang high all the time,” Dianna Agron tells the crowd at the Cafe Carlyle — referring to her years playing Quinn Fabray on Glee). “It...