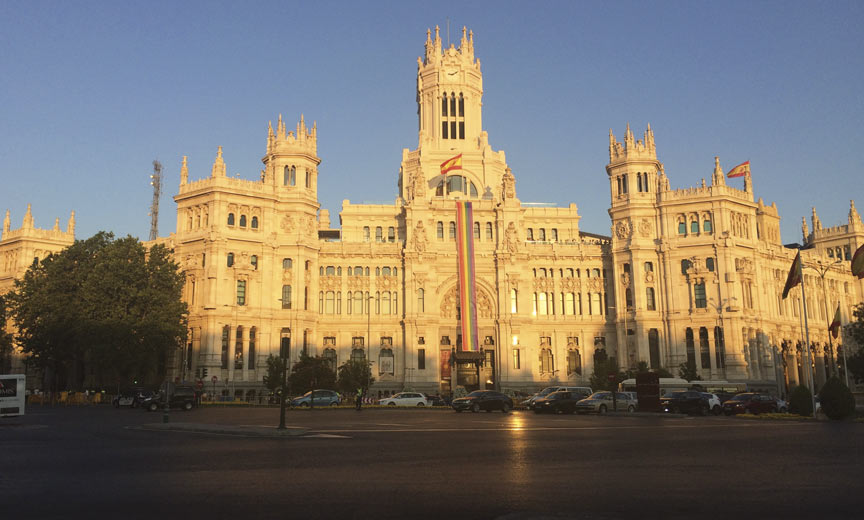 Madrid prepares to push its phenomenal Pride into overdrive for this year’s WorldPride — the crowning glory of the city’s rebirth as a global gay Mecca. It’s hard to believe now, but the first time I visited Madrid, I had to put real effort into tracking down any gay people.

The year was 1990, and Madrid’s gay community was exponentially more discreet than they are today, but I knew Chueca — the then-scruffy neighborhood I’d only glimpsed onscreen in Pedro Almodóvar movies — was where the city’s few gay bars hid in the shadows. So as I headed out for the evening on my first Friday in Madrid, I asked my hotel’s front desk clerk for directions to Chueca. “Oh, no! You don’t want to go there,” she cautioned, glaring me like I’d asked her how to get to Hell. I assured her that I most definitely did want to go there.

She hesitantly scrawled some directions onto a map, which I followed to Chueca. As promised, it was a little unkempt, but it was also packed with young people having a good time, in the style of La Movida Madrileña. I would later learn that this was a way of life for young Madridians — a devil-may-care response to Spain’s decades of oppression under Franco. Chueca was the movement’s spiritual nucleus, and to me, the place didn’t feel dangerous: It felt totally alive. The streets weren’t overtly queer by any means, but I managed to find my way to the area’s few small gay bars, and I knew I had found what I was looking for.

I fell in love during that first trip — not with anyone in particular, but with Madrid itself. It’s a city that radiates vitality, a place that warmly and instantly sweeps you up into its love of life. I’ve been back several times since, and I’ve watched the astoundingly explosive growth of the city’s gay scene over the years.

Starting in the mid ’90s, Madrid’s ever-less-closeted gays settled in Chueca en masse and transformed it into a bona fide gayborhood — one of the world’s best-known — which is now a magnet for gay travelers. I’ve been lucky enough to be in town twice for Madrid’s incredible Pride, a multi-day celebration that the entire city turns out to share. It certainly transforms Chueca into a nonstop, giant street event. And the climax to this exhilarating experience is the largest Pride parade in Europe — the second biggest on the planet.

This year, Madrid will kick its Pride into hyperdrive by becoming only the fifth city to ever host WorldPride, a global event organized by the InterPride organization. The event was last held in Toronto in 2014 — the first time it was held in North America. New York will be next to host in 2019, to coincide with the 50th anniversary of the Stonewall Riots. But this year, WorldPride belongs to Madrid, where some three million people are expected to congregate for an 11-day extravaganza. It officially opens June 22 — and promises to be a truly international celebration of culture, sports, human rights and more.

A CELEBRATION FOR A SPECIAL YEAR

Madrid’s gay community marks a number of milestones in 2017, so it’s only fitting that this is the year the world’s attention will shift to the Spanish capital. It’s the fortieth anniversary of the first-ever Pride demonstrations in Spain; the thirtieth year that Pride events will be anchored around Chueca; the twentieth time that the parade will include floats; and the tenth anniversary of EuroPride 2007 — when Madrid first hosted the annual European Pride event (the best-attended EuroPride on record). Technically, this year, Madrid is again the host of EuroPride, though it will all be subsumed into the greater celebration of WorldPride.

As it usually does, Chueca will serve as the busy epicenter of the Pride festivities. Most of the main events will be mounted here, including concerts and performances on six open-air stages. Some events will take place in the streets themselves — like the fantastic annual “high heel” race: always a mad stiletto-clad dash. Chueca will be officially declared the WorldPride hub with a Pride Proclamation on June 28 in Plaza Pedro Zerolo — a public square recently renamed for the late Spanish LGBT rights activist who passed away in 2015.

On June 24, a special WorldPride Park will also spring up in Madrid Río, the huge green space running along the city’s Manzanares riverfront. Just a 15-minute walk from Chueca, WorldPride Park will be free to the public and packed with exhibition stalls for local and global LGBT organizations and vendors. A cultural stage will feature music, dance and other stage performers. Food offerings will reflect both Spanish cuisine and a dazzling array of global culinary diversity. For the athletically inclined, a full slate of sports and games have also been organized for the park.

If your sport preferences lean more toward rooting than running, you can head to the ninth edition of Madrid’s Pride Games. Scheduled from June 23 to 25, the games will include basketball, football, track, swimming, table tennis and volleyball. Last year’s Pride Games drew 900 international and local participants; WorldPride’s numbers are expected to be markedly higher.

For the culture-minded, WorldPride will also be packed with a variety of options, largely under the banner of Madrid Pride’s official “Muestra•t” cultural festival, centered on Chueca’s Plaza del Rey. Theater, music, film, dance, literature, art, drag and cabaret events will take over spaces throughout Chueca and beyond, with acts ranging from talented up-and-comers to bona fide superstars. Headlining musical performers for Madrid WorldPride are yet to be announced, but should be hefty names if 2014’s Toronto WorldPride is any indication: that year featured major acts like Tegan and Sara, Carly Rae Jepsen and Peaches. Many of the city’s best-known arts venues, like the Thyssen-Bornemisza Museum (pictured above, museothyssen.org/en), will also get in on the WorldPride action. Smallish but packing a big punch, the Thyssen-Bornemisza boasts one of the world’s most impressive private collections, and the venue will be showcasing LGBT-themed works with special tours during WorldPride. Matadero Madrid (mataderomadrid.org), a sprawling industrial complex that once served as Madrid’s main slaughterhouse, is now one of its most cutting-edge contemporary arts settings and will also host a number of WorldPride-related performances and events.

Expect even Madrid’s landmark buildings to embrace the mood —decking themselves out in special Pride colors. An enormous rainbow flag, for instance, will drape the front of Cibeles Palace — Madrid’s City Hall (pictured, top of page), while rainbow-colored lights will illuminate Spain’s Congress of Deputies. One likely crowd-pleasing highlight will be the annual Mr. Gay Spain pageant (pictured, above), where hunky male titleholders from across Spain work the runway as they compete for the coveted nationwide prize. As an added bonus — while contestants slip from formalwear into swimsuits backstage between rounds — some of the club scene’s favorite performers will keep the crowd pumped.

In addition, the community will gather for Madrid Summit 17 — WorldPride’s human rights conference. It was organized by the Harvey Milk Foundation and Autónoma University of Madrid. Under the umbrella themes of education, health, culture, workplace and politics, the conference — which runs from June 26 to 28 — will focus on current hot-button topics like bullying, refugees, discrimination and legal issues.

Naturally, parties will be a major part of WorldPride and Madrid’s electric gay scene will be offering scores of them — from theme nights in smaller bars to massive clubs where thousands of revelers will amass. Madrid club leader We Party will be the go-to (and is, in fact, the official) megaclub brand for Pride, with nine full nights of special We Pride parties launching June 24. Those with more frothy tastes may prefer the Viva Pop Festival, which hosts more lighthearted parties focusing on drag, eclectic fashion and fun. WorldPride Madrid’s main event will be its massive parade — which, in typical Madrid Pride fashion, will be actually less a parade than a legion of celebrants hundreds of thousands strong, packing the wide boulevards of Paseo del Prado and Paseo de Recoletos, from the Calle de Atocha to the Plaza de Colón. They’ll all be cheering on a series of very slowly moving “floats” — which are actually doubledecker buses each sponsored by a different company or organization — inching their way through the surging sea of people, which this year is expected to top out at well over two million. Madrid’s WorldPride Parade is slated for Saturday, July 1, kicking off in the late afternoon and extending past sunset and into the early evening. Much of the crowd will then migrate to the streets of Chueca for the incomparable climax of every Madrid Pride: the street party.

For many, the best part of any Madrid Pride night is simply hanging out with friends (old and new) in the packed and jubilant streets of Chueca — where there’s a bar for virtually every LGBT proclivity. During Pride, they usually get so packed that patrons spill out onto the streets, eventually merging into one colossal neighborhood-wide party that extends into the wee hours. So, yes, things have certainly changed since my first trip to Madrid. In 2017, there will be no longer be any mystery about where Chueca is — and you certainly won’t have any trouble finding the gay scene.

Learn more about Spain at spain.info, about Madrid at esmadrid.com/en, and about WorldPride at madridorgullo.com/en. 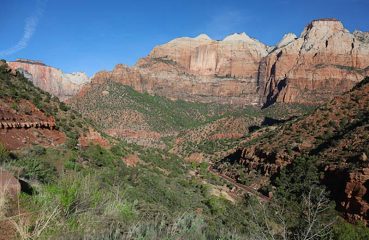 Zion National Park: A Tale That’s All About the Trails

I have always wanted to explore Southwest Utah and Arizona’s National Parks but never had the chance. Living in LA, it’s oddly difficult to convince friends to drive anywhere... 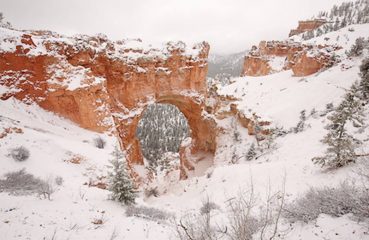 Bryce Park: The Hikes Are on Trails, Not in Tourist Fees

After two days in Zion, we were off to neighboring Bryce National Park. We had to leave Zion for Bryce early because the weather was forecasting snow. We needed to arrive ahead of...