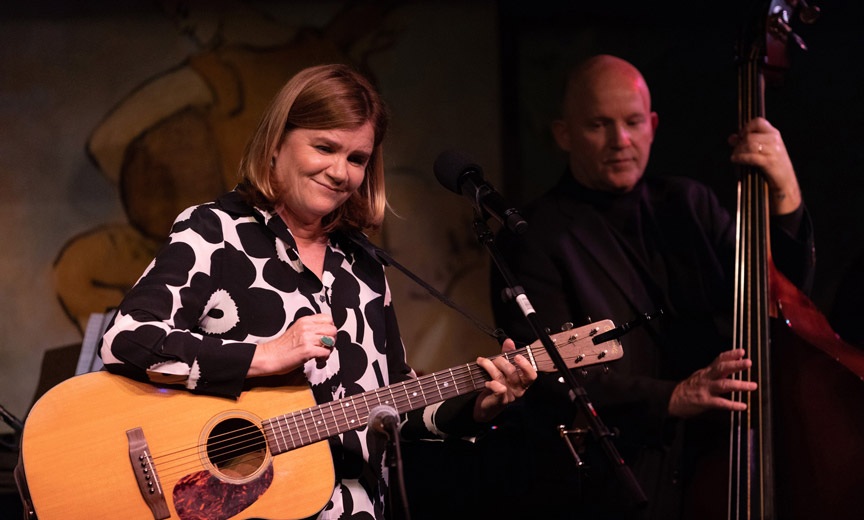 You probably think of Mare Winningham as an actress. She may bring to mind characters from the angsty youth of St. Elmo’s Fire to the fretting maid of American Horror Story. But even if you’re familiar with her Oscar-nominated turn singing in Georgia or her Public Theater appearance in Girl from the North Country, you may have been surprised by the sheer level of musicianship she displayed at Café Carlyle.

Mare Winningham: With Guitar In Hand

I can’t recall when I saw a star of Winningham’s caliber ascend to the Carlyle stage more ready to accompany herself. But she did so on a variety of instruments, including guitar, piano and dulcimer. Completing the sound were brothers Tim and Dennis Crouch. The authentic twang of their instrumentation put me in mind of Ken Burns’ Country Music. This was before Winningham mentioned they had played with many of the doc’s featured artists. I also did not expect a set list so heavy with original material. Artists appearing at the Carlyle often lean heavily on the American Songbook (and audiences still go wild).

But Winningham revealed herself to be an artist deeply interested in the craft of songwriting. She confessed that she held aspirations to create a family band with her children. And though that never came to pass, she proudly shared songs by her daughter and co-written with her son. Touchingly, she described the latter dropping off a pile of poems and her realization that they were “songs in search of a melody.” Winningham’s own parents also got a nod. Her Mom won a cache of great folk music from an appearance on Hollywood Squares that Winningham credits with instilling a love of music in her from an early age. 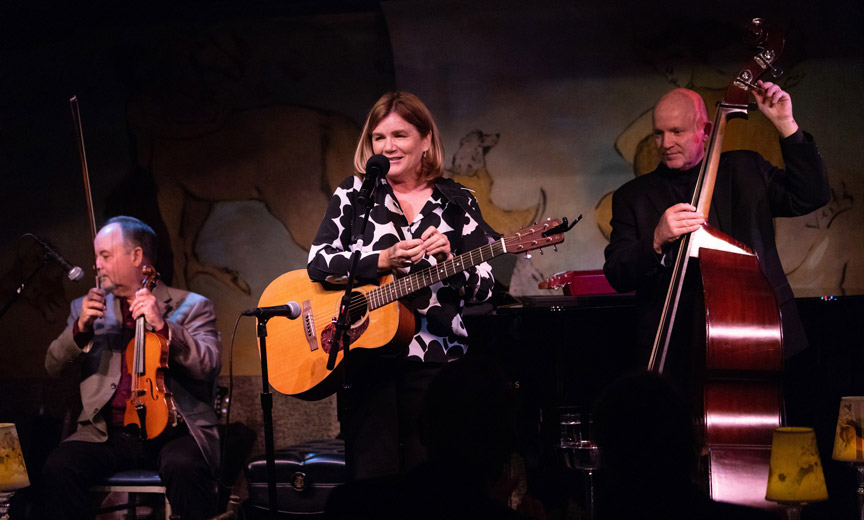 Winninham also clearly has immense natural gifts. My husband and I would compare notes on when we hear shades of Jodi Mitchell and Dolly Parton in the star’s mellifluous vocals. She also shared aspects of creating her four albums of original music, including what she calls “Jewgrass” – Jewish country folk. When she sang selections from it, I couldn’t help but think that this was the kind of cross-cultural music the Transparent Musicale Finale was trying to achieve. And she offered her musical meditations on topics such as grief (“Well It’s Gone”), gender politics (“What Might Be”) and the workings of the universe (“Einstein”).

The standout performances of the night showcased Winningham’s beautiful voice, adept playing, endearing connection to the audience and evident respect for great songcraft. These included a plaintive acoustic “All Apologies” (Kurt Cobain) and “Downtown” (Tony Hatch) feauturing Winningham on Dulcimer. Winningham also moved audiences to gasps and tears with performances of Patty Griffin’s “Makin’ Pies” and Body Dylan’s “Forever Young.” And if you can’t catch her during her brief run at Café Carlye, fear not. You’ll have a chance to marvel at Mare when Girl from the North Country heads to Broadway in February. 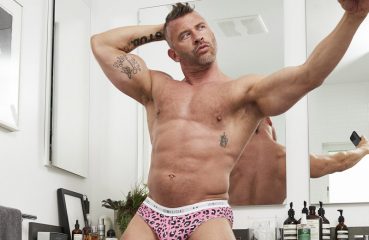 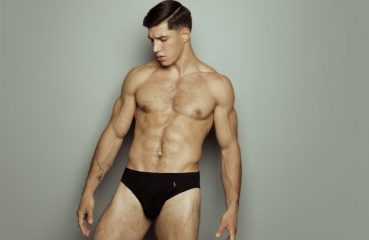