Marti Gould Cummings dishes about how his “really messy and androgynous” style of drag has evolved, and teases his upcoming gigs.

Then, on April 1, Marti makes his debut appearance at 54 Below, performing a celebration of nineties rock. He and his band, Marti and the Cummers, will sings songs from Led Zeppelin, Ozzy Osbourne, Green Day, and Rod Stewart. They will also throw in a number or two from Peter, Paul & Mary, Pat Benatar and Elvis. Eric Miranda, a frequent collaborator of Robert Plant’s and Led Zeppelin’s, will lead the band consisting of Brad Proctor, Yuka Tadano and Barry Nagel, with Andre Jordan and Kristina Nicole Miller singing back-up. Special guest performers will include Tony Award winner Cady Huffman and stage stars Hernando Umana (Kinky Boots) and Michelle Dowdy (Hairspray).

We spoke to NYC’s hardest werrrrrking queen about his latest gigs.

METROSOURCE: You’re the hardest working queen in the NYC drag scene. Has it all paid off yet? Are you living large?
MARTI GOULD CUMMINGS: [laughs] I am living large by hustling every day to make my shows bigger, better, and funnier each time! All my tips go into savings because there is no drag retirement fund! I love working hard and being busy.

How is your style of drag different from other queens’?
Every drag style is different. Mine started out really messy and androgynous and has become my own unique style. Like a glamourous Rachel Maddow. [laughs]

Tell us about your weekly “Stage Fright” show at Therapy.
“Stage Fright” is such a blast! It’s a mix of Jimmy Fallon and Carol Burnett with a twist of RuPaul! I’ve had guests that have included Dancing with the Stars winner Rumer Willis, Cheyenne Jackson, three of the original Rent cast – Adam Pascal, Anthony Rapp, Daphne Rubin Vega – and Tony winners Joanna Gleason and Alice Ripley. It is such a dream job because I get to do crazy drag things and then have these people I idolize on stage with me!

So you’re not related?
I wish! My family is of Scottish origin and I think we added the “S” to our name when we came to America in the 1700s, so maybe we are 36th cousins, four times removed?

What type of questions will you be asking Alan?
Everything and anything!

Matt Doyle will also be part of the show. He’s dreamy! Will he be safe with you and Alan?
Matt is such a babe! He has a new album out so I thought it would be fun to have the two of them! We are gonna play a game together on stage – I don’t think anyone is safe!

Do you allow audience participation?
We usually do an audience question-and-answer/talkback.

You’re performing 54 Below on April 1 with your rock band Marti and The Cummers. How did this idea come about?
I was doing a show at Webster Hall with Kenyon Phillips and Daphne Rubin-Vega directed by the incredible Tony-winning goddess Cady Huffman, and we have a huge awesome rock band in the show, and I was like, “Holy moly!” This is what I want to do next! So I formed a band!

What songs will be performing? How do they relate to your life?
My dad really influenced my taste in music. He would jam out to The Stones, Rod Stewart, Bowie all the time when I was a kid. So I’m gonna do everything from Elvis to Bowie to Green Day!

What song will you be singing in 10 years?
Time will tell! I’m always changing what style of music I like performing!

We Met the Season 8 Queens of "RuPaul's Drag Race"

Now that we’ve met the Season 8 queens, get some scoop on what to expect from them on this season of RuPaul’s Drag Race – and some insider advice to the girls from... 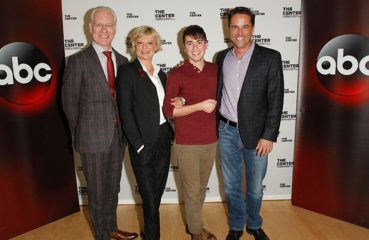 ABC recently sent cast and creators from its buzzy new comedy The Real O’Neals to chat with Tim Gunn before a lively audience at NYC’s LGBT Center....