Written by Metrosource Editor| May 1, 2016| Entertainment

Playing he original Frankie Valli in the Broadway smash Jersey Boys, Michael Longoria learned to hit the high notes. Now he’s reaching for the stars with a new album and a cabaret debut this week in New York City. Longoria’s new album is called Broadway Brick By Brick, a Latin-influenced assortment of classics from the Great White Way that includes “Maria” from West Side Story, the title tune from The Sound of Music and A Chorus Line’s “Music and the Mirror.” The album is available through iTunes on Cinco de Mayo (That’s May 5, for some of you), and is directed and arranged by Broadway great John McDaniel (Patti Lupone, The Rosie O’Donnell Show), produced by Emmy-winning producer Jeffrey Lesser (Barbara Streisand, Kristen Chenoweth) and orchestrated by Jesse Vargas (Clay Aiken).

This album chronicles Longoria’s personal history, beginning with his youth in Los Angeles as a Mariachi singer, his struggles with his Mexican family as he comes out, his road to NYU via scholarship, and finally arriving as a Broadway success.

Longoria brings his show to Joe’s Pub at the Public (425 Lafayette Street) May 2 and 3. You can get a little taste by watching this YouTube teaser: 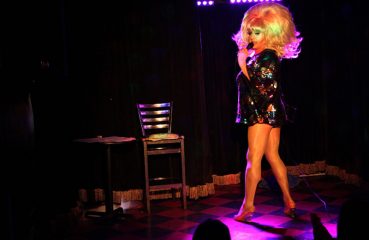 Lucky Be A Lady – and Sometimes A Bunny. Too

Lady Bunny Is The “Trans-Jester” in A Raucous New Show at NYC’s Stonewall Inn Despite her long nightclub career, Lady Bunny has never delved much into show tunes, but in...