Growing up Gay on Miami’s Mean Streets in Moonlight 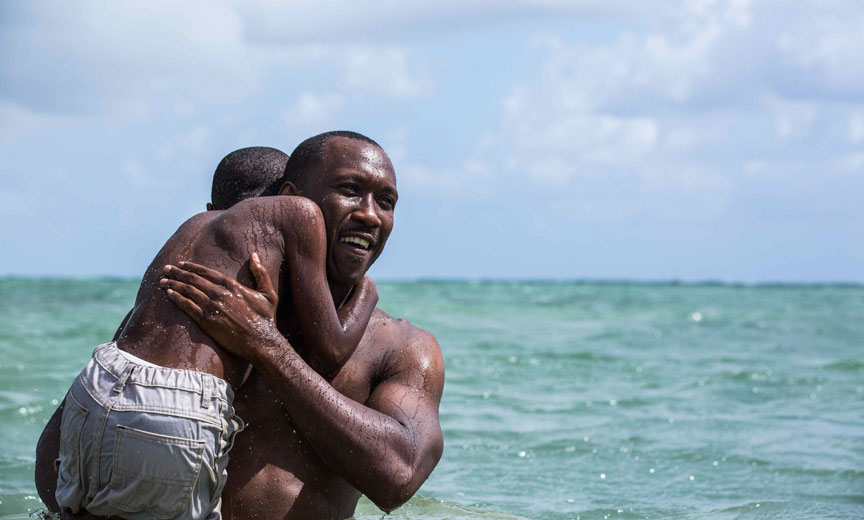 Executive produced by Brad Pitt, Moonlight is a film of exceptional quality from writer and director Barry Jenkins. it’s both a portrait of a black gay man growing up on the hard streets of Miami and a soul-stirring story of human connection.

There is little danger of exaggeration in describing Moonlight as visual poetry — except for the fact that it would underserve its also-wonderful sound work. What we’re talking about here is overall film-making excellence. The acting is superlative, especially from Mahershala Ali — whom you’ll recognize from roles on House of Cards and Luke Cage — and Andre Holland (pictured, left) — of The Knick and American Horror Story. But among a uniformly stellar cast, special recognition must be given to Alex Hibbert, Ashton Sanders, and Trevante Rhodes (pictured, right) who together create a seamless portrayal of main character Chiron at three stages in his life: as a child, an adolescent and a man. THE WORD: This is most certainly one of the best films of 2016. COMING TO: Home Video, with a release date of February 28 and format availability on DVD and Blu-ray.

Robbie Williams Returns with a Little Help from His Friends

On his strongest release to date, the veteran British performer collaborates with a wide range of unexpected special guests....

One Response to :
Growing up Gay on Miami’s Mean Streets in Moonlight