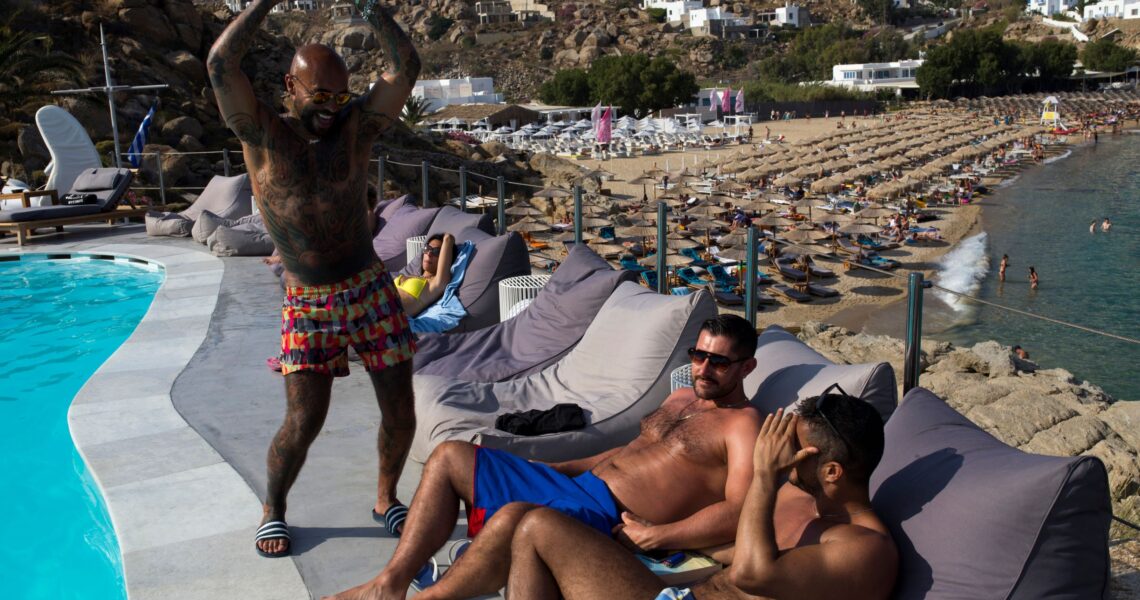 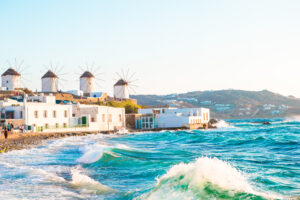 Pleasure comes in waves. The Mediterranean Sea massages the soul with its undulating rhythms, and Mykonos is the maestro of queer satisfaction. Its crystal blue waters are positively electric, immersing your body in Zen as your mind drifts with the current.

Mykonos is an island of hidden gems. Though the Covid pandemic has obscured the glimmer of gay travel for the time

being, we reflect back on our favorite sojourns and maintain hope to return to these glorious vistas. Our perspective is much like the landscape of Mykonos itself: rugged yet inviting, and stretching pleasantly along the horizon with a welcoming wink. 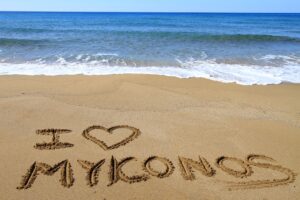 The Greek islands are an LGBTQ+ wonderland. Mykonos boasts several gay beaches, many of them clothing optional. While Super Paradise is the most famous, it’s worth your while to venture further from town and miles from your withering innocence. Elia Beach is less crowded than its contemporaries, yet its splendor lingers in the surrounding landscape. Curious tourists hook up in the nature trails just west of Elia, convening at a tiny yet titillating beach just off the beaten path. 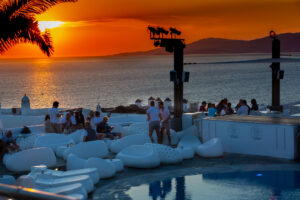 After nature takes its carnal course, adventurous beachgoers find their way back to the city of Mykonos. The gay scene has a particularly pronounced migratory pattern as scintillating day turns to sultry night. Embrace dusk at the appropriately named Elysium Sunset Bar, home of infamous drag shows and pre-dinner cocktails.

Follow the fierce flow as the evening brings you to Lola, a cabaret decked out with enough Hollywood flair to celebrate the starlet in all of us. Lola’s daiquiris are sinful, so only have three-ish. Then it’s on to Porta Bar, a two-level enclave where you’re likely to find a few bears, fur sure. 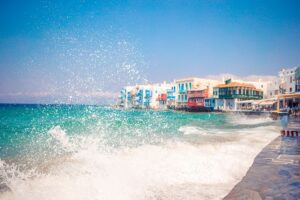 Don’t let the night recede into blissful memory just yet; conquer it! The shoreline of the Little Venice neighborhood boasts the dueling dynamism of Babylon and Jackie O. These two pulsing dance clubs sync their beats with the crash of the waves below. Sea foam sprays up intermittently, catching the flicker of strobe lights that bathe the coast.

The party rages until dawn, at which point sunlight cleanses your regrets and beckons you back to the beach to start all over again. Was it all just a glorious dream? Pinch yourself (or a consenting hunk nearby), because this is Mykonos. 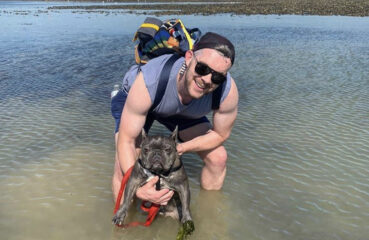 We’ve seen him shirtless on screen, we’ve seen him pantsless in our dreams, but now Russell Tovey is baring more than just his skin; he’s baring his soul. Tovey is best... 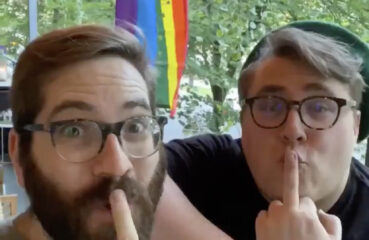 These colors don’t run… they dance! When a Chicago couple had a Pride flag stolen from their perfectly manicured terrace, they responded defiantly and dazzlingly. Allow us to...