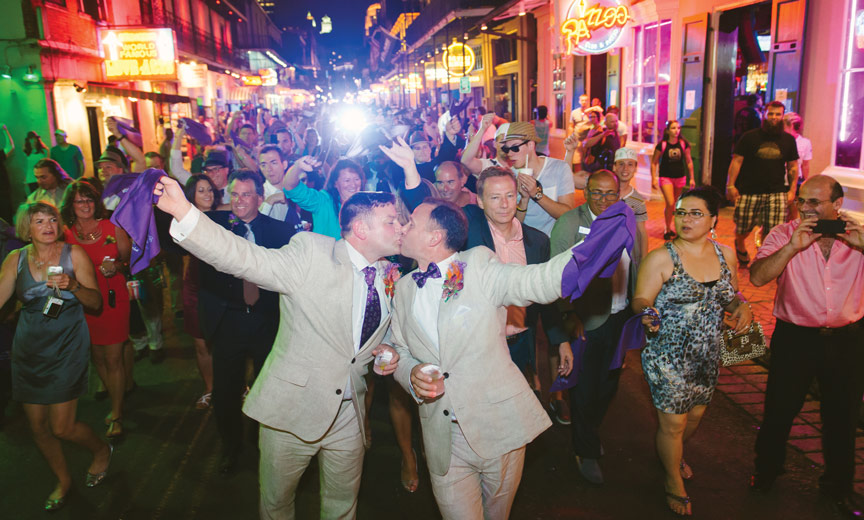 The LGBTQ community is invited to party in a city where tradition triumphs over tragedy and every meal is cause for celebration.

For anyone who has partied in New Orleans, it’s no surprise to learn that a street named Euterpe runs parallel to one called Terpsichore: the Muse of Music flanked by the Muse of Dance. This makes sense for the city that gave birth to jazz — the same city where $200 and a permit will buy you a personalized parade, complete with police escort. In the Big Easy, celebration is life, and vice versa.

Of course, it’s probably also pertinent to point out the presence of Melpomene Street, named for the Muse of Tragedy, since this is also a city that’s survived its share of natural disasters. But what’s more resonant about New Orleans is how it flourishes in the face of adversity just as surely as jazz was born from the blues. It’s a city with a wicked sense of humor: a city that’s survived catastrophic fires and invented Tabasco sauce. The nation’s first cocktail, the Sazerac, originated here as well, which comes in handy because when life throws a curveball, New  Orleans throws a party.

For decades, one of the best parties in New Orleans has been Friday Lunch at Galatoire’s. Founded in 1905, the beloved Bourbon Street restaurant displays the indomitable spirit of New Orleans when local luminaries and savvy visitors pack the 132-seat downstairs dining room for an hours-long end-of-week celebration that easily slides into evening. And just as with nearly everything about New Orleans, there’s protocol behind this venerated local tradition: line sitters, for example, wait in front of the restaurant from sunrise until the doors open at 11:30 am. As Galatoire’s does not take reservations for Friday Lunch, patrons hire sitters to hold their place in line. People have been known to send anyone from their maids to their children to wait in their stead.

Read Next | These Are the Best Gay-Friendly Hotels in NYC 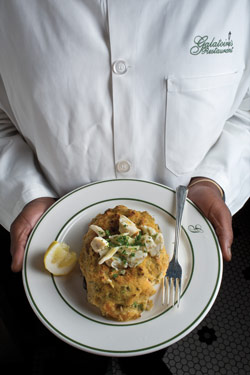 As they used to say about Rick’s in Casablanca, everybody comes to Galatoire’s — and especially at Friday Lunch where everybody dresses to the nines and everybody drinks. Women in millinery so outré as to rival Ascot laugh at the repartee of bow-tied men in seersucker suits near a four-top of Audrey Hepburns in pearls and smart little black dresses. Once the line sitters are paid and the maître d’ has paired off guests to their favorite waiters, the party continues in the wallpapered-and-mirrored dining room with its brass sconces glimmering beneath vintage paddle fans. Birthday celebrants toast with a round of Sazeracs and Champagne corks pop in the air. At Galatoire’s, anyone can stand — atop a chair or a table — and raise a glass to the entire room, which quiets just long enough to hear who’s being toasted (or roasted).

Apart from the riotous roar of the party, there’s also the food: a mesmerizing mélange of French Créole cuisine inspired by the founder’s homeland and the ensuing culinary influences on New Orleans gastronomy. You’ll see soufflé potatoes and bowls of gumbo and plates heaped with crabmeat and shrimp remoulade. Midway through the crawfish étouffée, a brass band appears and it’s only minutes before half the room forms a second line, which is New Orleanspeak for the revelers who follow behind the music, white napkins twirling to the brass beat. More Champagne for the table! Another round for the room! Not a person at Friday Lunch returns to the office.

Along with music, the culture of New Orleans revolves around food. In fact, given how much New Orleans celebrates its culinary heritage, it’s a wonder there isn’t a street named for a Muse of gastronomy. Unlike most American cities, New Orleans has a cuisine that is definitively sui generis: unmistakably its own, a jambalaya of elements spiced by the early French and Spanish settlers and the influx of Acadians commingling with West Africans and Native Americans, as well as Sicilians. Each culture contributed to what is often known as Créole and Cajun — though most locals know it best as the food of New Orleans. Or as one native remarked, “You say the word ‘Arcadian’ three times fast, it’s an easy slide into ‘Cajun’”—which is as much a lesson in cultural history as it is in phonetics. 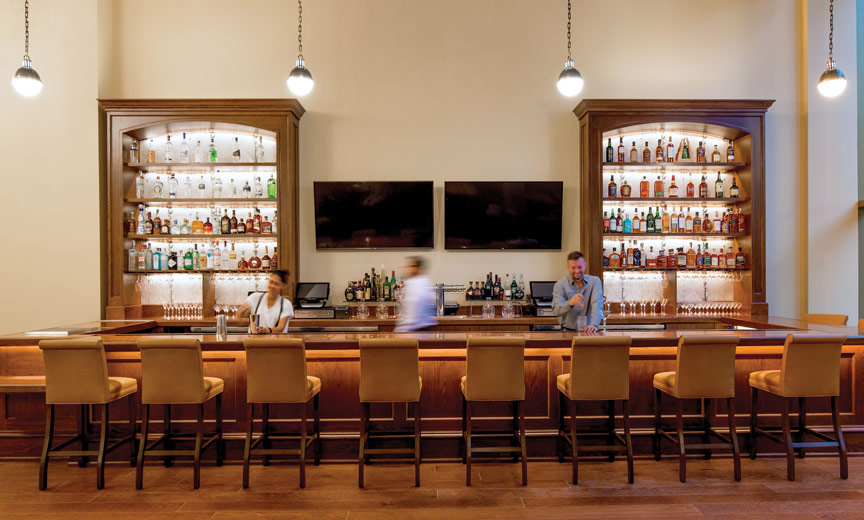 Food is such an integral part of New Orleans that the local utility company New Orleans Public Service, Inc. (better known by its acronym NOPSI, visible on thousands of manhole covers throughout the city) used to share recipes with its customers — both on its monthly bills and in its weekly Rider’s Digest,distributed on city streetcars and buses. For decades, local residents paid their bills in person at the flagship NOPSI building for the privilege of watching NOPSI’s home economists cook up a meal.

As a fifth-generation local recalls, “My mother made it a point to pay her NOPSI utility bills in person [because] housewives flocked to NOPSI to see live cooking demonstrations from NOPSI’s Home Economics Department, all of whom wore white lab coats with the company logo.” So popular were the NOPSI recipes that they were compiled in a 1951 cookbook called Créole Cuisine, which has become “the ultimate community cookbook,” according to Elizabeth Williams, president and director of the Southern Food and Beverage Museum.

Today, NOPSI’s landmark limestone building, built in 1927, is home to NOPSI Hotel, a luxury hotel that retains the grand lobby with its original 21-foot vaulted ceiling, ornamental columns and stone terrazzo floors. Recognized by Historic Hotels of America for its architectural integrity, NOPSI opened in 2017 on the building’s 90th anniversary, and one of its primary goals has been to maintain the convivial civic spirit that attracted locals for years. 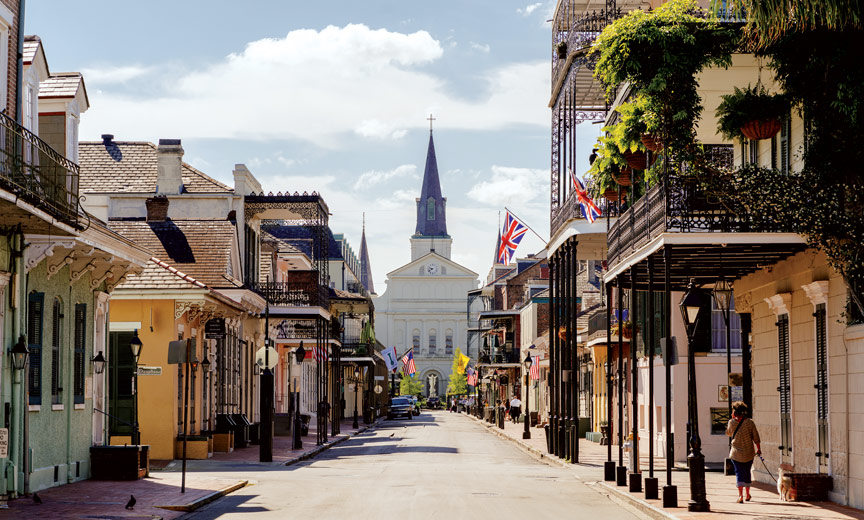 In keeping with the building’s Prohibition-era antecedents, the lobby bar underCURRENT offers a patio where guests can sip classic gin and Champagne cocktails inspired by 1920s luminaries. Furthering the connection to the building’s past as a gas and electric power company, NOPSI’s rooftop bar and pool is known as Above the Grid, a name which becomes literal at sunset when the city below transforms into a shimmering squares of light.


Equally impressive are the massive chandeliers that illuminate the Dryades Ballroom, which was repurposed from an industrial warehouse located behind the original NOPSI building. Massive arched windows are framed by exposed brick walls that rise to a 30-foot ceiling complete with steel crane from the original substation.

Apart from weddings and receptions, the spacious venue provides an elegant setting for a culinary odyssey led by NOPSI’s executive chef. The seven-course “Louisiana Culinary Exploration” revisits such New Orleans classics as the regional crawfish boil, crab ravigotte and barbecued shrimp, followed by a chef’s demonstration of the classic Bananas Foster flambé.

After these gastronomic pleasures, NOPSI’s Deluxe Suites provide a post-prandial sanctuary. Accommodations include a sleek and stylish living room parlor, two large screen televisions and a double-sink spa bathroom with a walk-in shower large enough for several members of the New Orleans Saints. A member of LUX Preferred, the 217-room hotel serves as a relaxing base camp amidst the 24/7 revels underway just outside the lobby doors. 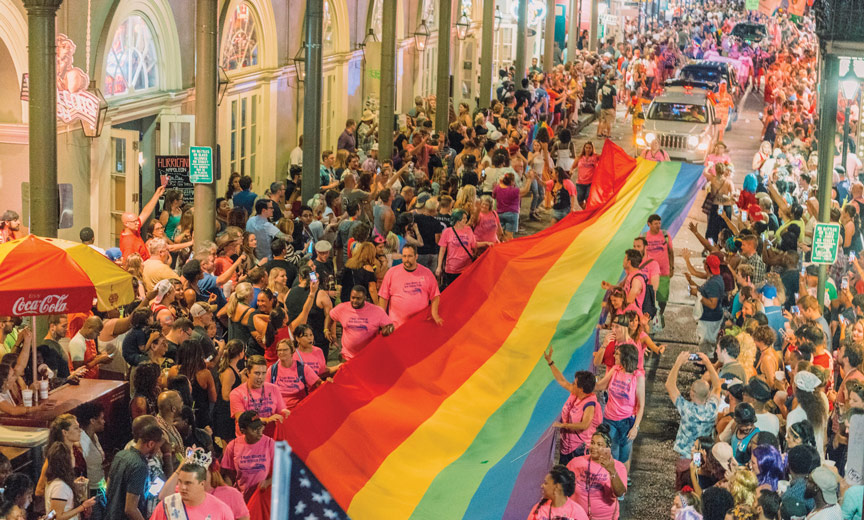 Throughout 2018, New Orleans celebrated its tricentennial with a citywide party known as NOLA Tricentennial (1718-2018), which was marked by redevelopment and major infrastructure projects — not to mention the city’s 135 annual festivals. One of the city’s most vibrant post-Katrina neighborhoods is Arts District New Orleans (ADNO) which transformed a neglected warehouse neighborhood into a thrumming hub of creativity.  A short walk from NOPSI, ADNO is anchored by the brand-new campus of The National WWII Museum and its cultural neighbors, the Ogden Museum of Southern Art and the Contemporary Arts Center. Bucolic Julia Street has become the backbone of a neighborhood notable for its galleries, cafés, restaurants, bars, and boutiques.

Given the city’s glorious gumbo of disparate cultures, it’s easy to understand how hospitality became the hallmark of New Orleans Parish. After all, one of the city’s most famous fictitious heroines declared, “I have always depended on the kindness of strangers,” a sentiment with which Tennessee Williams was familiar from nights spent in the French Quarter at Café Lafitte in Exile (arguably the oldest gay bar in the States — and still open all day and night).

Unlike much of the South, which has kept the LGBTQ community at arm’s distance, New Orleans has a history of embracing LGBTQ people as family. The first gay Mardi Gras krewe appeared in 1958, followed by two more gay krewes in 1961 and 1969. For more than 30 years, Halloween New Orleans has been raising funds for Project Lazarus, an assisted-living home for those with HIV/AIDS. Meanwhile, over in the Tremé neighborhood, a small annual house party in the early 1970s grew into Southern Decadence, which has become one of New Orleans’ top five tourist events (along with Mardi Gras and Jazz Fest) with an annual economic impact of more than $250 million and attendance exceeding 200,000. 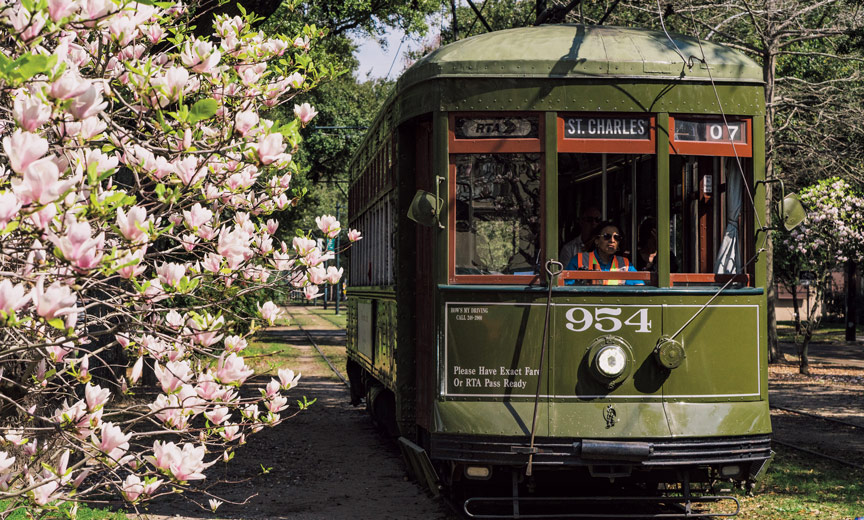 While the streetcar named Desire Williams made famous has been a bus line since 1948, you can still ride the St. Charles trolley: the nation’s oldest continuously operating streetcar line provides a leisurely entrée into the city’s Garden District. Located along the six-mile emporium of Magazine Street, Coquette has been a neighborhood favorite for brunch since its 2008 opening. Helmed by an award-winning chef/owner couple, the two-story restaurant is a culinary playground for the talented team in the kitchen who reinterpret Southern cuisine with their own contemporary twist.

Meanwhile, in the heart of the Quarter, while New Orleans was celebrating its tricentennial, Arnaud’s celebrated 100 years of classic French Créole cuisine in a restaurant widely considered the largest in the vicinity. Beyond the romantic ambiance of its main dining room and the seductive charms of French 75 Bar, the labyrinthine restaurant offers a warren of private dining rooms, including a pair of adjoining dining parlors known as Bourbon Suites. Apart from the marble fireplaces and a private bar (with a designated bartender), what makes this French blue and gold pair of parlors particularly appealing is the expansive covered balcony overlooking Bourbon Street. Few vantage points are more perfect for sipping French 75 cocktails while tossing beads into a crowd of people willing to do just about anything to snare a strand. 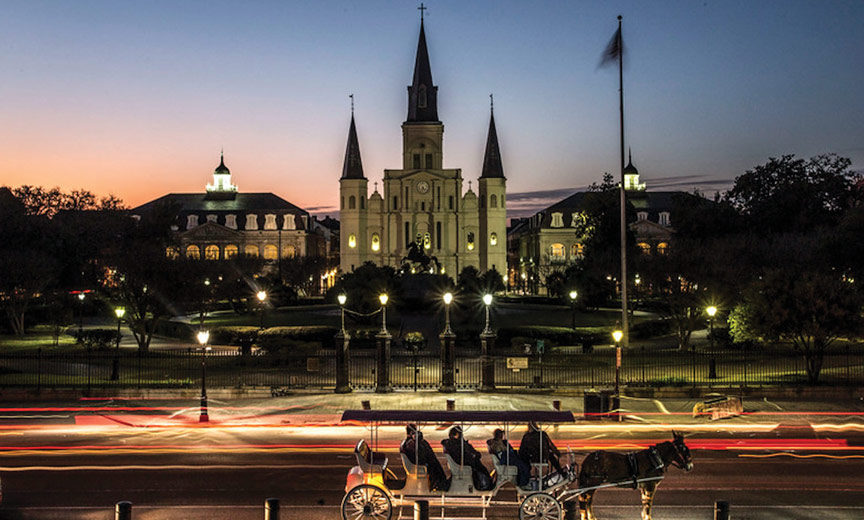 A few stumbles down the street from Arnaud’s is the Hotel Monteleone, home to The Carousel Bar & Lounge, the birthplace of Truman Capote — or so he liked to quip. The revolving bar makes a pleasant perch from which to witness the world go round — and to consider whether or not to call it a night. If you’ve drained your last glass, all-night room service awaits at NOPSI — or better yet, a table at Public Service, the hotel’s industrial chic restaurant that serves an incomparable pain perdu with bourbon butter sauce. But don’t be surprised if you find yourself tempted to order another round. After all, one of the joys of New Orleans is knowing that there’s always room for more.