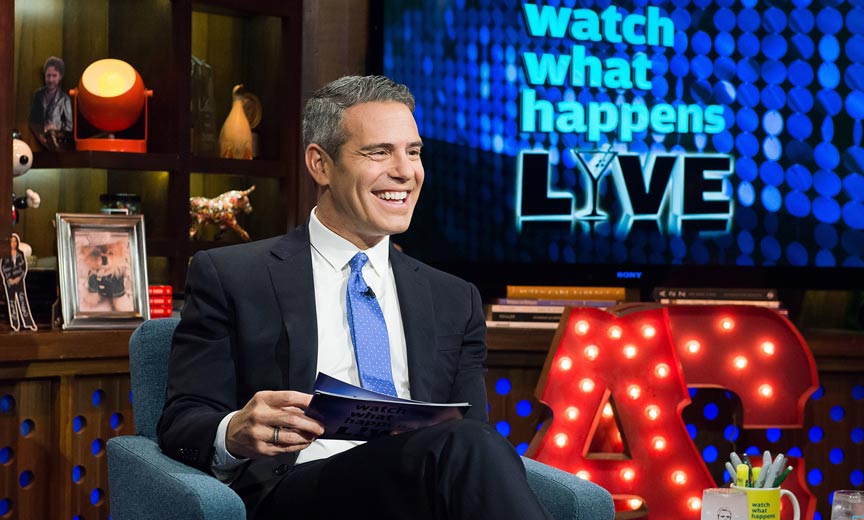 Topping our list of People We Love is a guy who’s as obsessed with celebrity as we are. Now as he prepares to release another candid look into his life behind the scenes, he offers a preview about how much he’ll dare to share.

A published diary can be an unforgiving reflection of its author, almost daring readers to ask whether he’s leading a life worth the pages it’s printed on. For best results, it helps to have a career in the spotlight — thoroughly sprinkled with the kind of public figures that make readers sit up and pay attention. The Andy Warhol Diaries is a famously successful example of the genre, chronicling eleven years of the artist’s star-studded life and work. More recently — if its status as a best-seller is any indication — that same approach has proven successful for another Andy: author, host and pop culture gatekeeper Andy Cohen. As he prepares to release a second volume, Superficial: More Adventures from the Andy Cohen Diaries, Cohen took time to talk to Metrosource about what readers can expect from their next peek into his private pages.

It turns out that Cohen is a great admirer of Warhol’s diaries; he mentions looking to them for inspiration multiple times in the course of writing his own. However he is quick to dismiss the idea that he’s carrying on the iconic artist’s legacy. “We share an interest in celebrity and pop culture; I would never put myself in his realm,” Cohen says. “Although I would like to think that he would be painting Real Housewives.”

Since Warhol’s diaries were published posthumously, he likely never felt pressure to make them feel full by shoehorning more into an already packed schedule; Cohen did. “I think in volume one, [The Andy Cohen Diaries: A Deep Look at a Shallow Year], there were things I did that I might not have done if I wasn’t writing that book,” Cohen says — pointing to joining Tinder and playing in the MLB All-Star Legends & Celebrity Softball Game. “It was almost like I was on a reality show.”

Even without these additions, most would agree that Cohen’s life provides plenty of raw material. More often than not, the diaries tend to read like pages out of Who’s Who — littered with lists of celebrities with whom he shares everything from intimate dinners to epic vacations. He sums up his some of his celeb besties in just a few words: Sarah Jessica Parker? “Twinkly,” he says. Amy Sedaris? “Shockingly funny.” John Mayer? “Electric Cowboy.” Anderson Cooper? “God that’s a tough one,” he says, mulling over a few possibilities. Finally he settles on: “Partner.”

This is before you even factor in the parade of celebs who stop by the the Bravo Clubhouse to appear on Cohen’s show Watch What Happens Live (which aired its thousandth episode this year). Some are part of the queue of Bravo reality stars Cohen helped to make household names. Others are lured by the fun of his often outrageously boozy late night chat fests.

“It’s kind of an honor and cool to be the only gay guy in late night television,” Cohen says of his unique place in a genre dominated by straight guys. He says that years of worshipping radio provocateur Howard Stern and moderating memorably contentious Housewives reunions means that he can “go there” with his guests in a way that other late night hosts don’t.” And go there he does: famously asking male guests about the size of their endowments and decorating the Clubhouse walls with ephemera his guests have left behind — from Julie Andrews’ teabag to a bottle of perfume he had made from, well, a liquid Lady Gaga left behind. “I think that has to do more with my own sensibilities than it does with being gay,” he muses.

Cohen also made waves late last year when SiriusXM Satellite radio shuttered its gay channel OutQ to make room for Radio Andy, which (like WWHL) is not expressly gay but meant to reflect Cohen’s point of view. “It allows me to develop content around my own kind of brand — which is an irritating word,” he admits. But it does offer an alternative outlet to Cohen’s friends like Sandra Bernhard and John Benjamin Hickey (who have shows on the channel) and affords Cohen an opportunity to reach his audience in a different way.”It’s also personally allowed me to do long-form interviews, which I don’t get an opportunity to do on Watch What Happens Live because the show is like short attention span theater, really.” 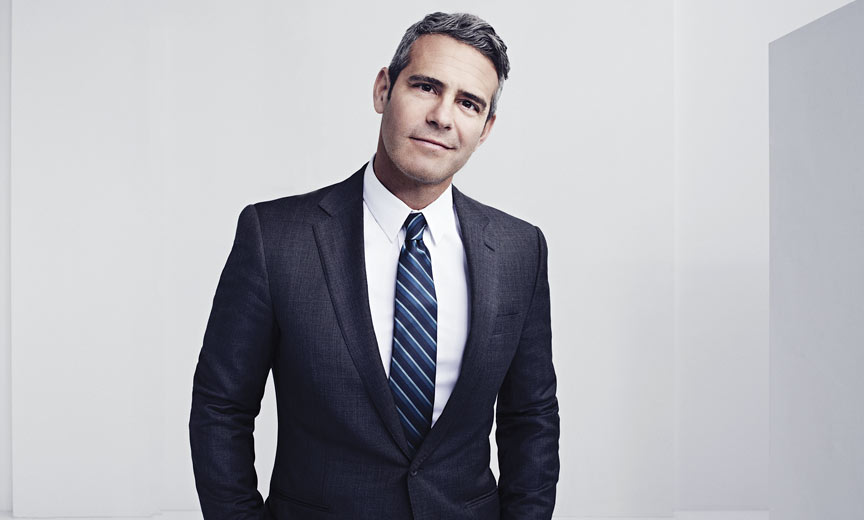 With so many outlets already, why another diary now? “I had so much momentum from having written a diary for the last year, it was really easy for me to keep going,” Cohen explains. “The publisher didn’t even know that they were going to want a sequel.” Nevertheless Cohen kept writing until they finally confirmed they would move forward with it.

Though the writing process was continuous, Cohen says the second volume is more mature than the first. “I went deeper into my own emotions,” he confides. “There’s definitely more about dating and romance. In the first book it was almost like I didn’t have genitalia. In this book, I suddenly grow a dick.”

“Until this book, I have been really reticent to put stuff about who I’m dating out there,” Cohen continues. But with expectations running high for another installment, he was determined to be more revealing. “In this one, I just thought: You know what? If I have a one-night stand, I still put it in this book.”

And naturally there will also be celebrities. “I mean, I didn’t get a whole new set,” Cohen says with a chuckle, confirming that many of his famed friends from volume one will return. “I will say there are also new famous people that come into the book. I mean, Taylor Swift appears — and the cast of Friends.”

Also returning will be Wacha, the beagle mix Cohen adopted in volume one, who has now achieved a level of celebrity all his own, with over 200,000 Instagram followers. I ask Cohen how he thinks his life would be different had he not found his pup partner. “I think I would be lonelier than I allowed myself to realize without him,” says the host.

From all indications, Cohen will head into 2017 less lonely, more productive, and surrounded by plenty of people he loves (of both the famous and less-famous varieties). But before we part company, I have to ask him about his original number one fan: his mom Evelyn Cohen, whose visits and phone calls often serve as comedic counterpoints to the diaries’ headier moments of exchanging emoji-heavy text messages with Cher and hosting awards shows alongside Martha Stewart. So what does Mama Cohen think of her son’s life among the rich and famous? “She’s amused by it,” he says. “She’s happy for me, but I think she thinks it’s all kind of ridiculous — you know what I mean? Which is good. She keeps me very grounded.”

Superficial: More Adventures from the Andy Cohen Diaries will be available November 15 — in print, as an e-book, and as an audiobook read by the author. Watch What Happens Live airs Sunday through Thursdays at 11pm Eastern on Bravo, and you can find Radio Andy on SiriusXM Channel 102.

I spoke with Andy Cohen, we discuss the potential perils of living in a gay mecca, how he avoids social media trolls getting him down, and his favorite celebrity keepsake in the Bravo Clubhouse.

METROSOURCE: You know, I’ve run into you around NYC couple of times — once walking Wacha and once at the Monster.

ANDY COHEN: Was I nice or mean?

You were lovely. But I always look at you and I think, “Wow, he is in the center of Gayville, USA; how does he go to the grocery store? How does he go out on a date? Isn’t he just constantly mobbed by gay guys who are presumptuous and wanting your time, wanting your autograph, wanting you to talk to them?”

No way, not at all. Especially not in New York. I mean, look, you’ve already seen me several times just around. I mean, I’m kind of ubiquitous in the West Village. I don’t think anyone cares when they see me. I mean, I take a few selfies on the street every day. But it’s pretty mellow, you know. I don’t think people are that excited to see me. I’ve been around a while.

I hear so many celebs demonizing social media these days, and certainly there’s an amount of negativity that’s problematic about it. But I feel like you allow the attention to buoy you in this interesting way.

Well, I mean, I’ve been fighting with Trump supporters on social media for the last, you know, six months.

Is it wearing you down?

How do get past the negativity?

I just don’t think I think too hard about it. And I think I have a very thick skin. I think both of those things are important. You have to have a thick skin, because s otherwise pretty upsetting. Or it can be.

You now have power across radio, TV, publishing. What do you see as your responsibility in choosing the people you promote — to your audience, to history, to society as a whole?

To entertain people. That’s what I’m doing. I think my responsibility is to be true to my voice and find people who I think are worthy of my audience’s attention.

Since you’re talking about dating more in the new book, how would you describe your ideal man?

Independent, strong, handsome, good sense of humor, has their own life going.

Do you have a favorite piece of memorabilia from the walls of the Bravo Clubhouse?

I mean, it’s probably the shotski. Because it was, it’s become so much part of the show, and it’s become part of the lexicon. And Jimmy [Fallon] and his wife made it for us. It’s become something bigger than just like a little wooden ski, you know.

Looking back at the year so far, can you point to any particular high point? Something that made you excited or proud?

I finished renovating my apartment, which you saw me buy in the last book. So I just moved into my brand new apartment like three weeks ago in the West Village. And I’m really excited about it, and I’m very proud of it. For the first time, I feel like I made it.

I don’t know if it’s too far to look ahead, but I was wondering if you have any big long-term goals that you’re hoping to realize for 2017 – either personally or professionally?

You’re like, “Let me get the book out first, brother.”