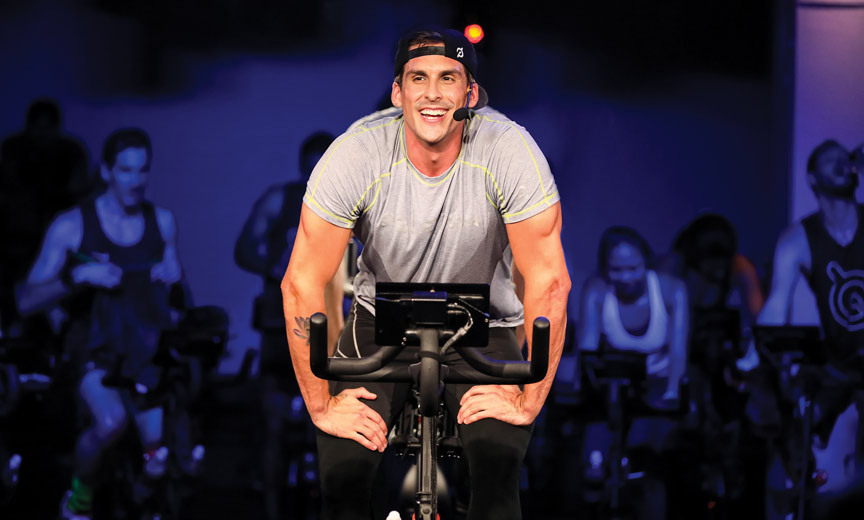 How Peloton Master Instructor Cody Rigsby recycled his career in dance into helping people get fit — near and far, spinning great music and spreading LGBTQ acceptance along the way.

Cody Rigsby climbs upon his instructor’s bike and studies the room. He looks out upon the faces of his regular students, many who come to ride with him every week at Peloton, a cycling studio located near the corner of 23rd St. and Avenue of the Americas in Manhattan’s Chelsea neighborhood.

Next, Rigsby peruses a digital leaderboard to review the dozens of additional students who are joining his class remotely. He recognizes the names, though he’ll likely never meet them face to face. This is where Rigsby’s charm and energy come in handy: Not only is he expected to provide guidance for the people he can see in the room with him, but his words must also inspire thousands of riders scattered across the country.

Rigsby, a former commercial dancer, works at Peloton’s only “live studio,” with its fast-moving cameras gliding across the ceiling revealing just how different this workout space is from others in the neighborhood. There are 60 stationary bikes inside, however that number will only account for a small portion of the roster participating during any given session. That’s because the majority of Peloton’s customer base rarely attends class in person. People from Columbus, Milwaukee, Austin and everywhere in between have purchased their own Peloton brand bikes to ride along in the comfort of their own homes, where they can log in to attend “live” classes whenever they want to break a sweat. It’s up to the studio’s in-house master instructors to deliver the same fast-paced workout to everyone – even those tuning in from hundreds of miles away. Thankfully, Rigsby has no problem connecting with fans near or far: his unmistakable passion and infectious personality seem designed to reach the ends of the earth.

Rigsby’s romance with New York City begins the same way it does for so many young performers: He packed up and said goodbye to his home state of North Carolina nearly a decade ago in search of creative opportunities. His first six years in NYC were busy ones, as he spent long days darting from audition rooms onto stages, often performing as a backup dancer for artists like Nicki Minaj and Katy Perry during high-profile film and television segments. The work came steadily for Rigsby, who at the time believed his fitness level was more than adequate to support his chosen career path. Being in shape came mostly as a byproduct of time spent dancing more than anything else. It wasn’t until a big opportunity presented itself that Rigsby realized it was time to kick the resistance up a notch. 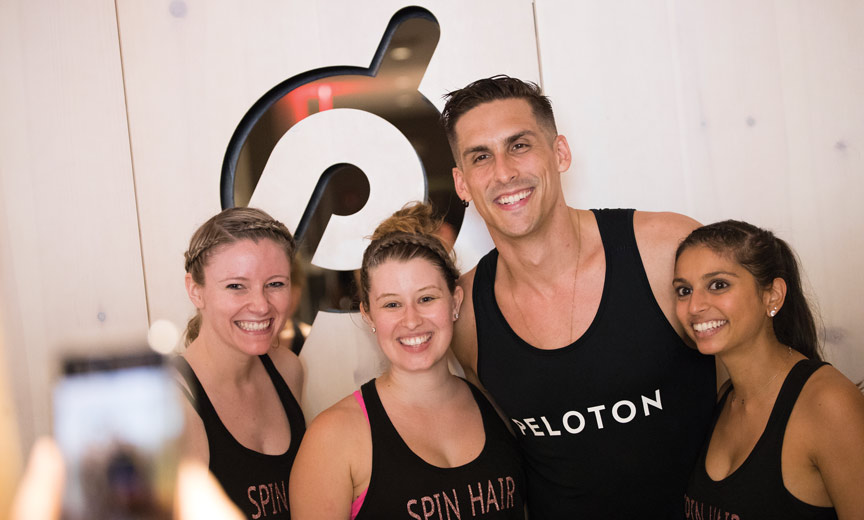 “A choreographer with whom I was closely connected reached out to me about a Victoria’s Secret Fashion Show gig,” Rigsby recalls. “He told me that he wanted to book me, but that I needed to get my body in check first.” This loaded job offer struck a chord for Rigsby. He was familiar with the gym, but was quite green in terms of pure physical training. As a result of this reality check, Rigsby soon began to concentrate on nutrition and sessions with personal trainers, which helped him come to understand that fitness could be more than just a tool for professional advancement for him: It could be a way of life.

As Rigsby’s musculature became more defined, so did his plans for the future. Though performing still served as his primary means for paying bills, the fulfillment he once found in it began to take a backseat to his newfound love for fitness. While working in a burlesque club on the lower east side, Rigsby received an e-mail from a previous employer about a new cycling studio, and before he knew it, Rigsby was doing a new kind of performance – this time in front of some health-savvy directors.

Groove is at the Heart

“They liked my personality,” Rigsby says. “One huge talent I had to leverage was my natural camera presence. It’s something that’s so unique to the Peloton job, but matters so much when you’re teaching out to four cameras that reach thousands of people across the country.” His knowledge of dance was also integral in the creation of Rigsby’s signature “Groove Ride” – a 45-minute, choreography-based class that integrates riding to the beat along with other timed workout movements such as crunches, handlebar push-ups and free weight lifting.

Rigsby’s transformation from dancer to instructor was gradual; he found it surrounded him organically with the elements of performance he most loved, including music. “Music is the shining star of any workout we do, either in group fitness classes or by ourselves,” Rigsby attests. “Sometimes you need fierce beats that will give you tons of energy in a cycling class; other times it’s the lyrics and rhythm that inspire and craft that journey. When you’re trying to be your best self, and you have that piece pushing you, music becomes an essential part of the workout.” Playlists are an area in which he finds that fellow LGBTQ artists lend some flavor to the class vibe. Rigsby is a self-proclaimed lover of house and circuit music, not to mention underground club bangers. Legends like Peter Rauhofer (aka Size Queen) and Junior Vasquez often find their way onto Rigsby’s heart-pumping soundtracks. 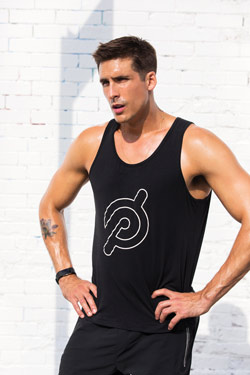 “I love to discover new music and share that with people,” Rigsby says. “It’s a goal of mine to make people curious. I love when people come up to me after class and ask, ‘Hey, what was that song?’” Cody’s selections range from familiar and fun to deliciously obscure. “I did a ‘History of House’ series a couple of years back and used some Honey Dijon,” Rigsby adds. He’s referring to Honey Redmond, an acclaimed Chicago-born, New York City-based tech-house producer who also happens to be transgender.

While sharing new music with riders is one area of passion, Rigsby says he loves his job for another big reason. ““Being visible in the homes of people who don’t have gay friends, or who have maybe never even met a gay person gives me the opportunity to be a positive influence in their lives,” Rigsby says. He pauses thoughtfully. “I’ve had riders tell me that they have gay sons, and they’ve been better able to connect with them because of who I am. It’s incredibly endearing. It just goes to show how small steps can have a huge impact, almost a viral effect, on people.”

The Journey is the Destination

But this impact is, in some ways, only just beginning. In January 2018, Rigsby was promoted to master instructor. He teaches five 45-minute rhythm rides each week — plus an additional three short-form classes. Recently he had the opportunity to engage with his out of town fans when Peloton invited a thousand bikers to New York City for a Home Rider Invasion. “Connecting with my riders on social media alone is so inspiring. They keep me going every time,” Rigsby says, emotion welling in his voice. “But getting to meet them in person is a whole different experience. One woman, who was probably in her 60s, told me that my class brings her so much happiness. She explained that at her age, she often feels invisible, but not when she’s riding with me. I found that very touching.”

Rigsby’s positivity is contagious, and it may be his most important tool for healthy living. It’s the quality that has helped propel him from casual gym goer to master instructor. He hopes his dedication and upbeat take on life can serve as a beacon of hope for those who see health-conscious living as a point of stress. “We try to compare ourselves to others, but [working out] is not that deep,” Rigsby says. “It’s one step on our journey. Your best self can’t be compared to anyone else. You must be fearless enough to just show up, and the rest will fall into place.

Check out Cody’s 6 Habits of Healthy Living and a Rigsby-inspired playlist. 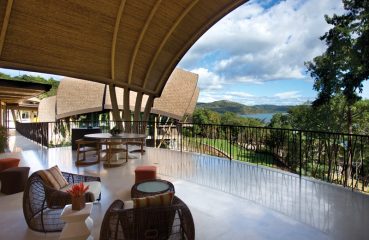 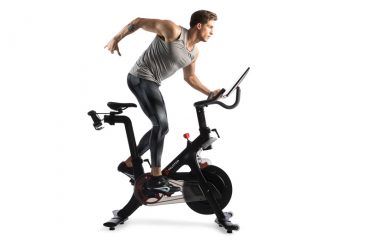 Cody’s 6 Habits of Healthy Living Man cannot thrive on cycling alone. It takes a full routine to keep the mind and body in tip-top shape. Cody shares some of the healthy habits...