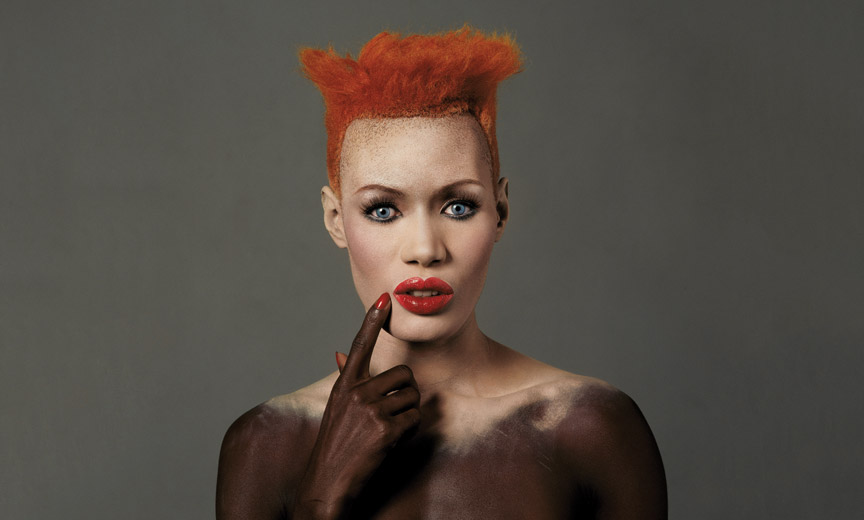 For Changing Her Mind…

Over a decades-long career, Grace Jones has embraced change: she rose to prominence as a model on both the catwalks of New York and Paris, and the covers of Elle and Vogue. But then she ditched the runway for the recording studio, where she’d soon also trade disco for a more experimental sound. She then set her sights on the big screen, landing in projects from cult camp (alongside Arnold Schwarzenegger in Conan the Destroyer) to iconic action (she made a stunning Bond girl in A View to a Kill) to over-the-top comedy (giving birth to her own signature fragrance as Strangé in Boomerang).

Recently, she made another big change: In the opening line of her song “Art Groupie,” she famously declared “I’ll never write my memoirs,” but now she’s used that very line as the title of her own fascinating memoir, published this fall by Simon & Schuster. The book is fabulously packed with celebrities — she shares a joint with Marianne Faithfull, hangs out with Andy Warhol, and Debbie Harry throws her a baby shower. But even more importantly, the book shows how, through the years of gravity-defying headgear and flawlessly forward fashion, one thing has never changed: her commitment to being an unapologetic boundary pusher.

That’s why Jones is our cover girl for this “People We Love” salute to change: She’s a master of reinvention who never lost sight of herself.

You might also like Did She Invent “Fierce?” See “Grace Jones A-Z: The Life of an Icon”