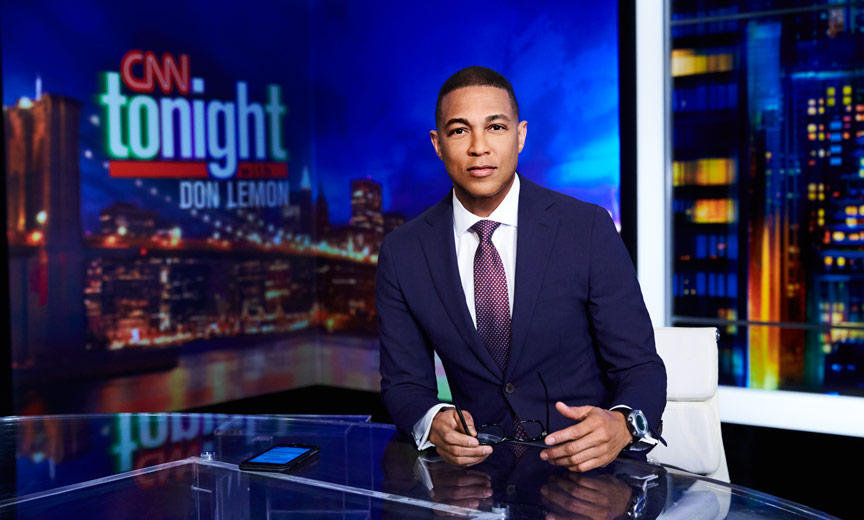 Not everyone is a fan of our People We Love cover man. Less than two weeks before the midterm elections, CNN anchor Don Lemon was one of many singled out by a bomber intent on silencing his targets. That night, Lemon responded — not only to the bomber but also to Donald Trump, who blamed the media for the uptick in violence. “I’m pissed,” Lemon told colleague Chris Cuomo on live television. “I could have been mourning youem>. You could have been mourning meem>. God forbid, we could have lost our colleagues, and this person who calls himself the President of the United States does not have the testicular fortitude to own his part in all of this.”

The 52-year old (and recently engaged) gay host of CNN Tonight with Don Lemonem> had just ended the previous week on a conference call with the NYPD about only one of the open credible threats against him. “And now, the middle of this week, my first phone call was to CNN security, because the super in my building said, ‘How do we handle your mail today and going forward, Mr. Lemon?’”

Huddled in overcoats outside an evacuated CNN Headquarters, Lemon and Cuomo stood in defiance of a terrorist’s attempt to muzzle them. “I have been in this business for 27 years,” he fumed to Cuomo, “and I’ve had credible threats against me for first time in the past couple of years. I have security now — for the first time in 27 years. You know the only difference now, versus the other 25 years or so … is Donald Trump.”

Read Next | Gift Guide 2018: Plug Your Ears with the Best Earbuds on the Market

Over the past decade, Lemon has built a reputation at CNN as an unflappable interrogator, a TV host given to on-air flashes of humor and passion, but a man always and relentlessly himself — which includes being gay. His humanity and the casual way he wears his fame have won him legions of fans. Conversely, no less than the President of the United States has attacked him in a tweet as “the dumbest man on television.” Lemon devotees consider such insults a badge of honor — earned in part by calling Donald Trump out as a racist to a global audience.

“Look,” said Lemon, tucking into his lunch at a Harlem eatery in early October, “my job is to suss out facts. And so if you look at the facts, the only conclusion that you can come to, unless you’re a really partisan animal or you’re just completely ignoring reality, is what I said about the President. I’m not worried about defending the story, because the story is about his actions and not about me. And I’m simply stating the facts.” 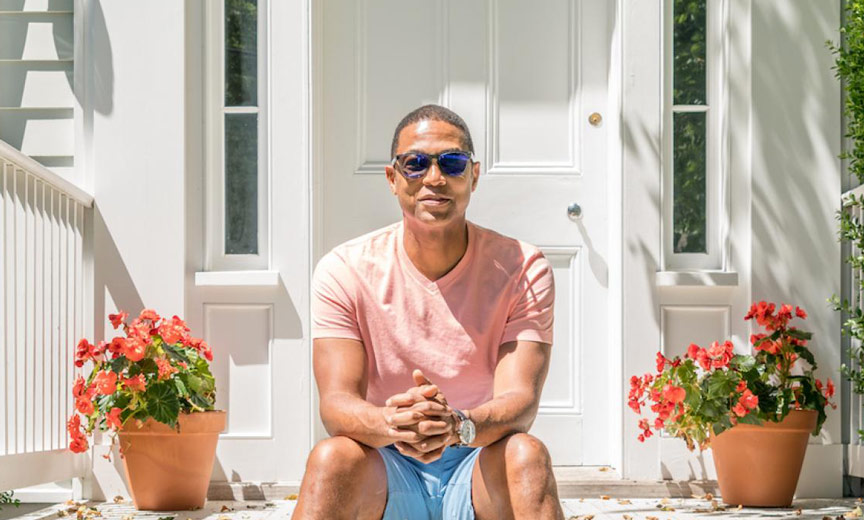 “A lot of people — especially people of color — were like: duhem>. And someone said, I forget who it was, but I thought they were exactly right: They were like, ‘Congratulations to Don Lemon for giving us breaking news from 2015,’ when I said it in 2018.”

Read Next | People Are Freaking out over This Koreatown Foodie Find

Lemon, like colleagues ranging from Anderson Cooper to Sean Hannity and Rachel Maddow, have remade broadcast news from what it was only a  few short years ago. Gone are the days of Peter Jennings and his forebearers who fastidiously avoided opinions. Today’s journalists are in dogged pursuit of truth, which can often depend on how facts are assembled, interpreted — or ignored.

“I don’t know if it was necessarily good to have one person who’s the voice of God,”  Lemon muses. “We’re creatures of habit. We want our own beliefs reinforced, and if you don’t seek out those other places or agencies to get your news or your information,  you become complacent and stuck and limited. So I think in order for all of us to broaden our view of the world and to figure out what the facts are, we need to look at different places to get our news and be open to it. People watching the news today want authenticity. They don’t just want the news; they want to know how to feelem> about the news. So I do feel like I’m creating a community; and that one is being created around me. The same is true of anyone who sits where I do.”

In the course of growing up in a family that “worked hard for everything we had” and surviving sexual abuse at the hands of a teenager, Lemon learned to use other people’s stories to broaden his own experience and then retell their tales. “I grew up in Louisiana; Baton Rouge,” says Lemon, “and New Orleans is included as a part of that. And wherever we went, I would just go to different peoples’ tables and talk to them. I don’t know why. I just always asked questions. I don’t know what awakened that interest. The first big story that I can remember — and barely — is Watergate. I remember my grandmother having the television Watergate hearings on, and I remember the President leaving the White House for the last time. I had no idea it was such a big thing; I was a kid. I think as I got older those stories interested me and inspired me to do what I do.”

He has much to show for his effort. Lemon has an Edward R. Murrow Award (for coverage of the D.C. sniper’s capture), an Emmy, and accolades aplenty for his work on the AIDS epidemic in Africa and Hurricane Katrina. Ebonyem> magazine considers him one of the nation’s most influential African-Americans.

Read Next | Drinkable Collagen May Have Health Benefits

Still, his chosen path hasn’t exactly been smooth. He’s come under fire most recently for summing up Kanye West’s visit to the White House as  “embarrassing” and a “minstrel show.”Critique comes with the territory, he says: “If you’re critical of others, you should expect the same. But I do have to say that as much discrimination as there is towards gay people  — and it’s awful — I have received far more for being a person of color than for being a gay man.”

“I’m sure some of the criticism of me I read and I see is rooted in homophobia,” he reasons. “People will be upset about something I say on television, and they’ll write something homophobic on a social media site. And so I’m sure there are many people thinking that, but they don’t come on my show and sayem> that, right?”

Lemon lives his life as openly and casually as circumstances will allow. He’s been partnered for two years this month to real estate agent Tim Malone, whom he met at a restaurant in the Hamptons a few years back. “He was seeing someone, and I was playing the field,” he laughs. “They broke up, and we got together, but we knew each other as friends for a year and a half.”

“I’m never sure why people are interested in me,” Lemon muses.  “Is it because of me? Is it because of what I do? Is it because they think they’re gonna get some sort of fame, or…  I have no idea. So in that sense, dating was a bit difficult. And it’s probably why I was single for so long, ‘cause I was just so focused on my career and probably not so trusting of people wanting to get into a relationship with me.” 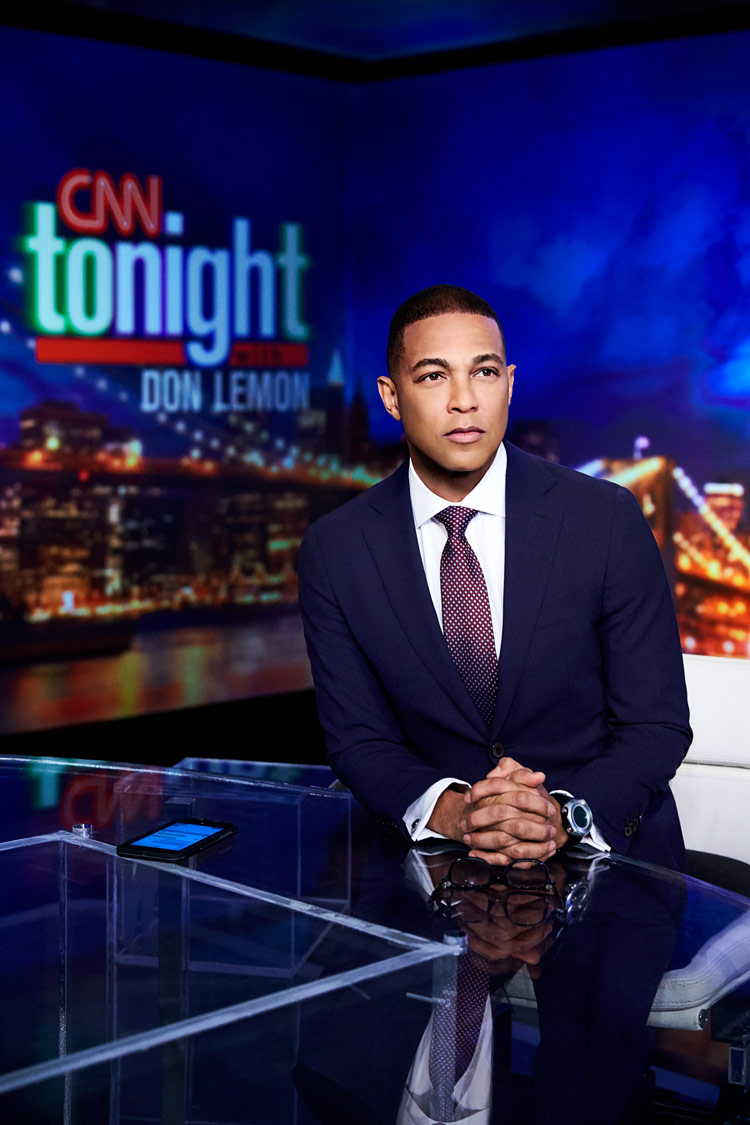 Read Next | Passion Is Where You Find It

If tonight is one of the five nights a week Don Lemon is at work, he’ll go in, sit at the anchor’s chair and try to explain the world and why it is the way it is. “People probably think that I become a different person on the air and off the air; that I’m putting on airs.  My producers will tell you: I am the same off air as I am on air.”


Lemon may wear the mantle of his responsibility lightly, but like a champion bodybuilder, he isn’t afraid to flex some muscle when it’s called for: “What people always have to remember is: I have the last word, right? I’m dealing in fact and reality,” he concludes, “and so everyone who’s on, or many of the people who are on, may have opinions and biases and want you to believe certain things. But I’m going to make sure that you get the truth and the information. You may not like it. It may not reinforce your beliefs. I’ll let you have your piece, but let me tell you: here’s the truth.”

What of the talking heads who cry alternative factsem> and fake newsem>? “Very simply, you don’t have to give everyone a platform. And I don’t. I would allow anybody on if they are dealing in truth. Otherwise, why bother? It is a privilege to appear on CNN, it’s not a right,” he says.

Some might feel the weight of the world on their shoulders. Not Lemon, who rises to shake hands. “I have a new dog, a mini-poodle mix, I have to walk,” he says, headed for the door. “He is on his own schedule, and I don’t want to come home to a bunch of surprises.”

Read Next | Booze News You Can Use: Vinegar Is the Mixer of the Moment