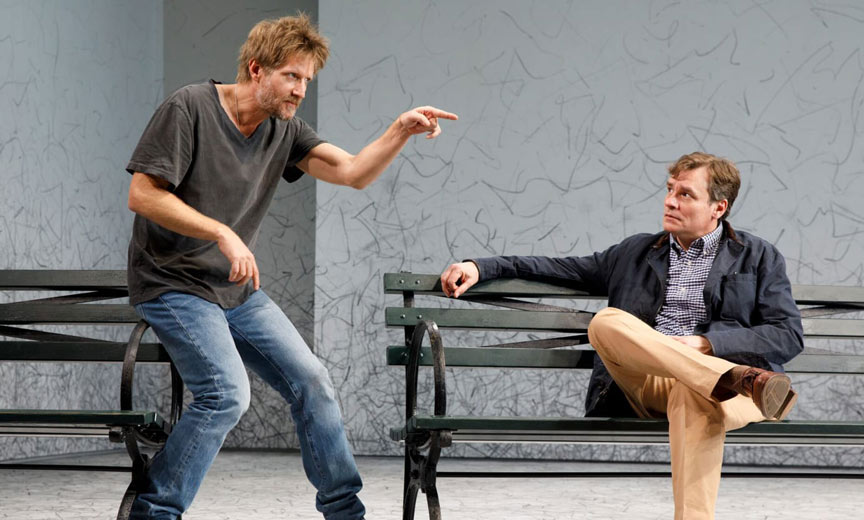 Two short works by a legendary gay playwright merge as Homelife and The Zoo Story become Edward Albee’s At Home at the Zoo. You can find this evening at the Pershing Square Theater Center through March 18.

The first time I ever encountered Edward Albee’s The Zoo Story was in an Intro to English Studies class as a sophomore in college. I remember being moved by Albee’s signature dark humor and ability to capture the essence of humanity, but since then, time had erased much of the finer points from my memory. When I discovered that Signature Theatre was staging a production as part of the larger Edward Albee’s At Home at the Zoo: Homelife & The Zoo Story, it sounded like the perfect double bill to fill an evening.

The play begins with Homelife (written as a prequel to The Zoo Story) and tells the story of Peter (Robert Sean Leonard, House), a middle-aged, upper-middle-class man living a perfectly comfortable and straight-laced life with his wife, two daughters, two cats, and two parakeets in an apartment on NYC’s East 74th Street. Peter and his wife, Ann (Kate Finneran), are engaged in a conversation  that plunges them into an exploration of how their contrasting visions of marital bliss can be merged to allow both to experience the love for which each has searched.

Peter, for his part, loves his wife and has attempted to create a stable and happy home for her. However, he is rather distant, often lost in a trance while reading the textbooks he publishes for a living. Under the impression that their marriage is proceeding as it ought to, Peter is surprised when his wife expresses her desire for more. She complains to him that he never follows her when she gets out of bed in the middle of the night and begs him to make love to her with animalistic passion. She longs desperately to be seen and felt by her husband, to connect with him in that most human of ways.

In a conversation laden with the serious (a contemplation of an elective mastectomy) and uplifted by the absurd (a thought experiment about how their lives would be altered by the introduction of a little chaos), Finneran’s delivery is superb. Playing off of Peter’s muted personality is no easy feat, but Finneran makes the story move to her tempo, creating an ebb and flow of humor and sadness that made Ann’s passion feel real and her desperation feel raw.

After an intermission, the action resumes with The Zoo Story. Peter has gone to the park to pass his Sunday afternoon in a way he often does: reading a book. He is quickly interrupted by Jerry (Paul Sparks), a rather unkempt and erratic man who is very much Peter’s opposite. Determined to engage Peter in conversation, Jerry asks numerous times whether Peter wouldd like to hear the story of what happened during Jerry’s trip to the zoo earlier that morning. His verbal journey takes him “a very long distance out of his way to come back a short distance correctly,” but Jerry never quite makes it back to the zoo. Instead, he tells a mélange of tales about his fellow boarding-house residents — “the black queen, the Puerto Rican family, the person in the front room whom [he’s] never seen, the woman who cries deliberately behind her closed door” — culminating in the epic moral center of the play: his daily battle with the landlady’s dog (whom Jerry calls f“malevolence with an erection”).

Sparks’ Jerry stays just on this side of out-of-control, much to the betterment of the piece as a whole. His story-telling is, at times, wildly flamboyant, with gesticulations and articulations fluctuating from muted to dramatic — consumed with passion. He is, at once, both shocking and familiar. His defiance of social convention in prodding a disinterested stranger with personal questions is uncomfortable but understandable. He is one of the people most of us walk past every day without much consideration, a down-on-his-luck Everyman with the supremely human desire to connect to anyone or anything. Sparks makes Jerry’s need for human compassion incredibly palpable: we feel his quest for an indication that life is not a solitary experience.

Overall, the Signature Theatre’s production was pitch perfect. Under the direction of Lila Neugebauer, the cast has created a moving, thought-provoking presentation of Albee’s work, which adds up to a scintillating evening of theatre. The piece runs through March 18th at the Pershing Square Theatre Center (480 West 42nd Street between 9th and 10th Avenues) as part of the Signature Ticket Initiative: A Generation of Access, which endeavors to make theatre accessible to all with $30 tickets. 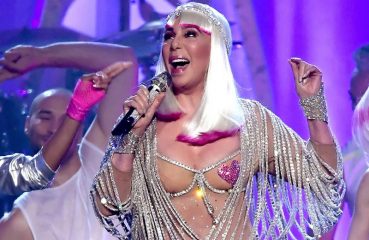 First came marriage equality down under. Now, just when we could all use more cultural exchange, New York will be getting Kylie Minogue for Pride and Sydney gets Cher. Both have... 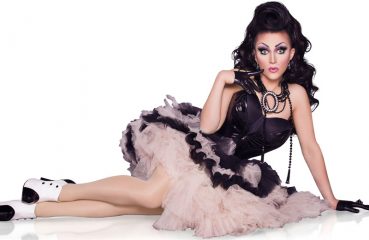 It’s well understood at this point that just getting onto RuPaul’s Drag Race is enough to change the direction of a drag queen’s life forever. Booking fees, Instagram...